The Americans got it wrong. By seemingly doing nothing but trying to preserve his seat in power, the Israeli prime minister is in fact advancing a process that makes a Palestinian state an impossibility.

In his Atlantic article on the growing crisis between Jerusalem and Washington, Jeffrey Goldberg quoted American officials slamming Netanyahu, one now-famously called him “chickenshit.” The substance of the criticism was that he lacks the “guts” to strike Iran and is only interested in “protecting himself from political defeat.”

Beyond the damage Netanyahu and his government are causing Israel in the international community – hurting ties crucial for a small country with limited resources in a complicated region – I disagree with the American diagnosis. In Netanyahu’s case, preserving his rule without any apparent progress towards a clear goal is part and parcel of his plan to deepen the deeply-ingrained process of preventing a Palestinian state in the West Bank and splintering the Palestinian people. Even if Netanyahu did not start these steps, he is propelling them with pristine efficiency. 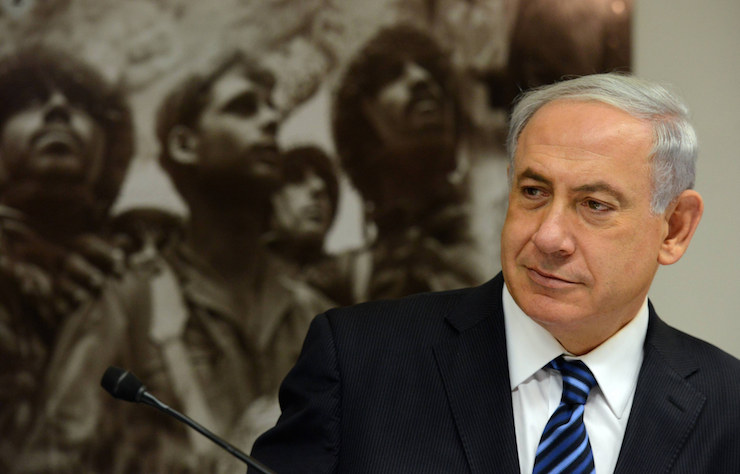 Every day that Netanyahu tries to maintain his seat is another day of settlement construction in the West Bank, another day of Palestinian displacement, of destroying Palestinian assets and other grave human rights violations; another day in which Netanyahu’s strategic goals are being achieved.

Unlike the objective of peace and ending occupation, Netanyahu’s objectives don’t have a big fan base in the international arena. He knows this all too well, and this is why he cunningly operates to maintain the status quo. Ostensibly this means doing nothing; in practice it means rapidly changing facts on the ground in the West Bank.

His declaration of support for the two-state solution at Bar Ilan University and the negotiations led by Kerry were conducted in parallel to government actions on the ground – constituting an integral part of his strategy.

Netanyahu surely must have taken the Americans’ criticism as a complement. They thought they were insulting him but in fact they were praising him. They revealed that they do not understand Netanyahu’s strategy – mistaking his effective methods for fear and lack of political vision. They also positioned him perfectly in his battle for right-wing voters. He is simultaneously standing tall in front of the Administration while winking to his benefactors and allies in the Republican Party ahead of Senate elections. At the same time, he is not “giving in” to Bennett, who perfectly fills the role of the settler youth who makes the prime minister appear like the experienced, rational centrist.

A trip to the West Bank and a perusal of reports by human rights organizations, like the recent B’Tselem report on the Burqah village, can attest to these processes. While Netanyahu’s rhetoric focuses on Iran, ISIS, the war in Gaza and the high cost of living, the West Bank continues to undergo significant changes and the Palestinian people continued to be divided and conquered.

Netanyahu is the victor in Goldberg’s Atlantic story. And he continues to be the leading candidate for Israeli prime minister, precisely because of his ability to sell his de facto strategy of change as a status quo strategy.

David Zonsheine is the chairman of B’Tselem.

Related:
‘Chickengate:’ In the confrontation between Bibi and Obama, Palestinians are only a sideshow
How the very concept of human rights has failed Palestinians
Replacing the peace process with a civil rights struggle