Prime Minister Benjamin Netanyahu gave his much-anticipated speech at the United Nations General Assembly today. He started off by leaning casually on the podium and surveying the people in the hall. At one point he punctuated his speech with the idiomatic expression, “Yeah, right!” He gratified his fans on Twitter by lubricating their virtual drinking game with several much-anticipated references to the Holocaust (#drink!), radical Islam (#drink!) and – most of all – Iran (#drink #drink #drink).

In fact, Iran inspired Netanyahu to draw a diagram so that his simple-minded audience would understand how close that state was to developing a nuclear bomb. 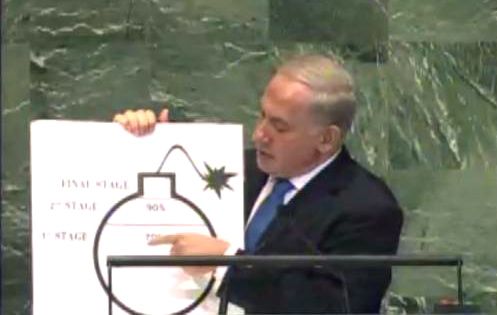 Netanyahu uses a sophisticated diagram to explain how close Iran is to developing a nuclear bomb (photo: screenshot)

A few people commented that it looked as though it were drawn by Acme Cartoons and that it should have had the word BOOM!! drawn across it in red letters.

Netanyahu followed up by taking out a red marker and drawing a thick line at the 90 percent line – i.e., *this* was where the red line had to be drawn. Or else! 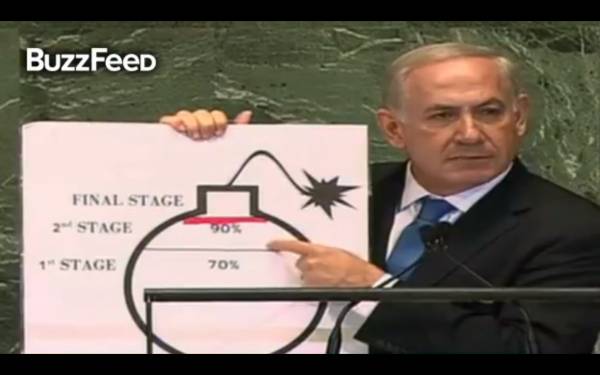 But even as people jeered on Twitter at the cartoonish diagram, Buzzfeed’s Zeke Miller suggested that Bibi’s buffoonery might have disguised a clever tactic. Who, now, remembers the speech Mahmoud Abbas gave less than one hour earlier?