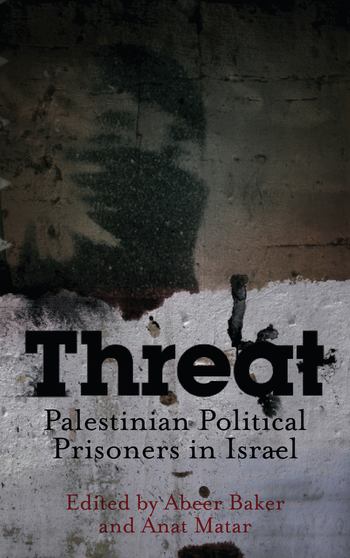 The Israeli military legal system  is one of the most under reported yet crucial components of Israel’s system of control over Palestinians in the occupied West Bank. Since 1967, Israel has controlled the entire area of the West Bank using two forms of legal enforcement based on two different legal codes –  one for Israeli settlers and one for Palestinians. Palestinians are subjected to military law administered by the Israeli army. Far from providing justice for Palestinians, the military legal system functions as a foundational control mechanism over Palestinian life in all realms. In a new book from Pluto Press, Israeli professor Anat Matar and Palestinian lawyer Abeer Baker edit a collection of informative essays regarding the military justice system and Palestinian prisoners in Israel.

The parity of research in English on Israel’s military court system  is laughable given the amount of coverage the Israeli-Palestinian conflict receives in the international press. Threat: Palestinian Political Prisoners in Israel, filles this vacuum of information in a dynamic and lasting way with essays written by Israeli and Palestinian lawyers, intellectuals and human rights advocates on a variety of subjects relating to the court system.  Shortly after Israel’s 1967 takeover of the West Bank and Gaza Strip, military courts were set up throughout the territories to administer law and order among the residents under the command of the Israeli military.

The Fourth Geneva Convention establishes the right of an occupying force to legislate military orders and amend existing legal structures to ensure ‘security and public order’. However, according to sociologist Lisa Hajjar in her excellent book “Courting Conflict: The Israeli Military Court System in the West Bank and Gaza,” Israel has tended to emphasize that the convention is not binding on the state in the occupied territories on a de jure basis. Therefore, Hajjar argues, the Fourth Geneva Convention has been drawn upon to justify the making of the law but has been rejected as a framework for the content of the law.

From a diplomatic standpoint, the way in which Israel administers law over the Palestinians and Israeli settlers is immediately significant for understanding if and how Israel is practicing apartheid, or at least legal apartheid, over Palestinians. From this point of view, the problem in the West Bank began with the introduction of Jewish settlers into the occupied territories shortly after the 1967 war. Instead of subjecting the Jewish settlers to military law, Israel decided to allow them to literally embody Israeli civil law wherever they went in the West Bank and Gaza. In other words, as soon as I, an Israeli Jew, walk into the West Bank, the laws of the state of Israel follow me around. If I am involved in a crime with a Palestinian, I will be tried according to the civil laws of the state of Israel while the Palestinian will be subjected to the laws of the military court system. The system of law I am subjected to affords me far more rights than the military system which a Palestinian is subjected to by Israel. This example is the very definition of separate and unequal application of law.

Sharon Weill’s essay “Reframing the Legality of the Israeli Military Courts in the West Bank: Military Occupation or Apartheid?” is one of the strongest in the book and deals directly with the aforementioned issue. Through a detailed discussion of the separate legal systems which exist for Israelis and Palestinians in the West Bank, Weill convincingly proves that Israel is practicing a form of legal apartheid in the West Bank.  She concludes her chapter with the following quote by Sir Adam Roberts:

The law on occupations could be so used as to have the effect of leaving a whole population in legal and political limbo: neither entitled to citizenship of the occupying state, nor able to exercise any other political rights except of the most rudimentary character….the law on occupations might provide, paradoxically, the basis for a kind of discrimination that might bear comparison with apartheid

Yael Berda, a human rights lawyer and PhD candidate at Princeton University, notes in her chapter titled “The Security Risk as a Security Risk: Notes on the Classification Practices of the Israeli Security Services” that the intellectual refinement of the Israeli military legal system takes place largely in Israeli universities.  She writes,

In recent years, a constant flow of military and anti-terrorism experts have entered and graduated from Israeli universities, colleges and strategic research institutes, merging the security apparatuses with bases of academic power in the field of security studies and public policy.

Unlike other chapters in the book, Berda’s chapter provides the factual evidence needed to establish a clear link between Israeli academic institutions  and the maintenance of the occupation. Based on the evidence, it is not just the military establishment but also the academic establishment which has connived the continuation of the  military court system.

From the classification of most prisoners as ‘security risks’ despite concrete information to support the claim to the routine blocking of family visits for many Palestinian prisoners,  the book reads like a laundry list of Israeli violations of Palestinian rights in the West Bank and Gaza. There is a wealth of information, most published for the first time in English, making this book an invaluable resource for anyone with a desire to understand exactly how Israeli control of Palestinians is conducted in plain sight of the international community.

You can purchase Threat: Palestinian Political Prisoners in Israel through Pluto Press.