In a country guided by ethno-nationalism, an excavation site is rarely ever just about archaeology.

The village of At-Tuwani, in the West Bank’s south Hebron hills, rises above Israeli route 60 as you come down from the city of Yatta with unmistakable roundness.   It’s smooth shape is a telltale sign of centuries, if not millennia, of human habitation.  The village wraps around Tel Tuwani, a hill that has slowly grown as one layer of life has replaced the next.  Some are readily visible.  Old cave homes now serve as animal stables, several feet below the current road level, with homes made of large stones above them.  The concrete homes of a new generation are being built yet another layer up.  Old Roman-era tombs and wine presses are often visible on this hill and the hills nearby where villagers graze their sheep and goats.

Now some of these layers are being stripped away, inspected, and studied.  A Byzantine era church, long known by the residents, begins to take shape.  Mosaic floors appear in the dirt where before sheep gathered to be watered.  The traditional taboun (clay oven), where the owner of this land makes bread, is suddenly surrounded by an excavation site.  For the archaeology buff, it’s fascinating.  But it has the Palestinian residents on edge, because the digging is being done by the Israeli Civil Administration (the Israeli military government arm in the Occupied Territories), and like anything else in the West Bank, ownership of land and the heritage buried beneath is rarely straightforward.

“They’re looking for ancient Israeli things,” says a woman on whose land the dig is taking place.  “People are worried that if they find something Jewish, what happened in Susiya could happen here.”

Susiya, the name of both a nearby Palestinian village and an adjacent Israeli settlement, is a good example of the politics that often accompany archaeology in Israel/Palestine.  The settlement was started in 1983, near the Palestinian village of the same name.  Three years later, the Palestinian village was demolished and its residents evicted to make way for an archaeological park because excavations had uncovered the ruins of a synagogue that dated from between the 4th and 7th centuries AD.  The villagers returned but their houses were demolished again.  Houses and caves belonging to the Palestinian residents have been demolished on five occasions.  They now live in tents, scattered around the Israeli settlement and archaeological park, each family on its own land and are subject to regular attacks and harassment by Israeli settlers as well as the threat of a further eviction. 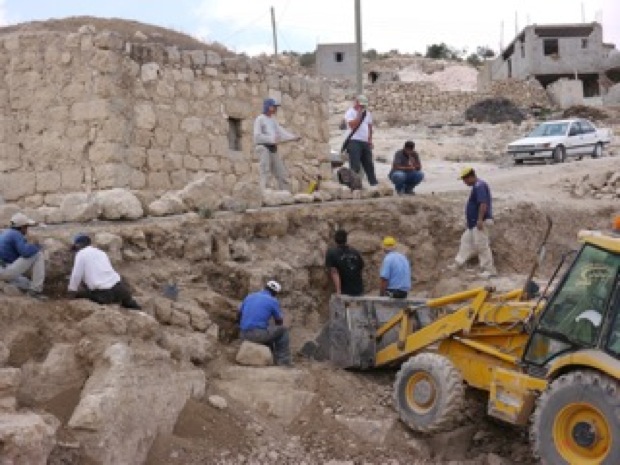 The archaeologist overseeing the dig in At-Tuwani, who is anonymous, as he was not permitted to speak to the press, laughed at the suggestion that something similar might happen there.  “This is for the people here to enjoy,” he said.

“Liars,” was the response of another village resident, Mohammed.  “They have an old map from Turkish times and say they are looking for an ancient well.  It’s better if they don’t find it.”

The excavation began when the village tried to get permission from the Civil Administration to put in running water and to approve new construction of houses.  For years the village tried to bring in electricity, running water, and build new houses but had their efforts stymied by the Israeli military.  While the Israeli settlement of Ma’on and settlement outpost of Havot Ma’on, several hundred meters away have steadily grown, the village has been subject to multiple demolition orders, enforced on four occasions including the original village mosque, and stop-work orders.  After years of resistance and increased international pressure, At-Tuwani seemed close to getting approval for its electricity, water, and building projects.  However, the last required step was for the archaeologists to sign off, and before doing so they wanted to dig around a little.  Each morning a couple van-loads of Palestinian laborers arrive and begin the careful work of digging and dusting off the rocks beneath, all under the watchful eye of a government-employed Israeli archaeologist and an armed Israeli guard.

Yonaton Mizrachi, of Emek Shaveh, a nonprofit organization of archaeologists that, according to their website “is working to change the role of archaeology in the Israeli-Palestinian conflict”, is cautiously optimistic that At-Tuwani will not be the next Susiya.  After inspecting the site, he said there are finds from the Byzantine and Abbasid periods.  “I didn’t see any Jewish finds,” he said,  “Not that it should matter, but I understand the fear they have.”  He added, “I’m very skeptical about anything the Civil Administration does in the West Bank, but if there’s a slight chance that they are doing good work, that’s good.”

One of At-Tuwani’s leaders shared Mizrachi’s optimism.  He believed the dig would be finished at its scheduled date, the 1st of July, in time to put in new water pipes.    He also added a word of caution though.  “But anyway, we never trust them, so we will wait until July 1.”

Since the writing of this article, the taboun oven mentioned above has been destroyed.  The archaeologists decided they wanted to dig underneath it.  The frustrated landowner, who does not expect compensation, said, “We’ll build a new one, but we’ll wait until they’re finished and gone.”  In the meantime, they will have to go to their neighbors’ to bake bread.  The digging has also creeped behind the back of the women’s cooperative building and into a neighbor’s land, near a small structure used for storage.  It isn’t clear to village residents what the extent of the digging will be.  It seems discovering the details of the lives of At-Tuwani’s ancient inhabitants takes precedence over the daily lives of those living there today

Palestinian names have been changed due to the sensitivity of the topic.