Police initially denied using force against Ayman Odeh, who was shot in the head and back with sponge-tipped bullets moments after a Bedouin man and a police officer were killed in a tragic incident. 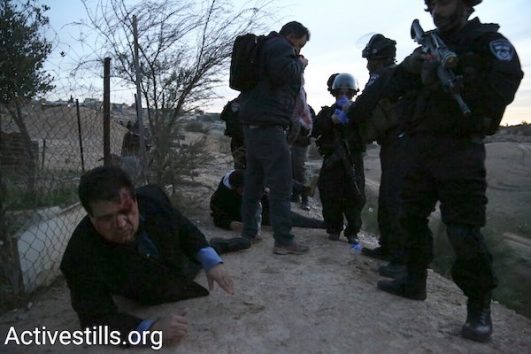 Newly released footage shows Israeli police assaulting Palestinian member of Knesset Ayman Odeh at a home demolition during which one Bedouin man and a police officer were killed earlier this year. Police told +972 Magazine that Odeh had been struck by protesters’ stones at the time, only to change their story in the hours and days that followed.

The video, shot by an Al Jazeera cameraman, appears to show a group of Israeli riot police trying to block Odeh’s path as he sought to check on possible injuries after gunshots were heard. After a bit of pushing, officers use pepper spray against an unidentified man accompanying Odeh, and then spray Odeh directly in the face.

Moments later, after Odeh appears to fall to the ground in pain, officers throw stun grenades toward him and others. Police later shot Odeh in the head and back with sponge-tipped bullets, although that part of the incident was not caught on camera. The Israeli internal affairs department, part of the Justice Ministry, is currently investigating the assault on Odeh and the killing of Yaqub Musa Abu Qi’an and police officer Erez Levy. 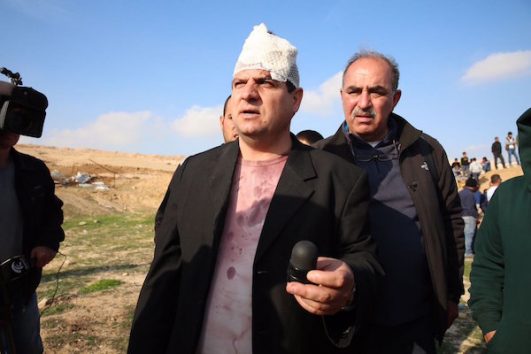 MK Ayman Odeh holding the sponge-tipped bullet he says who shot at him by Israeli forces in Umm al-Hiran, January 18, 2017. (Joint List)

Police initially declared the killings to be a terrorist incident and even attempted to tie Abu Qi’an to ISIS, before it became clear that police unnecessarily opened fire on his vehicle, causing him to loose control and veer into a group of police officers. An investigation by +972 Magazine partners Activestills, along with Forensic Architecture, played a central role in refuting the police’s claims about the killings.

The violence took place as police came to demolish a number of homes in the Negev Bedouin village of Umm al-Hiran. The entire town is slated to be demolished so that a Jewish development, called Hiran, can be built almost directly on its ruins.

“The police and government’s lies and incitement continue to be exposed. Everything we claimed from the get go has turned out to be true. The responsibility for the terrible losses of the Abu Al Qi’an and Levi families is entirely on [Public Security Minister Gilad] Erdan and [Police Commissioner Roni] Alsheikh,” MK Ayman Odeh said about the footage released Wednesday.

“The only justice what we can expect to offer the Abu Al-Qi’an family is to uncover the truth, to recognize the village of Umm al-Hiran, and to allow its residents to remain on their land,” Odeh continued. “And toward that goal we will continue to struggle.”

Asked whether police were aware of the incident or whether the officers involved have been punished, a police spokesperson referred +972 Magazine to the Justice Ministry’s internal affairs department.

Asked whether on principle the Israel Police has a policy or position on the use of force against members of Knesset, the spokesperson responded: “The law applies equally to everyone. Nobody is above the law.”

A Justice Ministry spokesperson did not respond to +972 Magazine’s questions by the time of publication. If and when a response is received, it will be added here.

The Israeli government now wants to move the residents of Umm al-Hiran to the nearby urban area of Hura, one of seven townships built to concentrate the Bedouin population in the area.

The Israeli government has made several attempts in recent years to “formalize” land ownership in the Negev, where the vast majority of Israel’s Bedouin population lives. The goal is to “Judaize” the Negev — that is, to build more Jewish towns in areas that are currently populated mostly by non-Jews.

Edo Konrad and Mairav Zonszein contributed to this report.