Former top generals and commanders in Israel have launched a new campaign that pushes for unilateral separation from Palestinians. But their messaging reminds us just how racist the notion of a Palestinian ‘demographic threat’ really is. 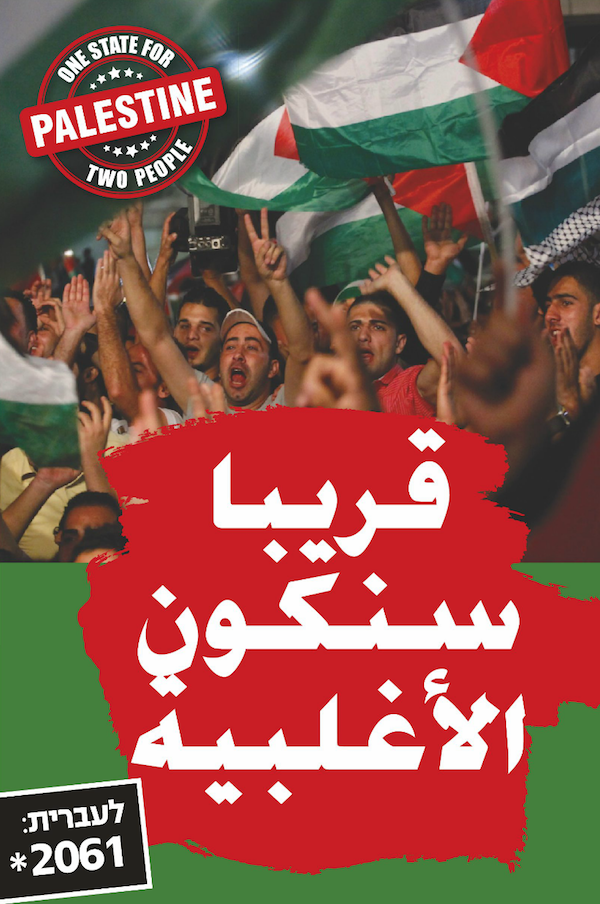 An image from a Commanders for Israeli security campaign calling for a two-state solution. The Arabic text reads, “We will soon be the majority.” (CIS)

A new campaign in Israel by a group of former top military and security officials warns that Palestinians will soon be the majority in the country. It is billed as a centrist, pragmatist approach to enhance Israel’s security in lieu of a peace process, which it may be — but it is also blatantly racist.

Launched Sunday to coincide with the Paris Peace summit that Netanyahu is boycotting, the campaign by the group, “Commanders for Israel’s Security,” (CIS) features signs in Arabic across the country that read “We will soon be the majority.” At the bottom it says to call a number for Hebrew, where you can hear the group’s founder, retired IDF major general Amon Reshef telling you: “Are you sick of these Palestinian billboards? We are too. But they will disappear in a matter of days. What will not disappear are the millions of Palestinians who live in the West Bank. They want to be a majority. And we are supposed to annex them? If we don’t separate from them we will be less Jewish and less secure. We must separate from Palestinians now!”

This is an anti-annexation campaign, meant to counter the right-wing elements in the government pushing to annex the West Bank and legalize the unequal one-state reality we currently live in. The CIS is made up of former top IDF generals, Shin Bet, Mossad and police chiefs. Out of the 248 members, I believe there are two women.

Their vision, as presented on their website, is to push a “security first” plan which advocates Israel unilaterally separate from Palestinians east of the separation barrier (deep into the West Bank, beyond the internationally-recognized pre-1967 borders), continue to have military control over the entire West Bank and keep the two-state solution in mind as a distant but ideal principle.

The campaign strategy is apparently to be provocative by using Arabic so as to wake Israelis from their apathy. But it’s not provocative, it’s just inhumane. It describes an entire people — people who are native to this land — as an existential threat, simply for living. It dehumanizes the entire Palestinian population that has been  living under military rule for half a century, portraying them as a disease Israeli Jews must get rid of. It totally absolves Israel of any responsibility for the future of all the Palestinians who have become entirely dependent on Israel for their livelihood over decades and decades of occupation, and it makes no mention of what would happen to all these Palestinians once Israel “gets rid of them.”

This kind of campaign is not new. The Palestinian “demographic threat” argument has been central to much of the thinking and many of the campaigns by Israelis on both the Right and Left since the state was founded. Recently, an initiative called “Save Jewish Jerusalem” released a horribly offensive video portraying all residents of East Jerusalem — who live under occupation and whose residency status is constantly being threatened by Israel — as violent predators intent on wiping Israel out.

This approach, by groups and individuals who consider themselves rational, liberal, centrists, is no different from Netanyahu’s declaration on election day in 2015 that the “Arabs are heading to the polls in droves.” It’s also similar to campaigns broadcast by the anti-Arab, anti-miscegenation group Lehava, who published posters in 2012 calling on Arab men to keep out of Jerusalem and stay away from Jewish girls.

It is also reminiscent of Defense Minister Avigdor Lieberman’s election sloganeering back in 2009, when his motto was, “Only Lieberman understands Arabs” — which is basically adopting the tone of those former security officials who indeed believe they know Arabs best and how to handle them best because their careers revolved around controlling their lives. How perfectly ironic that Lieberman is now in fact heading the entire security establishment.

As my fellow blogger Amjad Iraqi wrote here last year: “This obsession over the Palestinian ‘demographic threat’ has become so normalized in both Israeli and international discourse that people have forgotten that at its core, it is both a sinister and racist concept. A Palestinian’s personal character, their advancement in society, and even their indifference to politics mean little to the state — it is their blood that determines their status and defines them as a danger.”

Israeli officials, politicians and policymakers clearly believe the best way to get through to Israelis is to appeal to their anti-Arab sentiments. That speaks volumes about the reality we are living in.