A new one-man play, staged to mark the 69th anniversary of the Nakba and 50 years of occupation, brought Gaza, Ramallah and Yarmouk refugee camp to the heart of London. 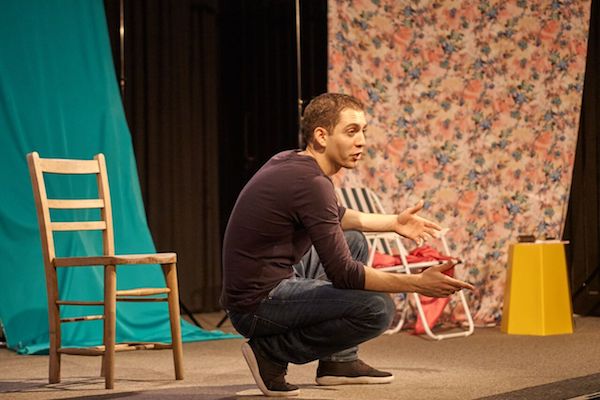 A 12-year old boy escaping from Yarmouk refugee camp in Damascus is left alone to sort out the quirks of his biology in an overcrowded raft headed for Europe. A vain yet independent girl struggles with her father’s rules and her first taste of sexual love. A shallow 20-year-old taxi driver is desperate to get laid despite the watchful eye of Hamas. And a vibrant actor living in Haifa yearns for his dream role where he doesn’t get shot.

These stories of passion, hope, longing, and crushing injustices are given the spotlight in Camouflage, a new one-man play written by director and academic Ahmed Masoud, and starring British-Egyptian actor James El-Sharawy. The show ran for one night only in Amnesty International’s London headquarters to mark both the 69th anniversary of the Nakba and 50 years since the occupation began.

Standing against one of the simple panel backdrops, with a handful of props and few sound effects, it is El-Sharawy’s physicality and the fluctuations of his voice that carry the action forward. Flipping his accents, pitch, and movements for each character, El-Sharawy plays not only the role of storyteller, but also a number of other characters within the story itself. As 17-year-old Nibal, he adopts flirty feminine gestures but must also communicate her terror when he embodies an Israeli soldier that taunts her with cigarette smoke. He is the taxi driver Zeid, as well as an intimidating Hamas officer, an alluring widow on a date, and a rather lonely grandmother.

The stories are separate from each other, not only spatially but in their content. What connects them is their characters’ struggle to live their awkward youthful experiences in spite of war. El-Sharawy brings them all together in a dramatic pantomime at the end where the movements from one story give way to those of another, each character acting out their own version of camouflage: Thaer and his friend as scarecrows running to the border, Nibal and her bikini lounging by her pool trying to forget the occupation outside her home, Zeid and his desperate attempts to look cool on Tinder, and Sami sneaking into an Israeli nightclub before his Palestinian dance moves give him away. 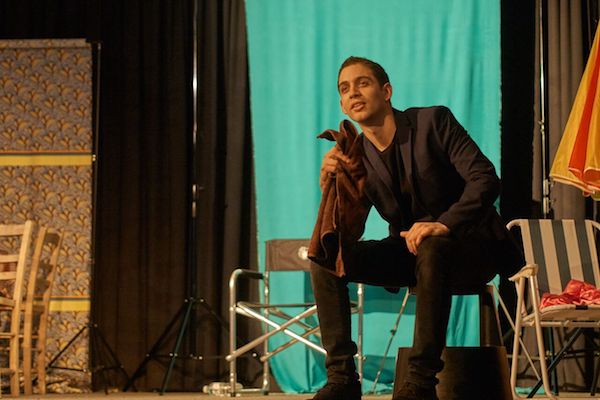 “The play is very much dependent on storytelling,” says Masoud, who was born in Gaza, came to the UK to study English literature, and has become active in a number of performing arts. “Taking the audience onto an imaginative journey so they could picture what it could be like to be a 12-year-old boy escaping war while still going through puberty problems, or a girl falling in love for the first time. It’s bringing the Arabic tradition of the hakawati into a dramatic style.” (In Arab culture, the hakwati is the storyteller. The hikaya, or tale, is an oral tradition of relation true events in a fictional format with memorable and arresting flair.)

Masoud’s stories are not just an exercise in empathy, but a brutally honest look at classism, sexism, and hypocrisy within Palestinian society. The teenagers aren’t merely frustrated by the occupation, but also by the prejudices of their elders. Nibal desires her independence and is furious that her widower father tries so hard to secure a husband to “take care of her” when he is gone. Even worse is the mother of one of her suitors, who drops her own husband’s high position in Mahmoud Abbas’ cabinet into their conversation as though Nibal and her father should be groveling at their feet.

Zeid, meanwhile, cannot stand the tight restrictions on social interactions put in place by the Hamas authorities and rails against their conservatism. Ironically, Zeid is also a carrier for the prejudices of his elders, mimicking his father’s classist disgust for refugees from other villages in Gaza.

That these youth both rebel against some oppressive social norms and continue with others makes them just like most other teenagers. Even among audiences sympathetic to Palestinians, this portrayal might seem a bit shocking, especially for Western audiences, who commonly encounter a relatively uncomplicated, sanitized story of Palestinians — one where they are not individuals but rather avatars of suffering. As if one needs to be a blameless saint in order to recognize suffering as legitimate and in need of redress.

Camouflage succeeds as a play on a number of levels: as social critique, as part of Arab tradition, as comedy and tragedy, and as art that values individual stories and not commodities of pity. What’s next for the production is still to be determined, but the activist community would do well to take notice. Dark comedy is just as good a genre as documentary when it comes to human rights storytelling.

Christa Blackmon is a media anthropologist living in London. Her work explores the intersection of art and human rights. In 2016, her Masters dissertation on oral histories of the Nakba online received a Distinction from the School of Oriental and African Studies.