As if the Rabbis’ edict against renting homes to Arabs wasn’t enough, a new letter, made public yesterday, has some 30 well-known wives of Orthodox Rabbis warning Jewish girls against dating Arabs or even working with them.

The letter stated that “there are quite a few Arab workers who use Hebrew names. Yusuf becomes Yossi, Samir becomes Sami and Abed becomes Ami. They seek your proximity, try to appeal to you and give you all the attention you could ask for, they actually know how be polite and act making you believe they really care…but their behavior is only temporary.

“As soon as they have in you in their grasp, in their village, under their complete control – everything becomes different. Your life will never be the same, and the attention you sought will be replaced with curses, physical abuse and humiliation.”

The letter further stated, “Your grandmothers never dreamed that one of their decedents would, by one act, remove future generations from the Jewish people. For you, for future generations, and so that you will never have to endure the terrible suffering, we appeal to you, begging, pleading, praying: Don’t date them, don’t work where they work and don’t perform National Service with them.”

One of the names on the letter is that of Nitzhia Yosef, the wife of Rabbi Yaakov Yosef and daughter-in-law of Shas’ spiritual leader Rabbi Ovadia Yosef.

The notion that Arabs change their names in order to seduce Jewish girls is not new. It was a common talking point by the late Rabbi Meir Kahane, the ultra-right leader and founder of JDL who was kicked out of the Knesset for his racist platform. At the time, Supreme Court Justice Meir Shamgar wrote that the actions of Kahane remind us “the worst persecutions in Jewish history” (as Ariana Melamed noted, Hitler made similar accusations in chapter 11 of Mein Kampf: “With satanic joy in his face, the black-haired Jewish youth lurks in wait for the unsuspecting girl whom he defiles with his blood, thus stealing her from her people.”)

Rabbi Kahane was expelled for public life back in the eighties, and Israel today is a very different place. A recent poll by the Harry S. Truman institute in the Hebrew university had 44 percent of the Jewish population in Israel supporting the Rabbis letter that forbid renting homes to Arabs (the wives’ letter was published after the poll was conducted). As I reported last year, the municipality of Petah Tirva, a Tel Aviv suburb, even formed a special unit that would “locate and help girls that date Arabs.”

Last year, residents of a Jewish neighborhood found the following flyer in their mailbox. It reads: “This Arab, which works at the Zil Ve-Zol grocery store in Romema [Jerusalem] is dangerous for the daughters of Israel, he violates Jewish girls!!!” 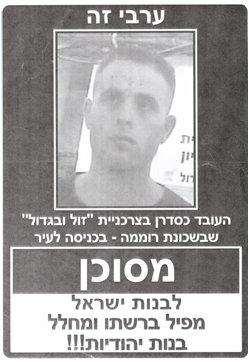 At the time, some people have seen this as an isolated incident. Today, it’s clear that racism against the Arab minority became a political norm.

As Yossi Gurvitz wrote, many in the Israeli leadership, including PM Netanyahu himself, made their political fortune on incitement and hate-talk. It’s very unlikely that they will take action against the Rabbis’ wives, just as they didn’t take action against their husbands – most of them civil servants, making their living of taxpayer money. The grim news is that Israel doesn’t have a leader that would send the National Guard to Little Rock or the FBI to Mississippi. Instead, we have our KKK high priests serving at our synagogues, and our George Wallaces at the Knesset. 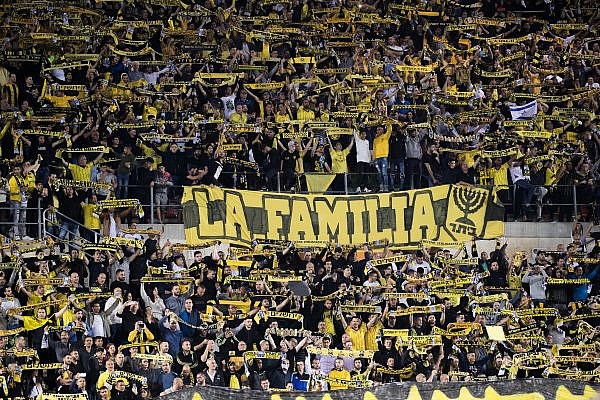