Crowd control measures have killed 10 protesters since 2005. Meet ‘the skunk,’ the tear gas canister and the rubber-coated bullet – just some of the measures the IDF uses against civilian Palestinian protesters in the West Bank. 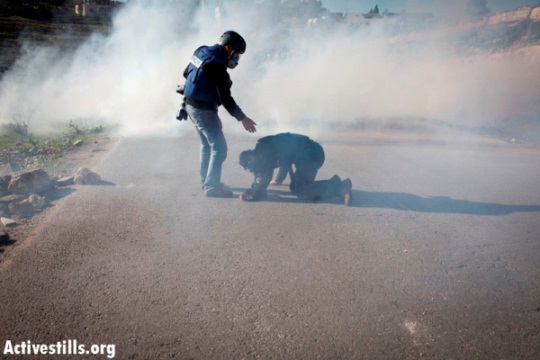 A press photographer helps his colleague which was hit from a tear gas canister shot by Israeli soldiers, during a protest against the occupation in the West Bank village of Nabi Saleh, December 23, 2011 (Photo by: Oren Ziv/ Activestills.org)

At least ten Palestinians have been killed by crowd control measures used by the IDF since 2005; 46 more were shot to death using live ammunition. These numbers, published by Israeli human rights organization B’Tselem, refer only to civilian protesters and not to people killed during IDF military operations or to Palestinians who were shot to death at checkpoints or near security fences.

Palestinians have engaged in unarmed protest against the Israeli occupation for decades. Acts of protest include sit downs, marches, rallies, roadblocks and more. Some protests include large-scale stone-throwing at soldiers. Israel considers all forms of protest against the occupation illegal (the West Bank is under military law, which puts many limits on political organization, mobilization and protest), and the army has developed various weapons systems that are designed to stop or disperse demonstrations without killing many protesters.

However, there are ways to use these weapons which can make them lethal. For example, shooting tear gas canisters directly at protesters could result in death – at least two cases of this sort happened in recent years, in the villages of Bil’in and in Nabi Saleh. For years, a widespread practice in IDF units was to reduce the number of rubber-coated bullets in the packs, resulting a higher-velocity lethal weapon. At least six Palestinians died from rubber-coated metal bullet wounds in recent years. 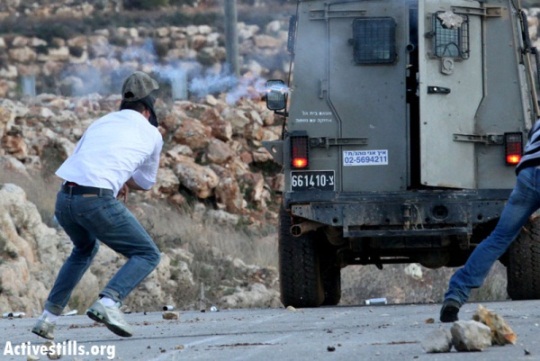 Mustafa Tamimi, a 28 year-old Palestinian from Nabi Saleh seen just before he gets hit with a tear gas canister shot by an Israeli soldier from a short distance during the weekly demonstration in the West Bank village of Nabi Saleh, 09.12.2011. Tamimi later died from his wounds (Photo Haim Scwarczenberg)

It should be noted that crowd-control measures are used to end protests even in cases when stones are not thrown or when no soldier is at any risk of physical harm from the protest.

The following video shows examples of the common practice of shooting tear gas canisters directly at protesters in the village of Nabi Saleh.

The report by B’Tselem lists all the known measures used by the IDF against civilian protesters, along with the relevant army orders regarding their use. As the report details, most of those weapons are not used in protests by Jews, regardless of the location or the nature of the protest. Some of the measures are only used in the West Bank.

The most common weapons in recent years are:

Tear gas is a chemical irritant that severely affects the eyes and the respiratory system. It is the predominant crowd control weapon in use by Israeli security forces and is dispersed through several types of grenades manufactured in the United States. The grenades can be hand thrown, fired from launchers or from jeep-mounted launching systems.

Stun grenades are the second-most predominant crowd control weapon after tear gas. They are a diversionary measure, whose explosion emits a bright light and a thunderous noise. The grenades are designed to cause fear and panic, thereby enabling security forces to overpower people. Like the tear-gas grenades in use by Israeli security forces, the stun grenades are also manufactured in the United States. 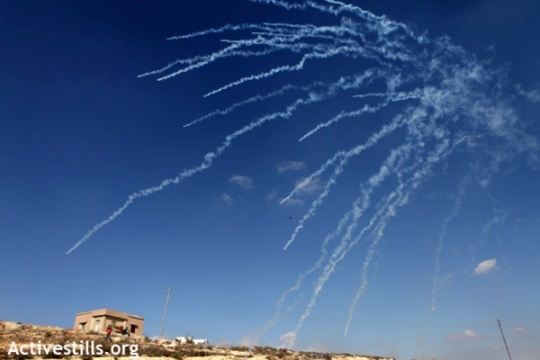 At least a dozen of tear gas canisters shot at protesters simultaneously in the village of Nabi Saleh, 07.10.2011 (Photo by:Anne Paq/Activestills)

Rubber-coated metal bullets are utilized primarily against stone-throwers. Security forces use two types of bullets made of a metal core coated with either rubber or plastic, and fired from launchers mounted on rifle barrels. These so-called “rubber” bullets are manufactured by Israel Military Industries Ltd. The Orr Commission prohibited the use of rubber-coated metal bullets within Israel’s borders. In East Jerusalem, since the prohibition, Israel Police has been using 40mm-caliber sponge rounds imported from the United States.

The Skunk is a foul-smelling liquid developed by the Israel Police for the purpose of dispersing demonstrations. It is sprayed from truck-mounted water cannons. The odor is so offensive that it forces any person in its vicinity to back off.