The judge who oversaw New York City’s stop and frisk case for nearly a decade responds to the shooting of an unarmed black man in northern Israel. Police arrest a demonstrator taking part a protest attended by thousands of Israeli-Ethiopians against police violence and racism, Tel Aviv. May 3, 2015. (Ben Kelmer/Flash90)

I have been reading, with a troubling sense of déjà vu, about the police shooting of Solomon Tekah, an unarmed Ethiopian-Israeli man, in Haifa last week. As the judge who oversaw the “stop and frisk” case in New York City for nearly a decade, I am all too familiar with police racial profiling and the harm it causes to the police force, the victims of police violence, and the community at large.

Those harms are not any different based on the location in which they occur. They are just as devastating in Israel as they are in the United States, where black and brown people are the most vulnerable populations.

In New York, the mayor and police commissioner decided back in the late 1990s that the increased use of stop and frisk would reduce crime. Between 2004 and 2012 the NYPD conducted more than 4.4 million such stops. The federal class action lawsuits challenging the stop and frisk practices of the NYPD hinged on the claim that police were using racial profiling in deciding who to stop — rather than any objective basis for a stop, such as reasonable suspicion that a crime was being committed or about to be committed.

During the years that the lawsuits were pending, experts were hired by both the plaintiffs and the City of New York. The plaintiffs’ expert analyzed thousands of stops; here is a quick summary of his key findings:

What these statistics showed, as borne out by testimony at trial in the well-known case of Floyd v. City of New York, at which I presided, is that blacks were stopped without any real basis other than their race. Most of the stops were “dry” and the practice did nothing to reduce crime. Indeed, after I ruled in 2013 that the stop and frisk program was unconstitutional as practiced by the NYPD, stops dropped to a low of 20-30,000 per year with no resulting increase in crime. In fact there was a decrease in many categories of criminal activities.

But the real story, and the reason I am writing in response to the news from Israel, is the harm that the practice caused to the entire community, including the outrage expressed by protestors for days following the shooting of an unarmed black man.

First, many of the stops escalated and resulted in the completely unnecessary and tragic death of the victim. This often happens when the police are instinctively suspicious of the person with whom they interact because of racial stereotyping — which appears to be the case of the off duty police officer who killed Solomon Tekah.

Second, the community at large distrusted the police and would not cooperate in any investigation — as witnesses and at times even as victims.

Third, resentment by the black and Hispanic communities toward the police only served to endanger the police and resulted in violent protests and confrontations, as we saw in Israel last week. 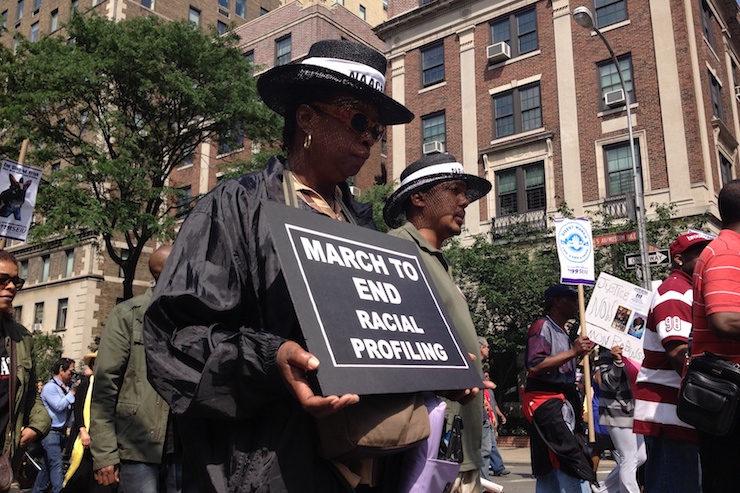 Demonstrators in New York City take part in a march against racial profiling, June 17, 2012. (longislandwins/CC BY 2.0)

Racial profiling as a basis for policing is bad policy and bad practice. It does not make the community safer and endangers both the police and the victims. After I declared the policy unconstitutional I ordered a series of reforms that have had a dramatic effect on reducing tensions between the police and the populations they protect. Among those reforms has been training of the police as to when it is legitimate to use force in a confrontation, the use of de-escalation techniques rather than force, when a stop (and frisk) is justified, and when a person stopped has a right to refuse to respond to police questioning.

Another major reform was to require the police to begin wearing body cameras in order to record their interactions with the people they confront on the streets, in cars, or in and around housing projects. The police are now required to make a written record of their stops and to explain in narrative form the basis for them. Supervisors are required to review these forms and weed out “bad apples” or “over-stoppers” who repeatedly violate the rules by reverting to the unlawful use of racial profiling.

I write this in the hopes that it might provide some much needed guidance to the current unacceptable situation in Israel where it seems that some Israelis are far less safe than others because of the color of their skin. This problem can be solved when the police and the people they purport to protect are willing to meet with each other and devise a better way to provide both protection to the community and the safety of all its residents – white, black, or brown.

Shira Scheindlin served as a United States District Judge in the Southern District of New York from 1994 to 2016. She was appointed to the bench by President Bill Clinton. She is now serving as an arbitrator and mediator.