A truly rebuilt Jerusalem is a place where freedom and justice can flourish, a place where Jews and Palestinians can live alongside one another without checkpoints and walls, without the fears and realities of a hyper-militarized society, a place devoid of settlements and separation. 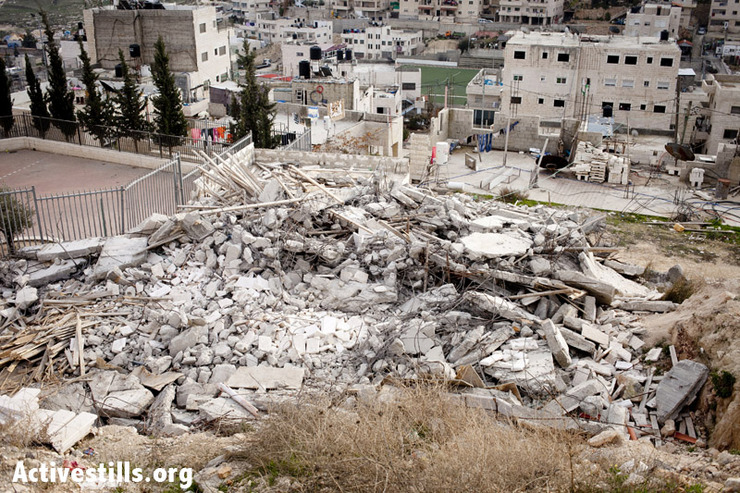 The Demolished house of Rafat brother of hunger striker Samer Issawi, seen on January 4, 2013. The house was demolished a few days ago by the Israeli authorities, without a demolition order. Samer Issawi is now in poor health condition held in the prisoners medical center, after being on hunger strike for 161 days. (Photo by: Shiraz Grinbaum/Activestills.org)

Every spring Jews around the world gather around a seder table to commemorate the Jewish exodus from Egypt. At the conclusion of the Passover seder we utter the eternally hopeful words, “Next year in Jerusalem.” Through two thousand years of exile, Jewish people longed to return to Eretz Tzion, Yerushalayim – to Zion, the city of Jerusalem.  Once Jews returned to Jerusalem in massive numbers in the late eighteenth and early nineteenth centuries, people living in the sacred city concluded their seder by saying, “Next year in the rebuilt Jerusalem,” meaning next year in Jerusalem with the Temple rebuilt. Still today, seders in Israel end with this powerful phrase.

In addition to a strong emphasis on Jerusalem, another central notion in Judaism is justice. There is no Jewish ritual that better evidences the centrality of justice for the Jewish people than the Passover seder. The seder brings into relief the memory and experience that we were once slaves in the land of Egypt. Our imperative to work towards justice emerges during the seder when we say, “let all who are hungry come and eat” and when we sing avadim hayinu and remember that we were once slaves. It is precisely because we were slaves that we are responsible to ensure that never again does any individual or group experience slavery, persecution, exile, or injustice—especially at the hands of Jewish people.

The Jewish imperative for justice heightens the urgency in our quest for a more just world today. This urgency is particularly vital for those working for social change in Israel and Palestine because the actions of a Jewish state, its military, and the financial supporters of occupation policy are afflicting the Palestinian people. I witness this affliction daily as I conduct dissertation research in a Palestinian neighborhood in East Jerusalem whose access to the rest of city has been cut off by the separation barrier. Residents of the neighborhood do not have regular or easy access to work, school, health care facilities, and even their cemetery, which are located in Jerusalem. The lack of access to crucial resources has profoundly negative impacts on the neighborhood’s economy and the residents’ ability to support themselves. Worse still, families living on opposite sides of the separation barrier are separated from each other and are unable to see each other, even on holidays or special occasions. Some cases are so extreme that a father is prevented from attending the wedding of his daughter. Though it is challenging, I am compelled towards this research and work with Palestinian communities in Jerusalem specifically due to my identity as a Jew whose Judaism is shaped by the Passover imperative to work towards justice.

As a Jew committed to hearing the call of the seder, I refuse to forget our people’s history of slavery, of genocide, and of intense oppression through years of virulent anti-Semitism. However, our history does not entitle us to subject others to the suffering our people once experienced—the suffering of exile, persecution, and dispossession. In fact, just the opposite is true. Especially as Jews, it is our responsibility to participate in the struggles of the Palestinian people, to build alliances with Palestinian communities, and to respond to the structural and institutional social inequalities against Palestinians that are perpetrated by Israel in the name of the Jewish people. We must speak and act out against occupation, settler colonialism, and the policies of exclusion, segregation, and ethnic discrimination that are widespread, routine, and normalized in Israel and Palestine today.

It is in vogue today to speak about contemporary issues of (in)justice around the seder table. LGBTQI rights, gender and sexual violence, African asylum seekers and immigration reform, food justice, economic justice, and revolutions in the Arab world will prove to be hot topics at seder tables worldwide. This year, I urge you to include conversations about Jerusalem to this list of social justice issues mentioned at your seder. With the privilege of being able to live in the city of Jerusalem comes responsibility.  This year’s seder is an opportune time to reflect on that responsibility. While Jews in Jerusalem enjoy tremendous freedoms, privileges, and protection under the law, Palestinians living in Jerusalem are subjected to injustices including house demolitions and forced evictions from their homes by religious Jewish settlers. Let us not forget that Jerusalem is a shared city, a city whose vision of sanctity and peace can and should inspire the forging of alliances that work towards justice and liberation. It should not be taboo to talk about Israel and Palestine at today’s seder or at any other Jewish ritual or event in the Jewish community worldwide. Whereas in other aspects of Jewish life it appears to be taboo to speak about Israel in any critical way, this year’s seder table must be a place where issues of occupation, discrimination, and exclusion in Jerusalem and in Israel and Palestine are discussed freely and critically.

I come from a family of highly committed Jewish educators and rabbis and at our Passover seder each year we discuss the importance of freedom and justice and their centrality in the story of the Jewish people. The seder is a ritual that foregrounds the act of asking questions and we should participate in and encourage this important aspect of the seder. This year, ask the people around your seder table what Jerusalem means to them – reflect on what it means to you and what it might mean for others. What does Jerusalem symbolize? Who is permitted to go to Jerusalem—for work or school or to visit with family—and who is forbidden from entering the city?  This year when you end your seder, think about what it means to say, “Next year in Jerusalem.” What would it mean to truly “rebuild” Jerusalem?  How can true freedom, justice, and liberation be achieved?

In recent years I have found it increasingly difficult to utter the words “next year in Jerusalem” at the Passover seder, words which to me once seemed both so benign and exciting. But this year I understand these words to be more important than ever. We must all say what Jews in Jerusalem have long been saying: “next year in the rebuilt Jerusalem.” For me this does not mean that we must rebuild the foundations and walls of the ancient Temple, but rather that we must work to build a Jerusalem that is devoid of walls, checkpoints, and settlement enclaves and we must strive for an inclusive Jerusalem that is free of the systematic exclusion of the Palestinian population from the city. Rebuilding Jerusalem with a vision towards inclusion and justice rather than exclusion and oppression is how I interpret the meaning of the seder’s concluding words.

A truly rebuilt Jerusalem is a place where freedom and justice can flourish, a place where Jews and Palestinians can live alongside one another without checkpoints and walls, without the fears and realities of a hyper-militarized society, a place devoid of settlements and separation. This year, Palestinians are strangers in their own land. Next year may they know the freedom the Jews experienced after their exodus from slavery.

This year it is our responsibility to work towards justice so that next year we may know a Jerusalem that is rebuilt on the foundation of justice that the Jewish tradition obliges. L’shana habaa b’yerushaliyim habnuyah – next year in the rebuilt Jerusalem!

Oren Kroll-Zeldin is a PhD Candidate in Cultural Anthropology at the California Institute of Integral Studies in San Francisco. He is currently living in Jerusalem to research the effects of the separation barrier on Sheikh Sa’ad, a Palestinian neighborhood of East Jerusalem.