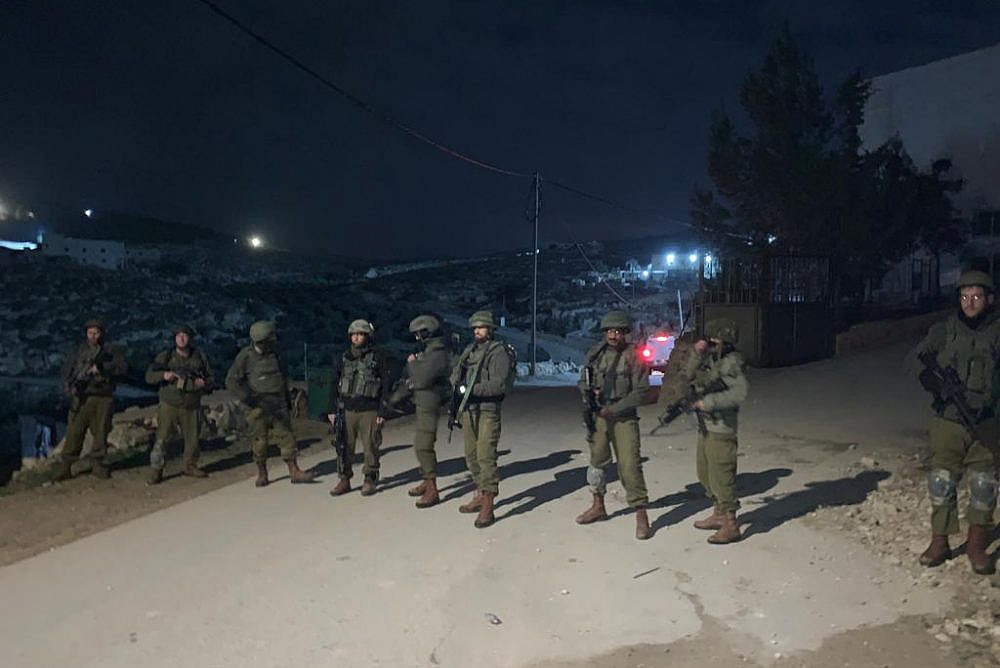 Israeli soldiers seen during a raid on the Palestinian village of A-Tuwani in the South Hebron Hills. (Basil al-Adraa)

It’s 2 a.m. on March 17th, and Israeli soldiers have invaded my village again in the occupied West Bank. They’re in a jeep, tossing stun grenades toward houses while all the residents are asleep. They throw one under someone’s front window, then drive a short distance and throw another at the next house. I watch them do this four times. There is no apparent reason for the soldiers to be throwing the grenades; there were no riots or clashes that preceded their entry. But the grenades explode and awaken the whole village — including my eight-year-old sister Tasnim, who wakes up terrified.

Since February, Israeli soldiers have invaded our village — a-Tuwani, in the South Hebron Hills — almost every week. The pattern is always the same: the soldiers roam the streets with no apparent purpose other than to intimidate the residents. It seems like they’re doing training exercises.

Tasnim has not been able to sleep at night for two months now, ever since the incursions began. She asks our mother to stay in her room every night and talk to her. Many other kids in the village are experiencing the same fear. When we asked the army last month to explain the invasions, we were told these were just “routine operations.” Well, this is what their routine looks like.

The recent wave of invasions began on Feb. 1, when a dozen soldiers entered the village on foot. They went from house to house, not arresting anyone or even entering any properties, just shining powerful flashlights into the windows of sleeping families. My mother woke up and saw a soldier standing on our porch, shining his torch at her. Another woman said soldiers switched off her porch light. After about twenty minutes of this, they filed into the village school and patrolled the empty classrooms for a bit. Eventually, they went back up to Havat Ma’on — an illegal outpost built on our village’s land — where they had parked their jeeps. The army spokesperson would not explain why any of this took place.

hope your sleeping well, IOF invaded our homes detained my dad for an hour, shooting stun grenades, train inside and between our homes, blocking the all the roads. pic.twitter.com/2pJNWz6mJh

A couple of weeks later, on the night of Feb. 15, soldiers appeared again. This time they arrested two residents, who they interrogated about an alleged attack on a settler. (The two were released the next day.) The soldiers had stopped next to my neighbor’s house. I went downstairs to film what was going on, together with Itay and Yasmin, two Israeli activists who were staying in the village. The soldiers were angry at us for filming, and barked at us that we couldn’t film operational activity. They spoke Hebrew to Itay, and then two soldiers grabbed him and shoved him to the floor. One soldier placed his knee on Itay’s neck.

After a few minutes I couldn’t stand it any longer, so I pulled out my phone and took a picture. A soldier punched me, shoved me, and tried taking my phone away. I was telling them that I was a journalist when another group of soldiers appeared from among the trees, and shone a red laser light at me. I ran away.

The soldiers, meanwhile, took Itay’s camera and drove off. The army spokesperson said the next day that this was a mistake and the camera would be returned right away. In reality, it took Itay over a month and two trips to the police station in the settlement of Kiryat Arba to get his camera back.

Some three weeks ago, on March 10, the soldiers invaded the village again. They ordered everyone who was outdoors to get inside, before throwing stun grenades into the street. People who stayed outdoors were pushed to the floor and detained, while the soldiers threatened and swore at anyone who filmed them. No one was arrested, and, as before, the army would not explain why it was necessary for the soldiers to invade the village in the middle of the night.

On March 17, as mentioned, soldiers entered yet again, searching one home and throwing stun grenades seemingly at random. And finally, on the night of March 21, an even larger number of soldiers than usual appeared in the village, entering from three different directions. They barged into one house and demanded to know the whereabouts of the family’s 16-year-old son, who wasn’t at home.

In the street outside, soldiers aimed their guns at whoever stepped out to see what was going on, yelling at them to get back inside. My father insisted on staying outside to monitor what they were doing. The soldiers marched him to a street corner, blindfolded him, and confiscated his phone. When he asked for water, they gagged him so that he couldn’t speak anymore. All this took place right in front of my mother and my aunts.

When I was Tasnim’s age, 20 years ago, I developed the habit of always sleeping with my shoes on. Soldiers would barge into our homes at night screaming at us to get out, before gathering all the residents — adults and children alike — on the lot. They never gave me time to put my shoes on, so I learned to sleep without taking them off.

Today, the army won’t explain why soldiers keep appearing in our village, but back then we knew night incursions were a form of revenge. During the day we’d go to our agricultural lands, which settlers were trying to take over, and help the shepherds. Jewish and international solidarity activists would often come along too. In the fields, soldiers would yell at us to stop what we were doing, and especially to stop working with solidarity activists. At the time, as a kid, I didn’t really understand what was going on. Much like my little sister, I only knew that I was scared. Now, I know that this is what a military occupation looks like.