With double the usual police presence, the anti-Arab slogans usually heard during Jerusalem Day were quickly silenced. But the racism wasn’t so swiftly scrubbed out.

By Oren Ziv and Orly Noy 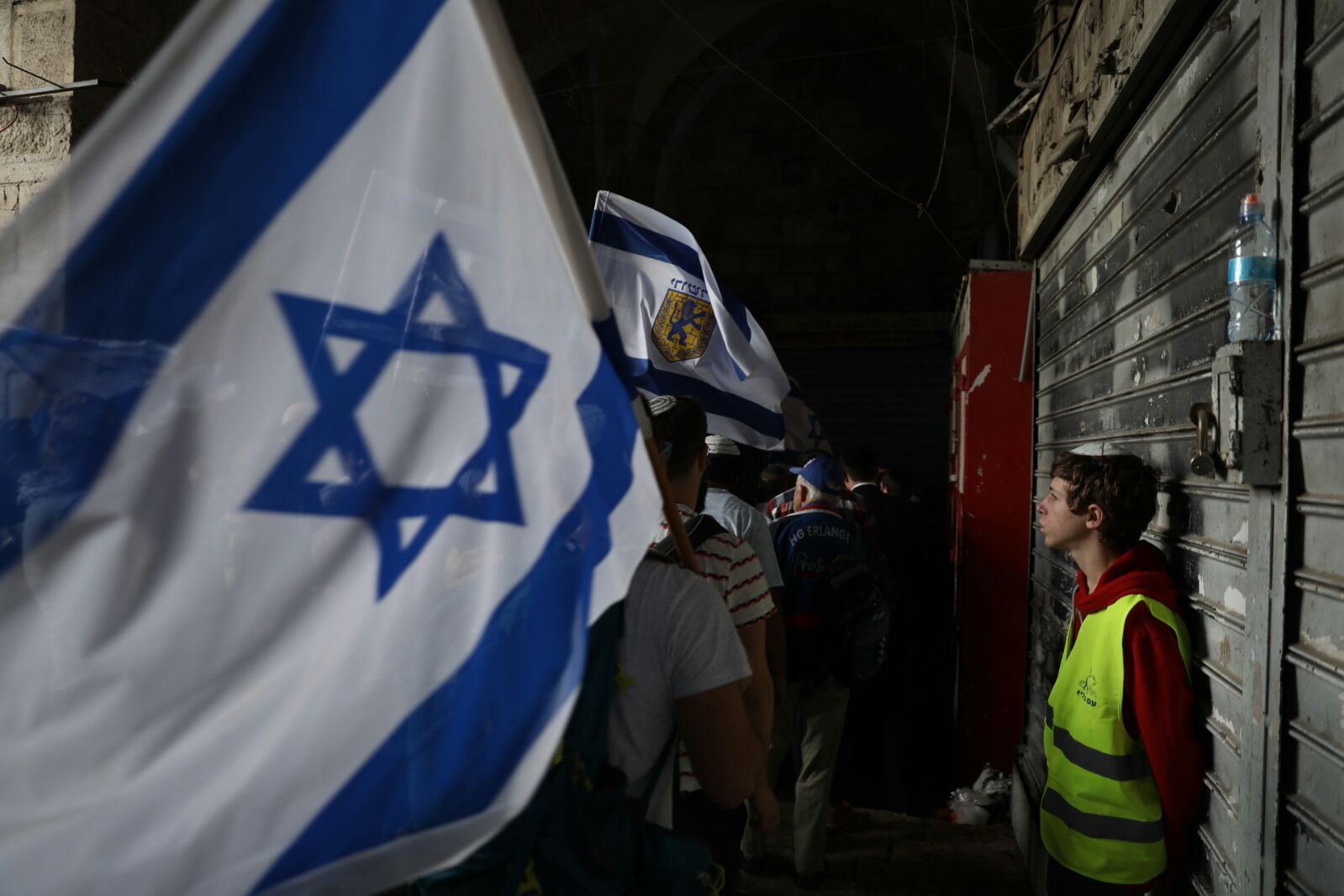 Israeli nationalists march through the Muslim Quarter of Jerusalem’s Old City during the ‘March of the Flags,’ part of the annual Jerusalem Day celebrations, May 13, 2018. (Oren Ziv/Activestills.org)

A day before Israel was set to celebrate the U.S. Embassy’s move to Jerusalem, the annual “March of the Flags,” in which thousands of nationalist Israelis pass through the Old City waving flags and chanting racist slogans against Arabs, threatened to paint Jerusalem as violent and conflict-ridden. This is likely the reason the police made sure that this year, the march would be relatively quiet, without major clashes. In fact, the racism was quickly silenced, and the number of police officers was double the usual size.

And yet, racism was present in every street corner. In the frightened looks of Palestinians, in the closed-up shops, in ensuring that Palestinians were removed from the route of the march.

When the first groups of marchers headed into the Muslim Quarter of the Old City through Damascus Gate, they sang “Am Israel Chai” (“The nation of Israel lives”). When a group of teenagers began chanting racist slogans, the police immediately put an end to it.

At this point, nearly all the stores along the route of the march were closed. Palestinian residents of the Old City hurried home, some of them still holding the flowers handed out as a gesture by left-wing activists. Not all the residents were happy with the flowers; the owner of a nearby juice stand flat-out rejected the gesture. “I want peace,” the activist told him. “You want peace?” he responded, “then first tell your government to leave Al-Aqsa alone.”

Khaled Tufah, the owner of a souvenir shop on Al-Wad Street, where the march was set to take place, explained why he was closing up. “No one buys from us during the march, and even if someone does come, his friends will say: ‘He’s Arab, don’t buy from him.’”

“I don’t care about Trump or anyone else,” Tufah continues. “A few months ago the Palestinian people showed its strength in the face of the metal detectors at Al-Aqsa, and in the end we removed them. The embassy is an issue for politicians, our power is in the streets.” 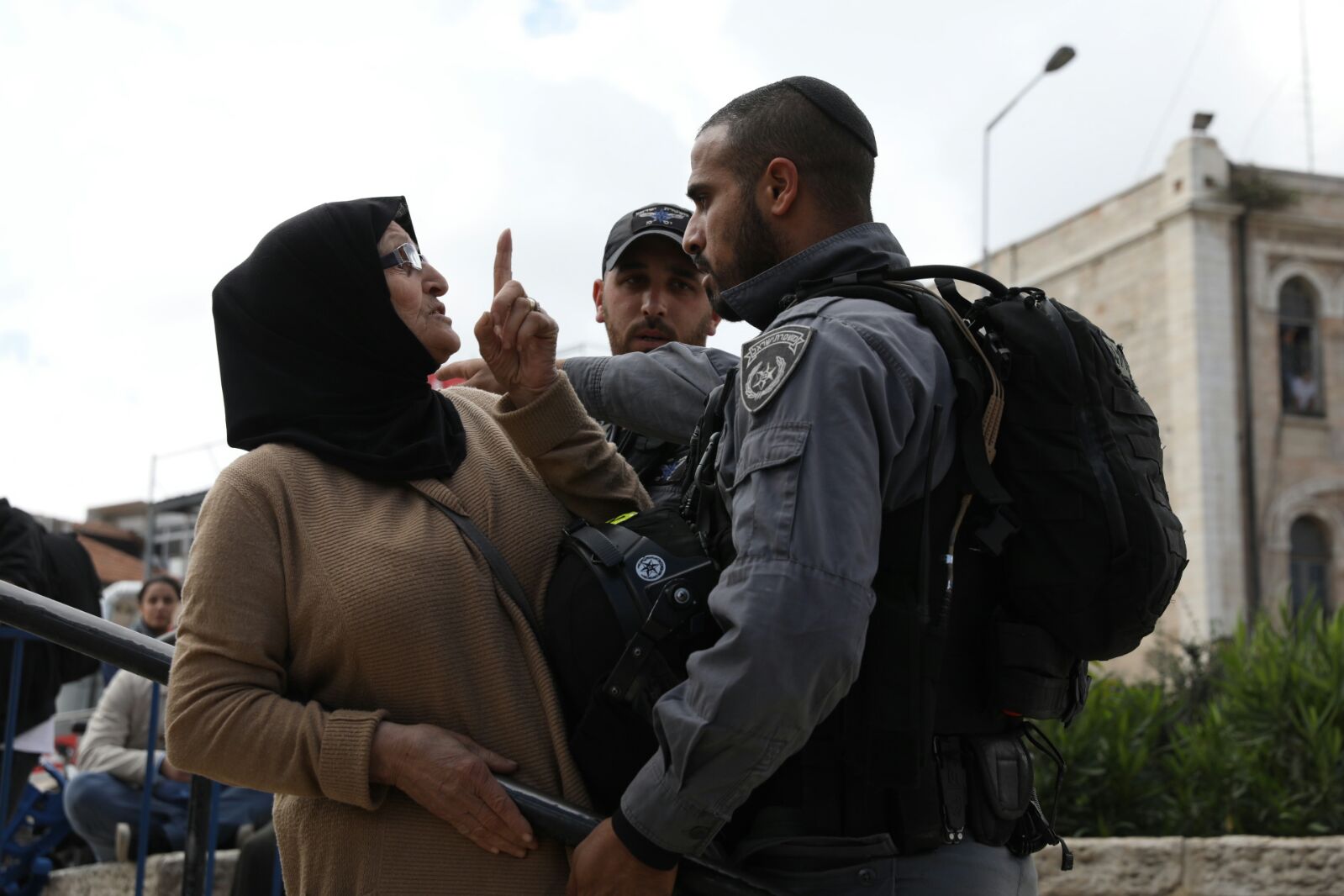 A Palestinian woman argues with an Israeli Border Police officer during Jerusalem Day celebrations near the Old City, May 13, 2018. (Oren Ziv/Activestills.org)

Muhammad Omar, a young Palestinian Jerusalemite, added: “Jerusalem is holy to all religions. Trump’s decision means he recognizes only the Jews, and unfortunately this move will bring about more violence and death.”

Despite the fact that the main event of the day was a march through the Muslim Quarter, thousands celebrated in white shirts and and Israeli flags across the city. Army Radio broadcasted live from the city center, and religious girls who did not take part in the March of the Flags through the Muslim Quarter filled the streets and danced to the sounds of live music set up by the municipality. 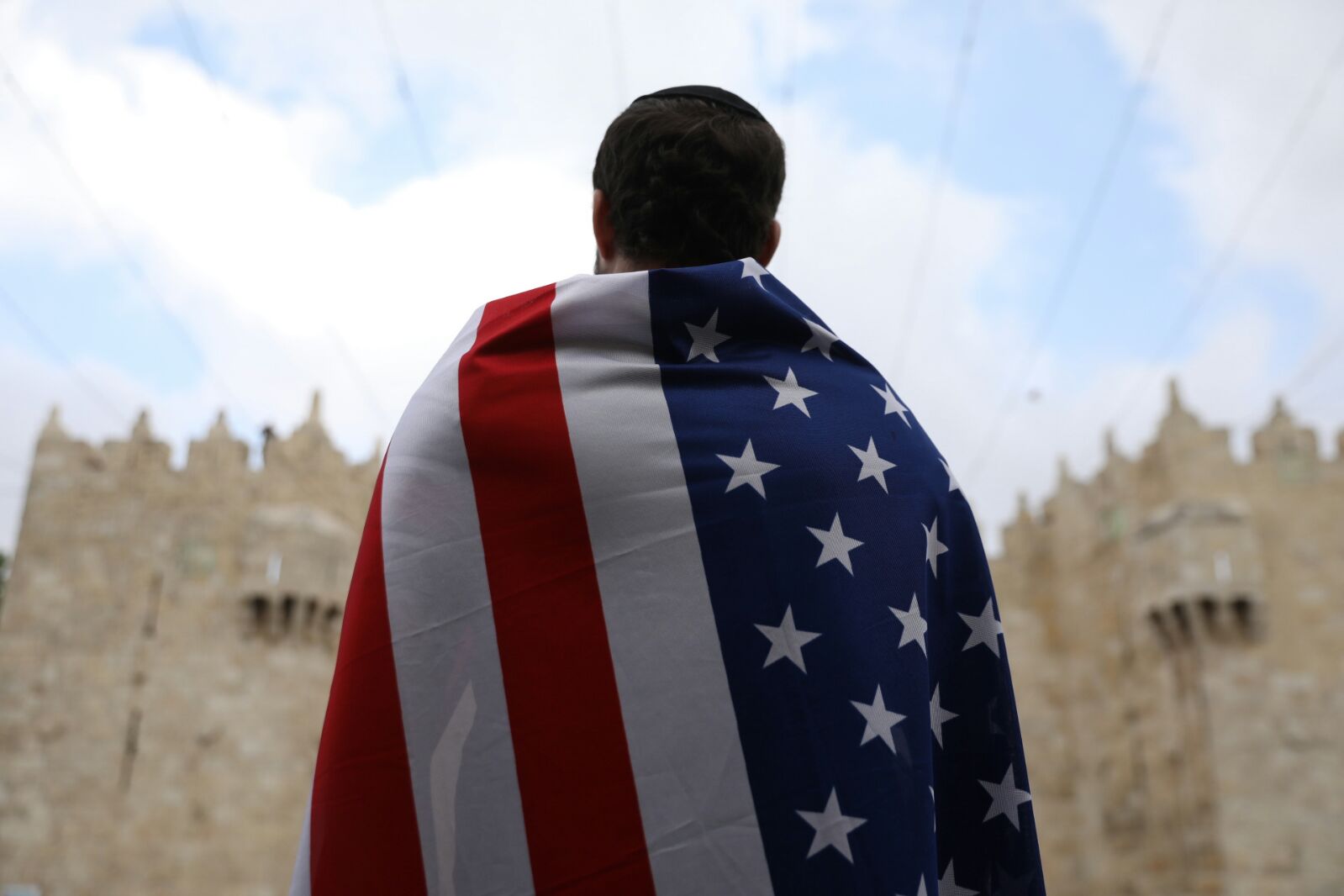 A man draped in an American flag stands in front of Damascus Gate during the annual ‘March of the Flags,’ as part of Jerusalem Day, May 13, 2018. (Oren Ziv/Activestills.org)

Among the Israeli flags were flags belonging to Lehava, the right-wing anti-miscegenation group, mostly by younger marchers, many of whom wore “Kahane was right” stickers on their shirts. There was also a group of young Ethiopians who came to the march to raise awareness for Avera Mengistu, an Ethiopian-Israeli who crossed over into Gaza in 2014 and has been unheard of since. Earlier, they visited the protest tent set up by Mengistu’s family, across from the prime minister’s residence.

A group of left-wing activists from “Antifa Jerusalem” hung a giant sign on the route to Damascus Gate, reading “Jerusalem against nationalism,” leading to the detention of six activists.

It turns out that talking about nationalism during the city’s so-called holiday is too much for the public to handle. Lehava’s flags and stands, however, remained standing.

This article was first published in Hebrew by Local Call. Read it here.