Some in Israel are drawing parallels between the Catalonian demand for national self-determination and Palestinian independence. The two situations are nothing alike. 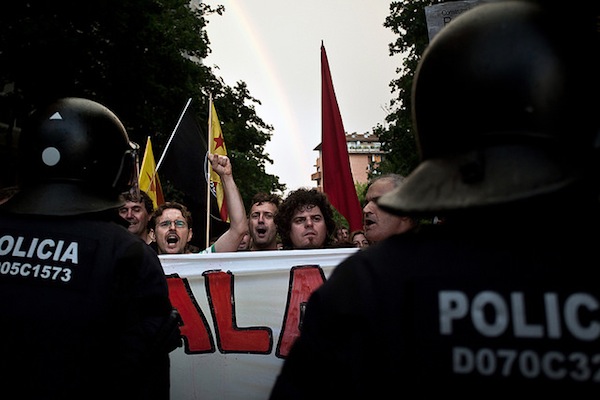 The referendum over Catalonian secession underway in Spain is turning into a serious political crisis, which threatens to become a European crisis that could dwarf even Brexit. The European Union has succeeded at tampering internal conflicts inside member states: the vision of European identity was critical in ending the violence in Northern Ireland, and perhaps even the struggle for Basque independence.

Now, a declaration of Catalonian independence would put to a test not only Spain, but the European Union itself: other member-states also have secession movements of their own, of varying significance. The basic instinct of the EU is, of course, to preserve the status quo but it is possible that is no longer an option. (On that note, I recommend reading the New York Review of Books’s survey of literature calling for a new European narrative or political framework.)

On the sidelines of the referendum in Spain, some in Israel are drawing parallels between the Catalonian demand for national self-determination and Palestinian demands. These wonder out loud how Spain and Europe could push Palestinian independence on Israel when they oppose the independence of minority groups within their own borders. The two situations are nothing alike, however.

Catalonians are already full citizens in Spain, like the Kurds in Iraq, Tibetans in China, and most of the minority groups in the world that are demanding independence. If we were to imagine a parallel situation in Israel, it would be if Palestinian citizens of Israel in the Galilee or the Negev were to demand independence. Alternatively, another comparable situation would be if following Israel annexing the Palestinian territories and giving citizenship to all of its residents, Palestinians within the resultant one-state solution were to hold a referendum on secession. That might not be the worst idea in the world.

Likewise, the “autonomy” that Israel has supposedly granted Palestinians does not at all resemble the idea of autonomy that is discussed in the rest of the world. Autonomy for certain regions or minority groups is supposed to supplement basic civil rights, not in place of them. The Israeli example is more akin to the demands in South Africa to recognize Bantustans as autonomous regions than to other ideas of autonomy.

Current examples that are closer to the Israeli case, at least as far as the status of the land and its population, are Northern Cyprus and Western Sahara. In those places, however, the population at stake is much smaller than the Palestinian population living under Israeli occupation — and in both places the occupying power (Turkey and Morocco) have attempted their own resolutions. It’s important to note that the world, including Israel, does not recognize those resolutions — not the “independence” of Northern Cyprus, and not the occupation of Western Sahara, and rightly so. As such, the world’s opposition to the Israeli occupation of the Palestinian territories is consistent with and follows the logic of the international system’s fundamental principles.