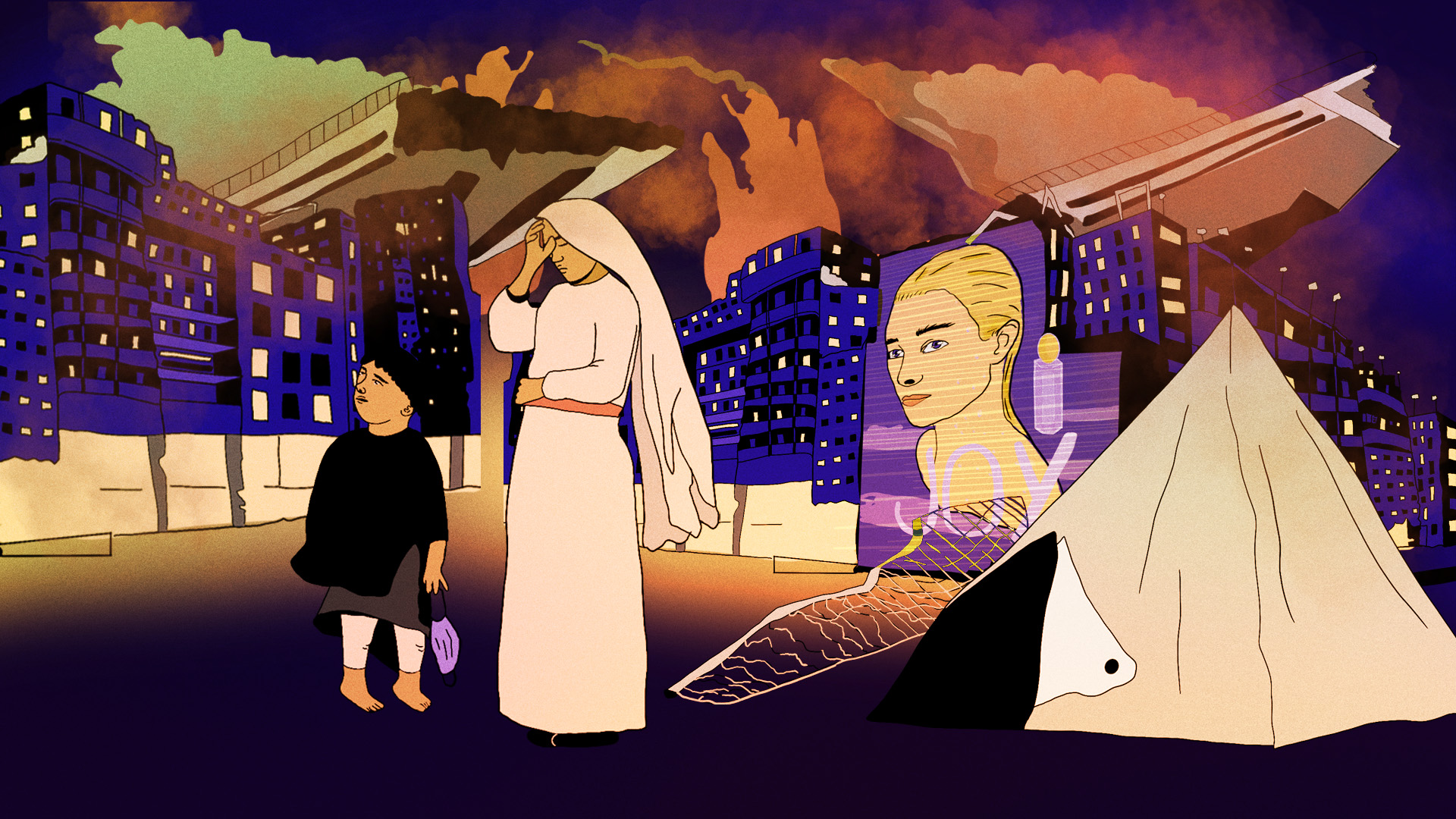 The following is an essay published as part of +972’s New Futures project. In this series, writers, thinkers, and activists share how they visualize Israel-Palestine the day after the pandemic, as a way of transforming this dystopian moment into an exercise in radical imagination of rethinking through the past, present, and future of this region, and envisioning a different reality for all those living between the river and the sea.

The first entry in the UN Relief and Works Agency’s online photographic archive shows a Palestinian woman, with her child, standing “next to their tent in a newly formed refugee camp.” The image is one of hundreds of thousands dating back to 1948, the year the majority of Palestine’s indigenous population became refugees. It depicts a bare, unnamed landscape, interrupted only by two human figures and the cone-shaped canvas that is their shelter. The scene, the photo’s title tells us, captures the “first phase” of the Palestinians’ dispossession.

That was 72 years ago. Now there are no phases left to count. For Palestinian refugees and their descendants, what began as makeshift shelters eventually evolved into a patchwork of nearly 60 “camps” spread throughout the West Bank and Gaza Strip as well as in neighboring Jordan, Lebanon, and Syria. Instead of canvas tents, these decades-old encampments are now made of concrete and corrugated steel, home to three generations of displaced families. Of the 5.6 million Palestinians registered as refugees with UNRWA, the agency says that some 1.5 million still live in its camps, “pending a just and lasting solution to their plight.”

The longer this state of deferral has lasted, the more abstract the political discourse around all Palestinian refugees has become. The refugees’ return, the Zionist has concluded, would spell the Jewish state’s end; their right to do so, the Palestinian negotiator has insisted, is sacrosanct. Neither talking point centers the day-to-day reality of the refugee herself, for whom “agency” (wikaleh in Arabic) is just a word branded on camp walls. And although her perspective would seem to be of even less consequence now — in the wake of our global pandemic — I wonder if the most jarring effects of this crisis may make more sense through a refugee’s eyes.

Sealed borders, relentless screening — these, after all, are the very markers of dispossession. As disruptive as they have seemed to those affected by them for the first time, they are as humdrum to the refugee as the succession of plans to resolve her plight. From the first UN resolution on Palestine in 1947 to the more recent “peace process,” none of these seemed bound to prolong the refugee’s placelessness. And yet, as with the pandemic’s restrictions, the exigencies of the present have a way of perpetuating themselves. The temporary quietly became permanent.

Witness Israel’s own reluctance to dismantle a coronavirus-focused surveillance program, modeled on a similar one long directed at Palestinians, that the state’s own Supreme Court ruled unfit for its citizens. Such bureaucracies, the world is learning, are born with their own sense of inevitability. But for the refugee, this comes as no surprise at all. Each year in exile, her freedom denied, reinforces the conviction that displacement and misplacement, as Joseph Brodsky wrote, are her commonplace. The longer this condition lasts, the more she must adapt to it. There is, simply, no choice.

But acceptance is another matter. In his 1988 autobiography, “Soul in Exile,” the immensely talented Palestinian writer Fawaz Turki recalls a scene in Lebanon’s Bourj el-Barajneh, where he and his family had been exiled to an UNRWA-administered camp. As the camp’s residents protest the agency’s attempts to install more permanent housing, one woman, Um Ali, vows that Palestinians “will never hammer one nail into a wall while we are outside Palestine.”

When I visited the Bourj el-Barajneh refugee camp in 2010, much of the defiance Turki described from a half century prior seemed to have receded into a sense of grudging normalcy. The camp was home to multi-story buildings, paved streets, community centers. As if to disavow these durable truths, the camp’s residents had lined its alleyways with used metal cans, some dense with herbs like coriander or thyme, others staked with slender tomato vines. That these reminders of home were themselves temporary, seeded in just enough dirt to keep them portable, made them ready props for the refugee.

Like her, we may never return to a world before this emergency. As we begin to contemplate a post-coronavirus age, one thing remains clear: the pandemic’s impact will continue to affect all facets of our daily lives. What seemed temporary to us last spring — the guarded distance, the indistinguishable faces — has now become de rigueur. And though we have told ourselves that the world will one day seem familiar again, that conviction has faded with each season of our altered reality. Eventually, we will have to convince ourselves that this is what real has felt like all along.

But first, we must endure the pull of memory, which inures us to our strange present. I remember hearing about my own father’s village in the West Bank, where he and his friends, eager to imitate their older brothers, fashioned a soccer ball from a drawer-full of socks. The plains where they would play were, in Baba’s memory, fragrant with the scent of citrus. In 1998, not long after the ill-fated Oslo Accords were signed, I managed to secure Israeli “permission” for him to return on a short visit, some three decades after Israel’s occupation forced him into exile. But within a day of our arrival in Tulkarem, the stench of chemicals from nearby Israeli factories had overwhelmed his senses and, with them, his cherished memory of the place.

In his remaining days, my father never spoke of that visit again, reverting instead to the same nostalgia that had sustained him though all his years in exile. Holding firm to an idea that no longer existed, he must have known what trick he was playing on himself. But the cost of abandoning this quiet act of self-consolation — this memory of a world more normal — would have been too high.

In that, I think, is the Palestinian refugee’s reminder to us all, particularly in this moment. As we reckon with our new normal, yearning for what we once knew is hardly an act of obstinacy. It is what sustains us. It is, in the final analysis, our human right.