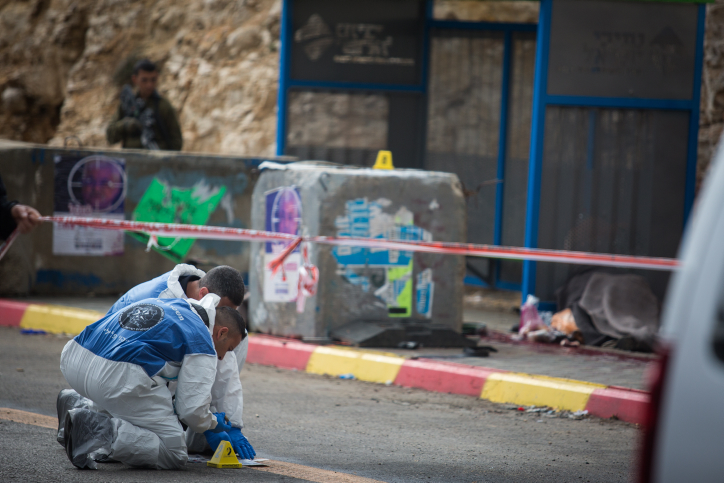 Israeli security forces at the scene of a shooting attack at the entrance to the Israeli settlement of Givat Asaf, in the West Bank, on December 13, 2018. Two soldiers were killed and several others wounded. Photo by (Hadas Parush/Flash90)

Go a little further back and there’s an actual war in Gaza, Israeli military operations in cities jokingly referred to as being under Palestinian control, more settler violence, the inevitable mounting casualties — some combatants but also children and random civilians on both sides.

The violence is inevitable. Three years ago, in a moment of violence that felt identical to this one, I wrote that it is precisely in times of violence that we most need to talk about peace. And yet then, and even more so now, there is no prospect of peace. Talking about peace feels like a delusion — one meant to distract from a reality in which so many people are working to advance the opposite of peace, whatever that might be.

“When people talk about addressing the violence at times like these they are generally referring only to Palestinian violence directed at Israelis, not the structural violence of Israel’s occupation and the deadly physical violence it visits on Palestinians,” I wrote. “Getting back to ‘normal’ is the goal of Israel and Israel alone.”

There is nothing okay about targeting civilians, and the shooting attack that left a pregnant woman in serious condition and killed her then-unborn baby, are nothing short of abhorrent. At no point in the history of the world has there been a single situation in which one population oppressively ruled over another that didn’t result in unpalatable violence.

There is also the palatable violence — the violence of a foreign military occupation lasting for half a century, the violence that we treat as a policy issue instead of ongoing, asymmetric, state-sponsored violence. And there is no way to maintain the occupation and oppression of millions of people without well-organized violence.

That has been the norm here for as long as many of us can remember. Waves of violence. Periods of relative calm, in different forms depending on your ethnicity or religion or nationality or where you live, filled with palatable and unpalatable violence. Three years ago, I wrote that this is exactly what institutionalized segregation, military occupation, and ethnic segregation and disenfranchisement look like.

Like three years ago, but much more so today, there are zero prospects of finding a way out of this permanent cycle of violence. There is nobody coming to end the occupation, and there will be no end to the violence until the violence of the occupation ends.

Today, the Israeli government is even more unapologetic about its intention to maintain the occupation forever, in some form or another. “I say this everywhere and I say it publicly, I said it in the years since Bar-Ilan 150,000 times: Israel and Israel alone will have the security responsibility in the area west of the Jordan,” Prime Minister Benjamin Netanyahu said for the 150,001st time a couple of months ago.

So where do we go from here? There are only two things we can be sure of these days. The first is that, tragically, there will be more violence, from both sides. The second is that change is not going to come from an Israeli government which sees the status quo as an acceptable reality. And with the current state of the international community, Washington included, nobody is coming to end the occupation.