Refugees’ fear of arrest, torture, and death should be sufficient justification for their inability to return their countries of origin. So why is the Israeli government refusing to grant African refugees asylum status? A personal story. 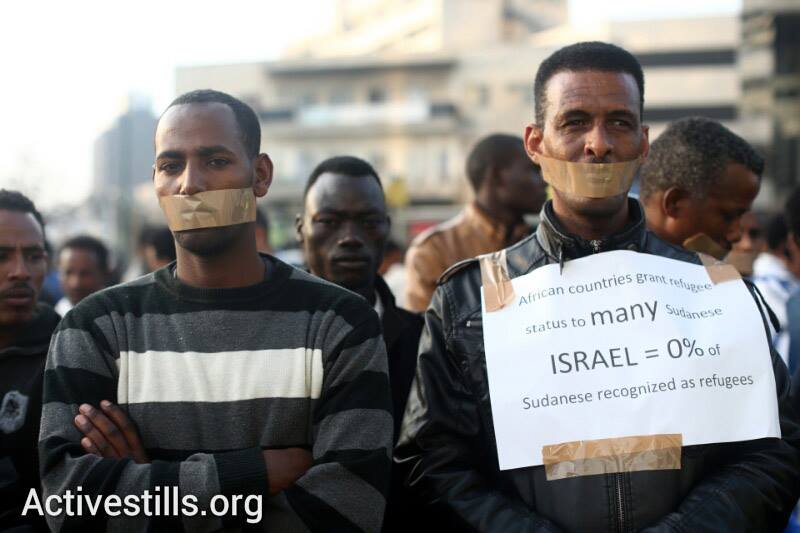 For the past three weeks, tens of thousands of African refugees in Israel, along with Israeli activists, have participated in demonstrations, hunger and labor strikes, and continual political engagement in opposition to intensified efforts by Israeli officials to detain refugees without due process. In response to these actions, Prime Minister Netanyahu stated that these people are not refugees, but rather “people who are breaking the law and whom we will deal with to the fullest extent of the law.”

This statement reflects the destructive denial by Israeli officials of the very real persecution experienced by Africans who have escaped to Israel. To deny refugees’ experiences and then construct policy based on this denial is to rub salt into refugees’ very real psychological and physical wounds. And, I can tell you, it is painful.

I understand the pain felt by refugees in Israel, because I was a refugee there myself. Although, I am now one of only a handful of refugees who have relocated from Israel to the U.S., I was one of the nearly 55,000 who live in limbo on a daily basis while applying for a status that grants temporary protection from deportation, but no other rights.

The 1951 UN Refugee Convention, which Israel signed and ratified, defines a refugee as a person who, “owing to a well-founded fear of being persecuted…is outside the country of his nationality, and is unable to, or owing to such fear, is unwilling to avail himself of the protection of that country.”

Prime Minister Netanyahu seems to think that my story (and countless other stories of other refugees in Israel) does not fit this definition.

I grew up in a village in Darfur, Sudan. One afternoon in August 2003, our small village was attacked by nearly 200 members of the government-affiliated Janjaweed militia. They shot at every human being in sight and burned all the houses. I was able to escape, but many of my good friends were killed. I  never saw my parents or younger siblings again. We experienced all of this just because we were Darfuri, whom the Sudanese government aims to eliminate.

From there I fled to Khartoum, the capital of Sudan. In Khartoum, I was arrested and detained on three separate occasions by the government’s security forces. On each occasion I was questioned, beaten, and tortured because I was Darfuri. During my final arrest, the security forces told me that if I did not leave Sudan within one week, they would kill me.

And yet, a law was passed in the Knesset on December 10th makes detention the only alternative to deportation, suggesting that Israeli officials have failed to understand why refugees cannot return to their countries of origin.

I knew other Sudanese refugees who became so fearful of the Israeli government’s xenophobic policies that they agreed to return to Sudan. In dozens of cases, refugees who are still living in Israel have tried to contact those who returned but have received no responses. Those living in Israel also contact the families of those who have returned, but the families have rarely seen or heard from them either. In 2011, a friend of mine decided to return to Sudan, because he feared the intensifying xenophobia and harshening refugee policy that he experienced in Israel. Sadly, within moments of his plane landing in Sudan, my friend was arrested by Sudanese officials. No one has heard from him since.

Refugees’ fear of arrest, torture, and death should be sufficient justification for their inability to return their countries of origin. However, I applied for asylum in Israel and never received an answer from the government.

While approximately 94% of the total refugee population in Israel is from Eritrea and Sudan, not a single Eritrean or Sudanese national has ever been granted refugee status.

We, refugees who have lived in Israel, understand that Israel is the only country where all Jews can feel at home. We recognize that Israelis have a right to protect their territory. However, refugees also have the right to be protected according to the UN Refugee Convention. Moreover, they have the right for their experiences to be acknowledged rather than virulently denied.

Guy Josif is a Darfuri refugee who escaped the genocide in Sudan by traveling to Israel, where he lived for five years before leaving to study in the U.S. in 2013. He is currently a student at College of Lake County in Illinois.

Anna Rose Siegel is a refugee rights activist in Tel Aviv, where she works at the African Refugee Development Center (ARDC) and volunteers with the Right Now campaign.