Thousands gathered in Tel Aviv’s Rabin Square; police let the protest go ahead after canceling it two hours before it was set to start; at least five anti-war protesters were attacked after the demonstration. 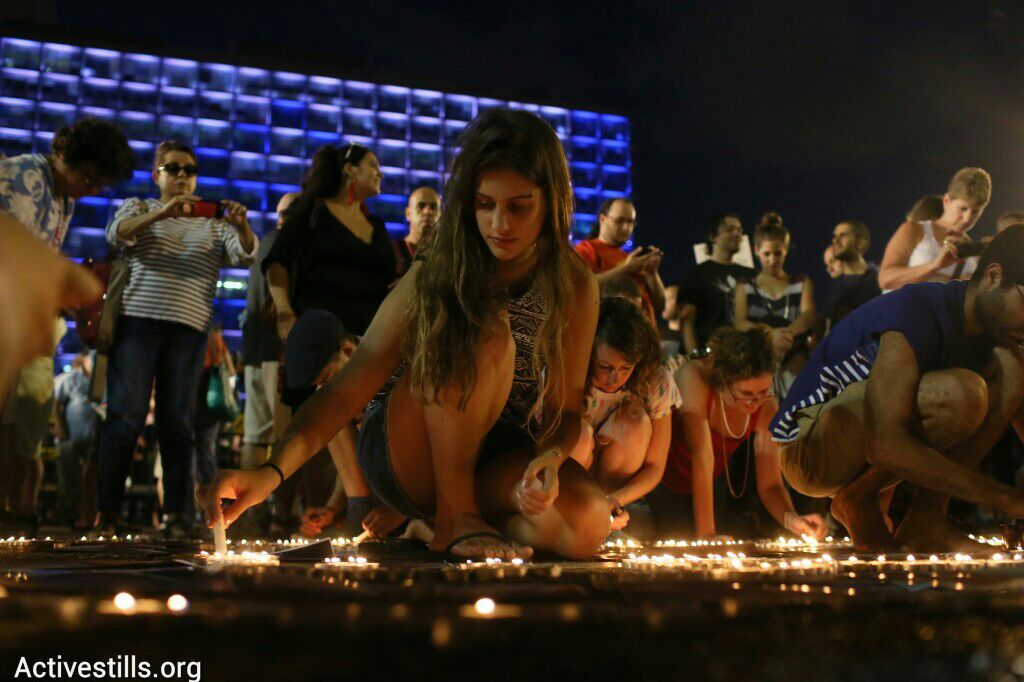 Some 5,000 Israelis on Saturday evening protested the war in Gaza under the banner, “No more deaths – Israeli-Palestinian peace, now.” The protest took place at Rabin Square in central Tel Aviv.

Speakers included Hadash MK Dov Khenin, an Israeli and Palestinian veteran from the organization Combatants for Peace, and Yifat Solel, the head of the Meretz party’s anti-occupation forum. Meretz, however, did not back the demonstration as a party. Ben Kfir of the Parents’ Circle, whose daughter was killed in a Hamas suicide bombing in 2003, also spoke, refuting the government’s claim that there is no partner for peace among the Palestinians. The speakers criticized the government for its attitude toward peace negotiations, and for resorting to war as a default policy. Demonstrators chanted “Jews and Arabs refuse to be enemies,” called for an end to the occupation and the siege on Gaza, and lit candles to commemorate the victims.

At anti-war protest in Tel Aviv “Forgive us” written in 1043 candles marking the number of ppl killed in Gaza &Israel pic.twitter.com/v5ZIBr3mHs

Roughly 300 right-wing counter-protesters were on the scene trying to reach the main demonstration, audibly chanting “Death to Arabs” while Sulaiman Khatib, co-founder of Combatants for Peace, spoke. A large police presence circled the square in order to keep the sides separate. Four were arrested.

Police ended the protest at around 10 p.m., citing resumed rocket fire from Gaza, two hours before a “humanitarian” ceasefire was set to expire. Soon after the demonstration dispersed, counter-protesters began following the demonstrators home. Verbal attacks turned physically violent; one anti-war demonstrator was beaten with a metal rod and required stitches, and two were attacked with pepper spray. Some two hours before the protest was set to begin, police canceled it over what they said was fear of a rocket attack. The permit for the demonstration was reinstated only an hour before it began – by which time busses of protesters en route for Tel Aviv had turned back. 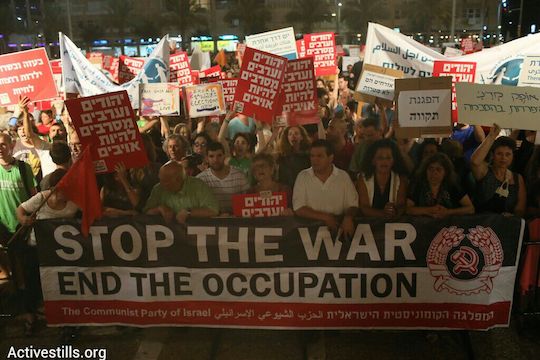 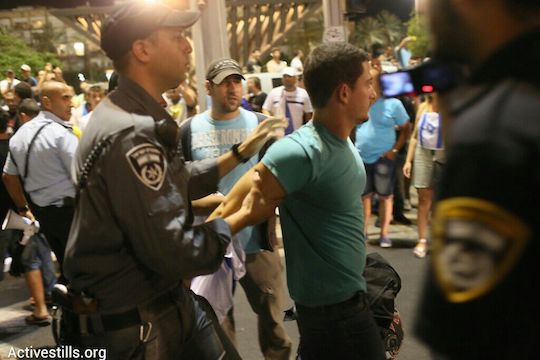 Rightist counter-protester arrested at a demonstration against the Gaza war in Tel Aviv, July 26, 2014. (photo: Activestill.org) 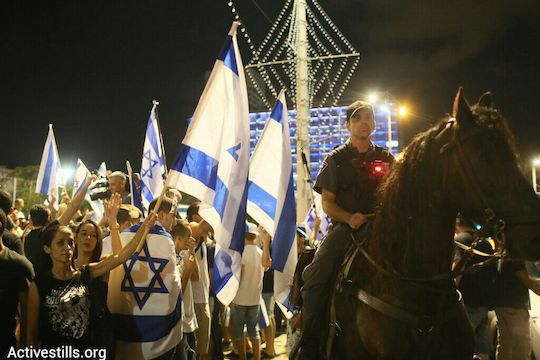 The invitation to the protest read:

On Saturday, the peace camp takes a stand at Rabin Square

The war is taking a heavy toll in lives and injuries on both sides, in destruction and horror, in bombings and rockets. We answer this by taking a stand and making a demand: end the war now!

We must end the war and start talking with the recognized Palestinian leadership of the West Bank and Gaza to end the occupation and the siege and to achieve independence and justice for both peoples – in Israel and Palestine.

Instead be being drawn, again and again, into more wars and more military actions, it is now time to lead the way to dialogue and political settlement. There is a political solution. What price must we pay – the people of the South and the other residents of Israel, and the people of Gaza and the West Bank – until we reach that solution?

Together, Jews and Arabs, we will overcome occupation and war, hatred, incitement and racism – and offer a path to life and hope

Related:
How can you possibly oppose this war?
Israel has alternatives to this war