By simply discussing the disqualification of MK Haneen Zoabi and Baruch Marzel from the upcoming elections, the extreme right has already claimed another victory. 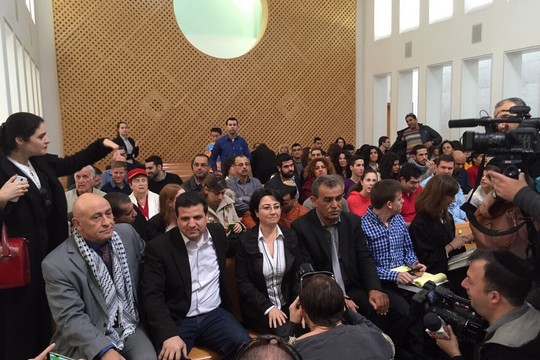 The double-hearing held in the Supreme Court on Tuesday under an extended panel headed by Justice Naor, to discuss the disqualification of MK Haneen Zoabi and Baruch Marzel, respectively, was one of the more depressing displays of the absurdity we call “Israeli democracy.”

The constant worshiping of “balance” in the name of some imagined national sanity brought Zoabi – who represented the only party that calls for full equality in Israel – to the same defendant’s chair as the heir to Rabbi Meir Kahane, whose party was disqualified from the Knesset 27 years ago for its outright racism. Zoabi and Marzel were sent to the Supreme Court by the Central Elections Committee, which just barely voted to disqualify the latter. Zoabi, on the other hand, was almost unanimously disqualified at the end of an especially violent hearing, which was actually more similar to a kangaroo court.

There’s your holy “balance” in all its glory. Even the reasons for disqualification presented by the appellants echo each one another: the appeals submitted against MK Zoabi are based on a number of remarks attributed to her, which ostensibly express support for a violent struggle against the State of Israel, and reject its existence as a Jewish and democratic state. Similarly, the appeal to reject Marzel was based on the claim that he incited to violence as rejected the democratic character of the state.

Because the claims made by the appellants are so similar, the cases made by the defense of both Zoabi and Marzel were nearly identical: both called into question the accuracy of the quotes, taking the time to give reasonable explanations for their clients’ words. Attorney Hassan Jabareen, the founder and General Director of Adalah, who represented Zoabi, told the court that if it starts disqualifying candidates based on their statements alone, half of the Knesset members would find themselves out of a job.

Furthermore, because some of Zoabi’s remarks were made in Arabic, the issue of reasonable interpretation becomes even more complex: do the justices really have the ability to understand the word “muqawama” (“resistance”) in its natural context? Does the word “hissar” (“siege”) necessarily refer to a military siege, or can it be understood in a political context? Perhaps more Arabic speakers among the Supreme Court Justices would have been a big help during the hearing.

A hearing where one absurdity is followed by another, and before you know it, Jabareen pulls out the Prevention of Terror ordinance, and claims that had his client actually supported terror, she would have been convicted under that specific law. Furthermore, he stated, even the Shin Bet hasn’t set its sights on Zoabi. Who in their right mind could believe that the General Security Services would indirectly advocate for a representative of Balad?

Jabareen was followed by the attorneys representing Avigdor Liberman and Yariv Levin, the two appellants, followed by a representative of the attorney general, who opposes both appeals. Did I already mention the holy balance? And while Levin’s attorney spoke beautifully about how the conditions for a pluralistic democracy are based on a willingness to play by the rules of democracy, one could already hear the faint noise of Marzel’s supporters outside the hall.

Marzel himself sat inside the courtroom  for the duration Zoabi’s case, alongside his friend and new-found political ally Eli Yishai. The sight of those two giggling to one another both made my stomach turn, and made me think about how much damage Yishai caused Shas in his years of leading the party, and about the path that eventually led him into the arms of Marzel and fellow Kahanist Michael Ben-Ari.

The end of Zoabi’s hearing brought about a rather interesting changing of the guard: Zoabi left the courtroom accompanied by Joint List leader Ayman Odeh, as well as Balad members Jamal Zahalka and Bassel Ghattas, followed by a group of supporters. Her place was taken by Marzel, Attorney Itamar Ben-Gvir and a group of supporters who waited outside the court. Even Benzi Gopstein, the leader of the extremist anti-miscegenation group Lehava, came to show solidarity with his comrade.

Much of Marzel’s hearing dealt with the degree to which he identifies with Rabbi Meir Kahane’s teachings. Ben-Gvir went to great lengths to explain why this isn’t the same Marzel, and that even Ben-Gvir himself isn’t the same person he was a decade prior. People change all the time, he claimed, and in any case there is nothing inherently racist in the slogan “Kahane was right.” It was quite a sight: Itamar Ben-Gvir standing before a panel of Supreme Court justices, trying to explain that the same person who just months ago organized an improvised referendum over the question: “Who was right: Rabin or Kahane?” is not a Kahanist.

The Supreme Court is expected to announce its decision in the coming days. In light of the precedents set by previous years, and due to the position of the state attorney on the matter, it is likely that Zoabi’s disqualification will be rejected and she will be allowed to run in the upcoming elections.

But in a deeper sense, the extreme right has already won twice: once, by bringing Zoabi back to this position time and time again, which undoubtedly perpetuates her image as an extremist among the Israeli public.

The second victory is the opening of a public discussion over the legitimacy of Kahane and Kahanism. The attempt to separate Marzel from the teachings of Kahane is so baseless, that it is impossible not to see it as a brilliant PR stunt. If Marzel wins, Kahanism will enter the Knesset through the front door with the blessing of the Supreme Court. If he loses, he will become the victim of a legal system that is only losing the trust of the Israeli public day after day. This position of victimhood comes with a great deal of political capital, which people like Yishai and Gopstein will be happy to use. After all, what are friends for?