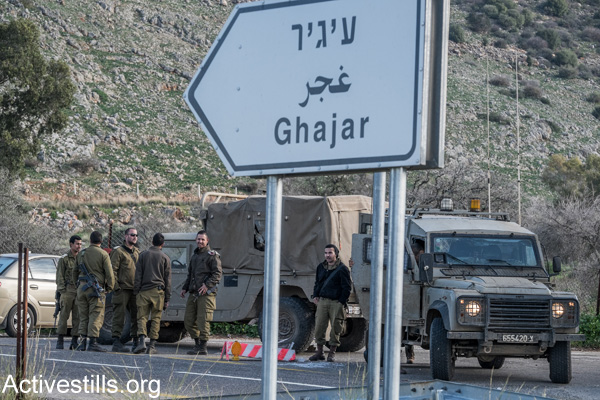 Israeli soldiers stand near the entrance to the divided village of Ghajar on the Lebanese-Israeli border, January 19, 2015. (Yotam Ronen/Activestills.org)

It was a balmy Saturday night in Tel Aviv. I stood on the smoking patio of a club which overlooks the sea, and there was a soft breeze which carried on it the scents of the Mediterranean, the various shwarma and falafel restaurants which dominate that part of the city, and the perfumes and colognes of the patrons around me. As I sipped my beer, a girl approached me. She was young, American. She had heard me translating something from Hebrew to English for my friend and she was impressed. “You know Hebrew?” she asked me.

“Did you make Aliyah?” she asked.

“Did you have fun?” she asked.

“But why?” she continued, wrinkling her nose in confusion.

In the United States, asking such a question so casually is unheard of; I can’t imagine a stranger pestering a veteran as to why their army service wasn’t “fun.” And you certainly wouldn’t expect such a question in a crowded nightclub while surrounded by partygoers downing shots of vodka. In Israeli society, military service can mean many different things, and is so normalized that one could reasonably expect a “yes” to this question. Furthermore, if one did suffer during their army service, there is intense pressure not to say so. A shrug and quick change of subject would be appropriate. Admitting that I didn’t enjoy my army service is a shocking act.

When I was drafted to the IDF, I was incredibly naïve. Having immigrated to the country a mere seven months before, my expectations were based on the experiences friends shared with me. I had plenty of friends who had fun in the army. They mostly had jobs arranging field trips for soldiers from their bases and organizing special sports and relaxation days, and taking tourists from Zionist youth groups to volunteer in army bases for three-week sessions. I viewed mandatory conscription as something that would be inconvenient, but pictured myself posting for a few too many Facebook selfies in uniform and having something impressive-sounding to list on my resume. I didn’t expect to serve at a checkpoint. I didn’t expect to hate myself for it.

After three months of basic training, I was assigned to sit in a small beige room for 12 hour shifts, in an unimportant IDF base on the outskirts of the northern border town of Kiryat Shmona. The title they gave me was “intelligence operations officer,” an extravagant term for a job which consisted almost entirely of answering the phone. The phone calls originated from an Arab village called Ghajar, which fell under my base’s jurisdiction. Although the townspeople were Israeli citizens, possessing blue identification cards, Israeli driver’s licenses and passports, and paid property taxes to the state of Israel, they were viewed as suspect, possible enemy combatants. The entire town was a security risk. I was confused. 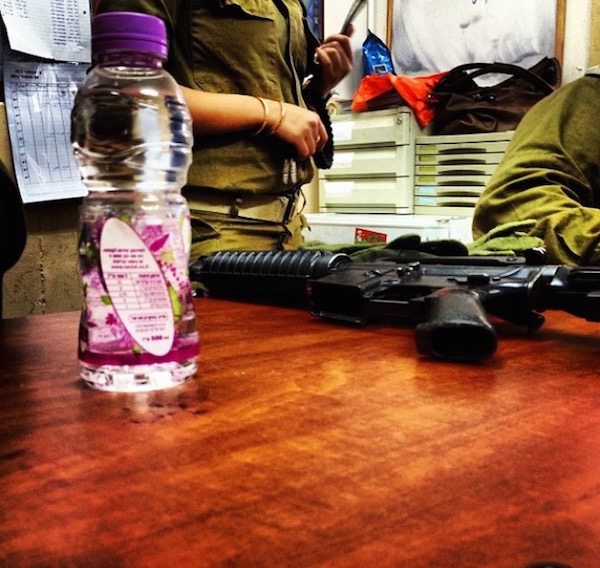 ‘The title they gave me was ‘intelligence operations officer,’ an extravagant term for a job which consisted almost entirely of answering the phone.’ (An Instagram photo of the office where the author served.)

The situation was clarified to me by a sweet 19 year old in my unit. “The town,” he explained, “is cut in half, like this.” With two hands, he sliced the air, from above his head to his toes. “Half belongs to us. Half belongs to Lebanon. It’s a closed military zone. So people can’t just come and go,” he said, sweeping his hands back and forth, “It’s not safe. They need to be approved by us before they enter. And if anyone from outside Ghajar wants to come inside,” he wagged his finger,“they need a permit, in advance. So they need to call here.” And the phone rang, day and night.

Within a week, I understood that the majority of the phone calls were from the same 30 people. I began to recognize some their voices, remembering their names before they identified themselves. There was one man who, upon hearing my heavy American accent in Hebrew, proudly informed me that he was an English teacher. When I asked for his surname, he responded in my native language, “K-H-A-T-E-E-B,” his pronunciation of each letter careful and practiced. I also became acquainted with a great-grandmother, born in the town but who had moved to Nazareth. She visited her family every Thursday, and stayed for three days each time. Her calls were at exactly 11 in the morning on Wednesdays.

The callers were normal people, inhabitants of a town that had existed for at least 300 years prior to the establishment of the state. To say that the checkpoint, fence, and permits were disruptive to their lives would be an understatement. Nothing was ever certain for them. Permits were mysteriously denied to someone for “classified reasons”; the next day, permits could be granted to the same individual. People were wary about venturing out of the town; a quick trip to Kiryat Shmona could potentially result in an hours-long ordeal upon return. Moving to Haifa to study in university could lead to a crippling change of status; one could be reclassified against his will as a “non-resident” and would need to request a permit, 24 hours in advance, in order to visit his family home. Conditions inside the town were poor; even candy for mini-markets had to gain army approval before it was brought inside. Many companies had ceased making deliveries to the town. I was told of restaurants with spectacular views of the Hasbani River, which had once hosted droves of Jewish tourists on weekends — now permanently empty.

The next few weeks passed slowly. It started to become difficult for me to sleep at night. The people of Ghajar had committed no crime, save for being residents of their town. My presence in the base and compliance in the role I was given were tantamount to an endorsement of this system. By answering the phone and compiling the lists, I was taking an active role in the siege of these people’s lives. I lay on my back in my barracks, staring into the darkness, questioning myself.

“It doesn’t actually matter that you’re doing this,” one of my friends told me, trying to assuage my guilt. “If it wasn’t you sitting in that chair answering the phone, it would be someone else. It would have happened with or without you, and it’s going to continue once you’re out of the army.” Rather than finding comfort in her words, I grew more dejected.

I wasn’t the only one assigned to answer the phone calls from Ghajar. There was a boy in my unit who covered the other 12 hours of the day, and a girl who filled in when both of us went home for weekend furloughs. On one Thursday, before leaving for my break, I stopped into the room for a cigarette and chat with my colleague. We smoked and drank coffee and laughed. The phone rang and he put the call on speaker. It was an older woman, distraught. She had been issued a permit, she said, but was at the gate of Ghajar and denied entry. The permit wasn’t being found by the soldiers stationed there. Please, she begged, tears obvious in her voice. I know I got the permit. Whatever error had been made, human or otherwise, was impossible for us to determine. “No permit, no entry,” said my colleague. Please, she cried. “I already told you,” my colleague snapped, “No permit, no entry. Are you deaf?” He slammed down the phone. For a moment, we were quiet.

He turned to me and rolled his eyes. “What don’t they understand?” he asked me. “They’re always whining.” He exaggeratedly imitated her cries, rubbing his fists against his eyes. I felt sick.

Although hardly an atrocity, these and other little indignities weighed heavily on me. Incidents like this weren’t anomalies; it was common knowledge that we could speak to the residents of Ghajar in whatever way we saw fit. “Cakha zeh” (That’s the way it is), or “Ein ma la’asot” (There’s nothing to do be done about it), were frequent refrains when I raised my concerns to my fellow soldiers about the injustice of the situation. Nobody seemed particularly worried about the grim lives of some Arabs in Ghajar. The fence and checkpoints and permits loomed over the town, permanent institutions. It was clear that nothing would be changing in the near future.

“But why?” The girl in the club was waiting for my answer. Why hadn’t I had fun in the army?

My friend approached us and had overheard the end of our conversation. She squeezed my hand supportively, as if to tell me that it was alright, but also signaling to me not to make a fuss. No reason to ruin the night.

She nodded politely and turned back around. She began chatting with other people and within a few seconds laughed, full of joy. I stood quietly and watched the sea.

Lauren S. Marcus is an American immigrant to Israel originally from Los Angeles, CA. She is a student of government at the Interdisciplinary Center Herzliya.