For the first time since Hamas won elections in 2006, an Arab Islamist party has successfully contested a national election. Its success may serve as an inspiration for other movement, like Egypt’s Muslim Brotherhood, to do well in their vote. And though the party is trying to distance itself from either counterparts, many Tunisians are worried it’ll drag them in that direction.

They were banned under the authoritative government of then-President Zine el Abidine Ben Ali. But now, Tunisia’s newly-formed Islamist party, Ennahda, has risen like a phoenix, much to the chagrin of many. On Monday night, projections from Sunday’s historic vote – the first free and open poll since Tunisia’s independence more than half a century ago – showed the party securing large numbers in several constituents, most of them in areas outside the “liberal coast.” It was unclear if Ennahda will have enough seats in the 217-member Constituent Assembly to hold a majority, or if they will have to share power, but that has not stopped them from celebrating. 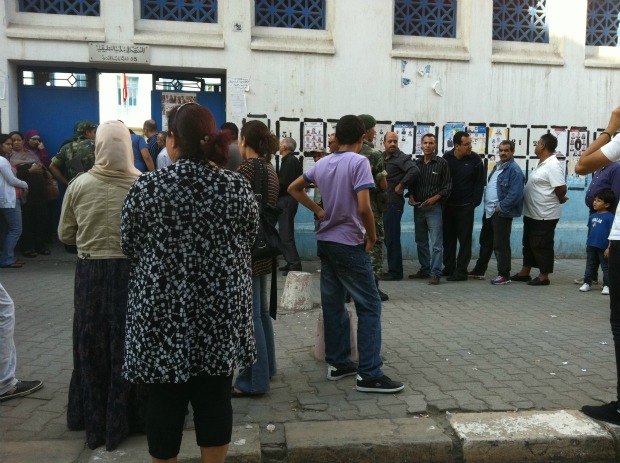 Already, the Progressive Democratic Party (PDP), one of many secular, liberal lists, conceded defeat. Its leader said the PDP will gladly serve as a strong voice in the opposition, reaffirming his pre-election promise that he would not sit in a coalition with the Islamists.

A win for Ennahda does not mean its leader, Rachid Ghannouchi, will be the next President or Prime Minster. Nor is he interested. Those are temporary positions while the Constituent Assembly writes Tunisia’s next constitution. The old one, dating back to 1959, heavily weighed in favor of the President, given immense, consolidated power to Ben Ali, and, before that, to his only predecessor, Habib Bourgiba (here still considered a national hero, unlike his successor). So what is more important right now is not the short-term job appointment, but rather the long term perks of being able to proportionally influence the new constitution. That is why this election is so important, though it was not clear here that everyone undertsood that.

What a comeback.
Rachid Ghannouchi is a white-haired, slightly subdued fellow. His speeches do not necessarily light-up a room of supporters, perhaps like those delivered by Hamas’ Ismael Haniyeh. But he is not a weak man. He spent 22 years in exile in the United Kingdom after suffering from harassment for years at the hands of Ben Ali’s secret police.

His return to Tunisia drew much praise, but also caused a great storm. He arrived at Tunis Catharage Airport to a wave of adoring fans and supporters. But also immediately in this liberal country with its strongly-defended secular lifestyle, many people became nervous. They fear his return and success in the polls would pave the way for the introduction of headscraves, modest public behavior, and the sidelining of women’s rights. During his campaign, Ghannouchi promised none of that would happen, and that he would continue to uphold the liberal values of this country. 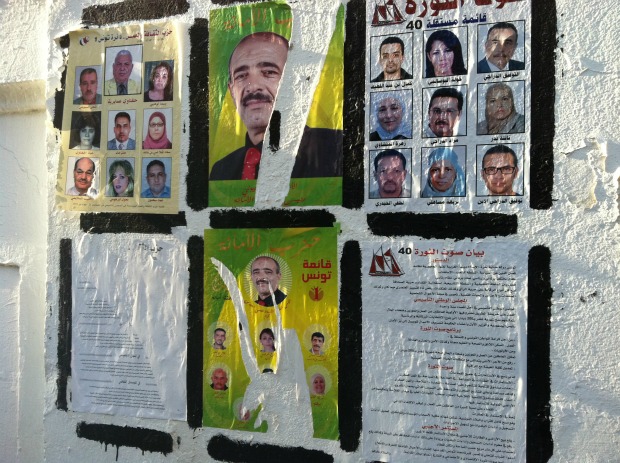 When he went to vote on Sunday, he arrived and walked with his entourage directly to the front. People who had been patiently waiting to vote yelled to him, “there’s a queue, there’s a queue.” And indeed, there was a queue, about one-kilometer long. One man pointed to the back and yelled out, “democracy starts back there.” And Ghannouchi went to the back and waited to vote, just like everyone else. The public gesture suggests that he is capable of listening to people. But his time at the polling station also revealed that many mistrust him, for as he left, some yelled at him, calling him an assassin and saying “degage, degage” or “leave, leave.” The same French word was yelled at Ben Ali when the people wanted him to go.

A slick political machine
Ennahda ran a smooth campaign, launched in Sidi Bouzid, the inland city 300 kilometers southwest of the capital. Ghannouchi himself was in attendance. This was where, in December 2010, 26-year old Mohammad Bouazizi set himself alight in protest of government corruption, and social and economic inequality, after a policewomen confiscated the fruits and vegetables he was selling without a permit. His self-immolation sparked Tunisia’s Jasmine Revolution and inspired a number of other uprisings around the region in what came to be known as the Arab Spring. Within one month, Ben Ali fled to Saudi Arabia, ironically paving the way for Ghannouchi’s return.

It was probably an appropriate tribute to honor Bouazizi by starting there. Ghannouchi was accused of political exploitation. Still, the party grew quickly and spread greatly. Satellite offices opened all across Tunisia. Supporters attending rallies were given free bottles of water and were entertained by spinning DJs. And a party headquarter was opened in downtown Tunis in a facility that exaggerated what many claimed to be Ennahda’s modest roots. In recent days, allegations began emerging over improper financing – namely, that Ennahda received funds from foreign entities in the Gulf (alluding to Saudi Arabia). Though the group’s financing is not transparent and it likely will not publish any figures any time soon, Ghannouchi denies any wrongdoing.

But now the work starts
The Constituent Assembly has a lot to get done, and not a lot of time in which to do it. And let’s not forget, the world is watching. First, Ghanoucchi will have to persuade the general public that he is not taking Tunisia in the direction of Sharia law, or trying to mimic Islamic politics in Gaza or Egypt. Failing to do so, coupled with the continued suspicion that many seculars have that forced Islamic ways will seep into society, will drive thousands of people back into the streets. Second, he and most likely his coalition partners will have to figure out how to get this country’s economy back on track. A year ago, its growth rate of five percent was the envy of most countries in the region. For 2011, it is expected to be zero, and that is optimistic. Nationally, the unemployment rate is now seventy percent, which is bad news for Tunisia’s well-educated young people. 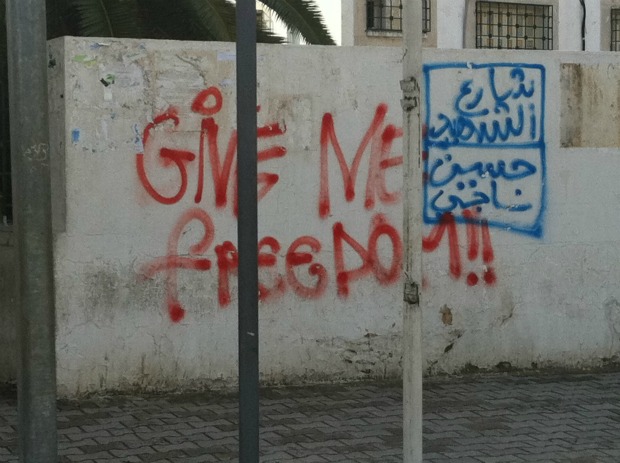 The writing is on the wall. "Give Me Freedom" grafitti in Sidi Bouzid, Tunisia, 22 October 2011, the location were 26 year old Mohammad Bouazizi set himself alight (photo: Roee Ruttenberg)

Ghanouchhi says he would prefer to emulate the political styles of Turkey, where Prime Minister Reccep Tayip Erdogan’s Islamist AK Party earlier this year secured yet another election win. This, despite being based on Islamic values in a country that has an officially secular position. If doing so means he will “make nice” with everyone much more quickly, Tunisia will be able to get onto more important things much more quickly. There are many for whom even the “Turkish-style” is a little too much, and they have threatened to go out to the streets en masse at even the slightest suggestion. But by the time they get there, the streets might already be full. In Sidi Bouzid, residents say things have actually gotten worse, and less and less people have jobs. Many here have already accused the (wealthier) coastal cities of stealing the uprisings from the (poorer) inland cities, and some are already talking about a second revolution. Ghannouchi and the rest of the Constituent Assembly will have to work quickly and effectively to ensure neither of those happens.
—————————————————————————————————————–
[youtube]http://www.youtube.com/watch?v=_O-BfuEVDfc&feature=channel_video_title[/youtube]