The Daily Media Roundup: Jerusalem is testing Obama after the midterms; Kadima strongman is out of the Knesset – for now 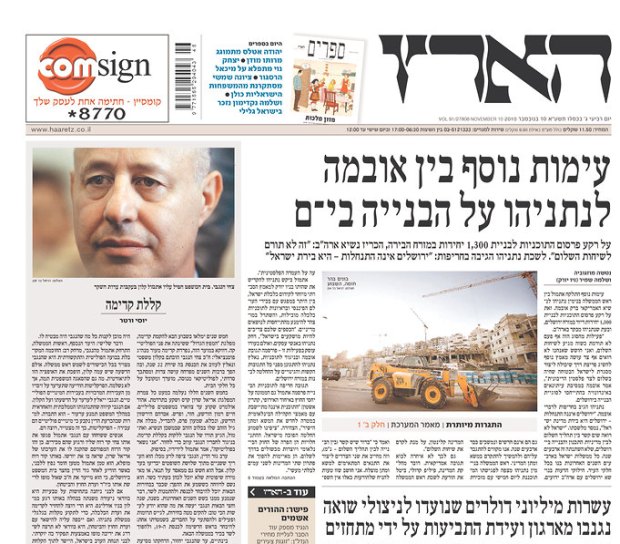 The Headlines: Fool me Twice, Obama?

> Obama to Netanyahu: Construction in East Jerusalem hurts the peace process. Netanyahu: oh, no it doesn’t. US: it does to! As usual, for this government, no lessons have been learned (or is it a test to the president’s determination after the midterms?).

> The story of ex-minister and power broker, Tsahy Hanegby (Kadima) lives on, but this time at least the newspapers bother to explain why it is important. The judges ruled that Hanegby would be disqualified from holding public office, because of his conviction for perjury. This means that he would have to resign his Knesset seat, but could run in the next election, and even become a minister. This spells trouble for Netanyahu, who has to worry about a key opposition leader, with no incentive to support entry into the current coalition, and every incentive to work towards early elections.

> The Jewish claims conference, responsible for dispensing compensation to holocaust survivors was defrauded of tens of millions of dollars by false claimants.

The Sidelines: The Jerusalem Hypocrisy Syndrom

> While new homes for Jews are being planned in East Jerusalem, the municipality is proceeding [Heb] with plans to demolish Palestinian homes in the city.

> The IDF is considering [Heb] ending arrest operations in Palestinian cities, where security is supposed to be under the exclusive control of the Palestinian Authority.

> The Knesset is debating a bill to end pension payments to former MK Azmi Bishara (Balad) who fled the country for fear of being arrested for alleged contacts with “foreign agents”.

> The government is planning to build a holding facility for asylum seekers, where their basic needs will be accommodated, but they will not be allowed to work or reside anywhere else. The purpose of this initiative is to allow the government to enforce the ban on employing asylum seekers, which it currently cannot do, because they have no other way to make a living (Ma’ariv).