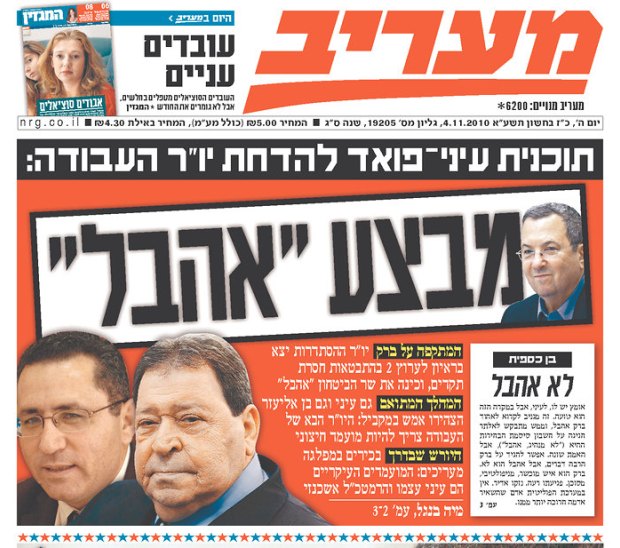 It’s time to learn a new word: Ahabal. That’s the term union leader and Labor strongman Ofer Eini has chosen to describe his party boss, defense minister Ehud Barak. Eini was interviewed for channel 2, and when referring to Barak’s latest scandal – his wife’s hiring of an illegal immigrant – he said, in what became an instant iconic political moment:

“You are a minister. [How are] you bringing a [illegal] Philippine home? You need to be an Ahabal to do that.”

Last night, at the same time channel 2 was running promos for the Eini interview and the “Ahabal” sentence was revealed, other labor strongman, former defense minister Benyamin “Fuad” Ben-Eliezer attacked Barak in a gathering of his supporters.

Together, Fuad and Eini control Labor. Just a year ago they were Barak’s allies, the ones that allowed Labor to enter the Netanyahu government. Their attack on the party leader – while uncoordinated, according to both – means only one thing: Barak has lost his party. “The end of Barak’s term in Labor,” declared Haartez’s top headline

Three of the four major tabloids made attack on Barak their front story, with Maariv calling it “Operation Ahabal”. Haaretz’s Yossi Verter explains that the attack on Barak won’t lead to Labor leaving the government for now, since both Eini and Fuad are searching for a party outsider to replace Labor’s leader.

Israel Hayom, the pro-Netanyahu, Pro-Barak, Pro-government free tabloid, is the only paper not to refer to developments in Labor as the top story of the day. Instead, it has a one-word headline (“we were defeated” – in Hebrew it’s a single word), with a picture of Barack Obama.  PM Netanyahu is quoted on page 3 saying “we will continue working with Obama”. The paper’s top pundit Dan Margalit calls Obama “the president who diverted from the American way.”

> In the north, a policeman shot and killed a taxi driver who tried to escape from him. The police are backing up the cop, who said the driver tried to run him over. A few months ago a policeman killed an Arab car thieve. Will this new incident renew the debate over the trigger happiness of Israel’s policemen?

> The word “traitor” was sprayed on the fence outside IDF prosecutor Major Generel Avichai Mendelblit’s home. According to army sources, Major General Mendelblit became the recent target of extreme right wing Jewish elements for his decision to press charges against a few soldiers for illegal conduct during operation Cast Lead.