The British author visited the Sheikh Jarrah protest – but also intends to receive the Jerusalem Prize for Literature from the patron of the city’s settlers, mayor Nir Barkat 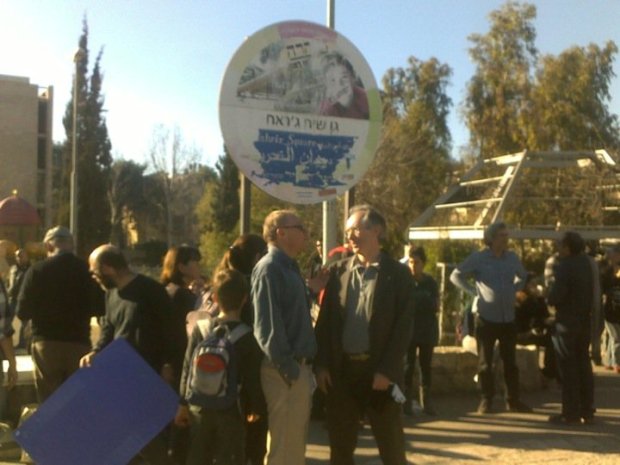 The celebrated British author Ian McEwan joined today the weekly protest in the neighborhood of Sheikh Jarrah, where Palestinian families have been evacuated from their homes to make room for Jewish settlers.

Ironically, McEwan arrived to Israel to receive the Jerusalem Prize for Literature from the hands of the city’s mayor, Nir Barkat. Mayor Barkat is one of the driving forces behind recent attempts to expand Jewish settlements and housing projects into Palestinian East Jerusalem. Currently, he even refuses to carry out an Israeli court order demanding the immediate evacuation of a house in the Palestinian neighborhood of Silwan, illegally built by rightwing settlers. Many grassroots activists blame Barkat for the rising tension between Jews and Arabs in the city.

Before flying to Israel, McEwan rejected calls from a group called British Writers in Support of Palestine to turn down the Jerusalem Prize. In his replay he wrote:

“There are ways in which art can have a longer reach than politics […] Your ‘line’ is not the only one. Courtesy obliges you to respect my decision, as I would yours to stay away.”

The protest in Sheikh Jarrah started a year and a half ago, following the evacuation of two Palestinian families from their homes. Since then, more eviction orders have been issued, and construction began for a new housing project for Jews at the site of the old Shepherds Hotel, also in Sheikh Jarrah. Solidarity Sheikh Jarrah, which leads the protest in the neighborhood, has recently organized demonstrations in other parts of the city where Palestinians are threatened by eviction orders and by new municipal plans, among them in Silwan.