An examination of Israeli public opinion toward U.S. President Obama and the two-state solution. The picture isn’t as bleak as the mainstream media might lead you to believe. 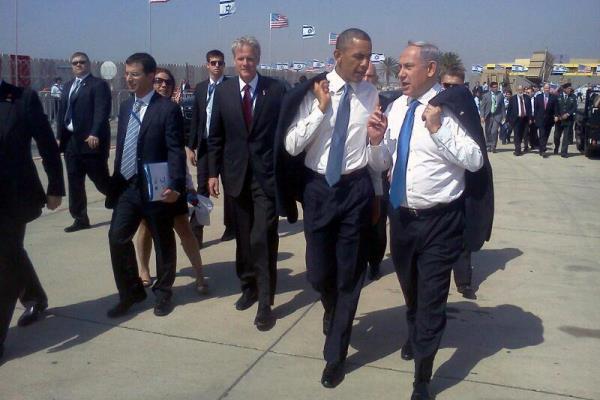 As President Obama continues his meetings in the region today, making the rounds to Ramallah and then back to Jerusalem, it is useful to keep in mind some trends regarding public opinion. Here are two specific themes that are relevant for this trip – attitudes towards the two-state solution to which he and his main interlocutors are so committed, and attitudes towards him.

The survey also tested the “whole package,” by asking respondents separately about specific clauses of an agreement, based mainly on the Clinton/Geneva parameters regarding final borders and territorial exchange, a demilitarized Palestinian state, refugees, security, Jerusalem, and the “end of conflict” clause. Here are the results:

•  Among Israelis, a 56 percent majority supports the plan and 40 percent are opposed – this is almost the same data as the previous year.

•  Among Palestinians, a majority of 53 percent opposes the plan and 46 percent supports it – a significant change from last year, when the population was split, but 50 percent supported it. Apparently somewhere between Operation Pillar of Defense and the UN bid, which hasn’t changed much so far, Palestinians lost some motivation for the two-state plan along the way.

However, another study shows the Israeli public is losing patience with some aspects of the permanent conflict for internal reasons. In an internet survey commissioned by a grassroots movement called “Electing a social budget” just prior to the January elections, respondents were asked about the extent of spending cuts they would recommend for a number of areas, in order to cut the country’s deficit. The survey was from 2-6 January, had 591 respondents, and 4.1 percent margin of error.

•  That number is 50 points higher than the second-ranked answer for the highest spending cuts. But interestingly, second place went to the security budget (14.8 percent chose to cut spending), which is actually tied (within the margin of error) for the third-ranked “large cuts” item: infrastructure such as train tracks (14.6 percent).

When considering the average from the 0-5 ranking of the extent of cuts to the budgets – the settlement budget obviously had the highest score, with 4.2 (remember, “5” denoted the largest cuts). But this was also true among those who identified themselves as right wing: the average score was 3.8, but this was higher than the average for any other item among the Right.

‘Why Did Obama Throw Israel Under the Bus?’ The Israeli answer – he didn’t.

The myth that Israelis dislike Obama tends to be based on media surveys that are either shoddily conducted or interpreted, like the following Maariv poll by Ma’agar Mohot (Hebrew ) from the day before the president’s visit. The article never mentions sample size or margin of error – those minor details. It refers to a poll of the “Israeli public,” without specifying whether this is a “representative sample” (i.e., includes Arabs) or Jews only, which is also common.

•  The article reports that 38 percent think Obama is hostile to Israel, while one-third (presumably around 33 percent, but the article does not specify) think he is friendly and 14 percent say he is indifferent. If it’s not clear: A minority thinks he’s hostile.

•  The article specifies that only 10 percent love Obama, while three times as many (32 percent) don’t love him but respect him. Well. Do Israelis really have to love him?

However, it is true that Israelis have held suspicious, mixed and changing views during Obama’s first term, and questions about whether he was more loyal to Palestinians or Israelis sometimes favored the former. Nathan Jeffay gave a good review of the data and speculations about their meaning – back in 2009. But by April 2012, Israelis were evenly divided about which side he was one (one-quarter each thought he was more pro-Israeli or pro-Palestinian), and the plurality thought he was neutral (36 percent).

But the latest Peace Index survey from Tel Aviv University and the Israel Democracy Institute (n=600, 11-14 March, representative sample) asks questions with more substance and depth, and the picture is quite different. When the survey asked if people thought President Obama’s attitude toward Israel was friendly or not:

•  Only 37 percent of the Jewish respondents say he is friendly to Israel, but that’s more than three times as many as those who think he is hostile (10.5 percent).

•  The large plurality, 44.5 percent of the total public, thinks he is “professional/neutral.”

The survey then asked the controversial question about whether Obama sides more with Israelis or with Palestinians.

•  One-quarter (25 percent) actually believe he is more pro-Israel, compared to 18 percent who think he is pro-Palestinian.

•  It is true that among Jewish Israelis, just 18 percent think he is pro-Israeli and 23 percent view him as pro-Palestinian.

•  Yet in both cases (Jews and total population), the majority believe that Obama is neutral (over 50 percent), which is not exactly a bad thing for someone who is supposed to be an honest broker.

•  If only Palestinians felt that way; they don’t. Although the sample is too small to be certain, the trend is also very strong: Seventy percent of Arabs in Israel in this same survey think that he is more pro-Israeli, 6.6 percent view him as pro-Palestinian and under one-fifth view him as neutral.

Here’s the final question from the Peace Index that is indicative: “To what extent do you currently trust or not trust U.S. President Barack Obama to consider Israel’s interests and safeguard them?” The response from the general public is solid, and a far cry from the throwing-under-the-bus myth:

•  A 52 percent majority say he can be trusted (greatly or somewhat); 46 percent do not trust him (somewhat or “not at all” – but the latter is just 12 percent).

•  Among Jews, 45 percent trust  him to consider and safeguard such interests, compared to 53.5 percent who do not. Again, among Jews who do not trust him, 40 percent give a moderate answer (“not so much”) and just a minority – 13.5 percent – say “not at all.”

Still, one is led to wonder what maintains the suspicion lingering among many Israeli Jews. His government isolated itself to vote against a Palestinian state in the U.N. He helped Israel deal with the crisis at the embassy in Cairo; insisted on maintaining massive foreign aid to Israel at the toughest of times. It is painful to think that the vague suspicion is linked vaguely to his middle name; but surely the strong show of friendship on the first day of Obama’s visit is likely to yield some changes in the next numbers we’ll see.

Correction appended: 40 percent of Israelis are opposed to the “whole package” plan, not 50%.