facebook twitter email link
Some of you may have noticed the drama surrounding an ad that first appeared last month in several New York City subway stations that looks like this: 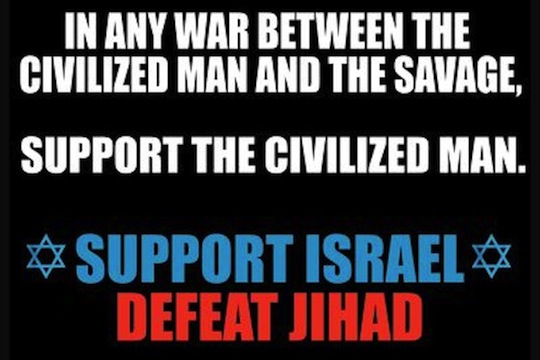 Sponsored by the fanatic, Islamophobic, hate-mongering American Freedom Defense Initiative headed by Pamela Geller, the ads were initially rejected for being incendiary. But the AFDI sued on First Amendement grounds and won in a federal court, so the ads went up. The question of where the limits of free speech should be drawn is an interesting and important one – but what I’m consumed with is how this ad is being described in the media.
I get a google alert for the phrase “pro-Israel” so I have literally seen hundreds of articles in past weeks about it that use this adjective.  I guess it is logical enough since the ad includes the words “support Israel.” But have any of the reporters thought about what the ad or its creators actually have to do with Israel? What about it actually makes it “pro-Israel”? And what the hell does that mean anyway? Wouldn’t it make more sense to just call it what it is: belligerent anti-Muslim hate speech ad?

As I wrote about here six months ago when the ads were initially rejected, what disturbs and enrages me about this ad (as much as its content) is the fact that AFDI is using and leveraging Israel for its own hate-mongering and internal American political battles – when their agenda really has nothing to do with Israel or the well-being of anyone who lives under Israeli sovereignty.

However, the fact that it can even get away with being called “pro-Israel” in the first place is entirely the fault of the Israeli government and the self proclaimed “pro-Israel” lobby AIPAC, since they have both been actively and passively allowing and at times promoting anti-Arab and anti-Islam sentiments to be equated with being “pro-Israel.”  To the Anti-Defamation League’s credit, they have insisted that “pro-Israel” does not mean “anti-Muslim.”

So I just wanted to thank both the Israeli government and AIPAC for giving Israel such a great reputation, and tell all journalists reporting about this to think twice before describing this disgusting ad as “pro-Israel.” As far as I’m concerned it is irresponsible to use the term at all. Oh, and I also wanted to thank President Obama for taking part in this by being the most “pro-Israel” president we have ever seen.