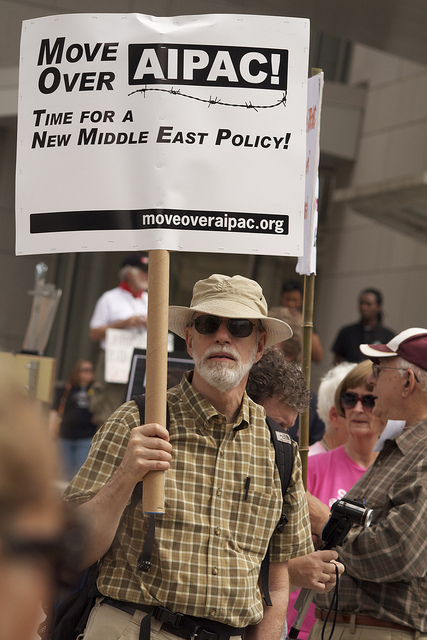 Demonstrations outside the center where the AIPAC convention took place (photo: flickr / mar is sea y)

WASHINGTON, D.C. – I have now covered five AIPAC conferences, but this admittedly was the first one where I was worried – genuinely – that the President of the United States would not get the applause that such a forum would naturally dictate. There were reports that the 10,000 delegates attending this year’s AIPAC received an email from the organization reminding them to behave appropriately in the presence of the American leader, which most did. On a number of occasions, they applauded – and even stood – to show their support and appreciation.

It was not clear this would be the case twenty-four hours earlier, or even twenty-four minutes earlier for that matter. The anecdote to prove it: clearly, Barack Obama was the intended headliner Sunday morning, but I instructed my cameraman to also film the speaker who preceded him, Democratic Minority Whip Steny Hoyer (a less interesting figure for the international television news outlet I am representing). I did so lest Obama not receive the same standing ovations enjoyed by Hoyer. This worry that something historic was about to happen was unprecedented.

In the theory, a prominent democrat – particularly the US President – should walk into a convention center filled with American Jews with some ease … but not Barack Obama. As has been well reported, just days before addressing the annual gathering – something the White House only confirmed he would do early last week – Obama riled many feathers by using his foreign policy speech to state his position on Israeli-Palestinian negotiations. Speaking before the group on Sunday, Obama then criticized the international media – and essentially the Israelis – for giving what he called “the lion’s share of attention” to his reference to the 1967 lines. He used AIPAC’s podium to clarify exactly what he meant. “I said that the United States believes that negotiations should result in two states, with permanent Palestinian borders with Israel, Jordan, and Egypt, and permanent Israeli borders with Palestine,” Obama explained. “The borders of Israel and Palestine should be based on the 1967 lines with mutually agreed swaps — (applause) — so that secure and recognized borders are established for both states.”

Obama, of course, is seeking re-election in 2012 … so speaking at venues like this is key.  American Jews, though small in numbers (some 2% of the U.S. population), make-up a significant donor base. And while most vote for Democrats, a growing number are tending to slide to the political right on two issues – the economy and Israel.

Immediately afterwards, I spoke to some of the delegates and asked him what they thought about his speech. Burton and Marsha Henry travelled from the New Jersey to attend their first-ever policy conference. In 2008, she voted for Obama, he did not. But despite her ballot choice three years ago, Marsha admits there was tension in the convention center hall when the President entered. “I think we were all not sure, not certain what Obama was going to say,” said Marsha Henry, “and if he was going to satisfy some of our questions and concerns.” Husband Burton Henry adds, “I was fairly annoyed by what was reported in the press, and I thought he did a fairly good job of explaining it. I felt better about it.”

Also watching, and then commenting, was Israeli opposition leader Tzipi Livni. During Obama’s speech, she was seated in the first row.  Within minutes of his last words, she was in the back of the hall on the media risers speaking live to Israel’s cable news channels. “There’s just one thing Israelis and the Prime Minister must remember,” Livni told Israeli Channel 10 News. “As more time passes, our position becomes weaker on a number of things which are on the table, which we could convince others of. And thus today, as we enter the negotiating room, to my regret, Israel is having to pay a price that in the past was not demanded of us.”  Livni, of course, has a constant eye on Prime Minister Benjamin Netanyahu’s job, and she is thought to be favored over him among Obama aides. Thus, her presence at the event was to be expected.  But one could not help but find the move – and publicity – a bit politically slimy.

As they do every year, outside the convention center, some 100 demonstrators gathered to protest their frustrations with Washington’s backing of Israel. They mostly held signs and re-enacted scenes they have seen or imagined from the West Bank. At one time, a small group of them – including some anti-AIPAC Jews – entered the pre-security perimeters doors of the convention center and began dancing a hora. (They were quickly sacked by a number of federal police.)

Small in size but clear in message, the protesters managed to annoy many AIPAC delegates, some of whom stopped to engage in banter. Overhearing some of the discussions was painful and a reminder of how American Jews (and their evangelical Christian counterparts, also in attendance) are ill-prepared in verbally defending the positions they like to promote. There’s a reason: few have their own experiences and answers. Most are repeating the terminology they heard at previous AIPACs or their local synagogue or on a Birthright trip. When asked about human rights abuses, humiliation and check points in the West Bank, they responded with talking-points about “rockets being fired by Hamas.”

Still, at least one of the protesters thought these exchanges are invaluable. “We have to collaborate,” said Liz Hourican, a member of Code Pink who crossed the country to demonstrate, and admits she supports both Israel and Palestine. “We have to live on this planet as one human race. And every bit of this protesting makes a difference. Obama and Bibi Netanyahu…they heard us today.”

The stage is now set for the Israeli Prime Minister. By the time Benjamin Netanyahu takes to the podium behind me on Monday night local time, the U.S. President and Secretary of State will be well into their trip to Europe. Netanyahu, of course, is likely to face a very enthusiastic crowd, with very little convincing to do among AIPAC delegates. But given the recent days of tension between him and the President, he knows the world will likely be watching, and this may be his golden opportunity to shine.

One must wonder if the verbal warfare witnessed over the past week was not just a well-crafted political stunt to ensure that while the Washington Press corps is off in Europe with the President, a few media outlets don’t leave a few around to listen to Bibi as well.