Even as the two leaders reveal their differences, the White House continues to oppose both the Fatah-Hamas reconciliation and the Palestinian Authority’s moves at the UN – without getting anything from Jerusalem in return 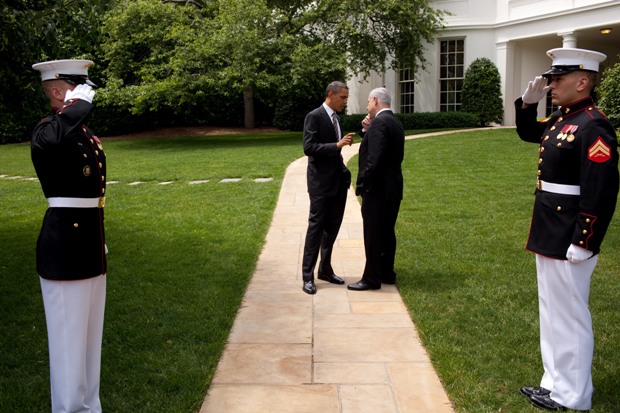 UPDATE: I reevaluated some of the issues discussed in this post. Check out my new post here.

Daily papers are not printed in Israel on Saturdays – weekend editions are distributed on Fridays, and the political commentary pieces go to press on Thursday afternoons. U.S. President Barack Obama gave his speech on the Middle East on Thursday evening, and throughout the week, Prime Minister Benjamin Netanyahu’s people insisted, both on and off the record, that the speech not be too hard on Jerusalem. The new national security advisor, Yaakov Amidror, actually denied a story on Yedioth Ahronoth reporting his knowledge that President Obama would mention the pre-1967 borders in his remarks, claiming that “the only correct thing in this piece was my and the former NSA’s name.”

Well, Obama did mention borders, and Netanyahu made some harsh comments on Thursday night, declaring that he “expects to hear a reaffirmation from President Obama of U.S. commitments made to Israel in 2004.” So it happened that while the newspapers’ weekend political sections and op-ed pages reflected a somewhat smooth ride for Netanyahu in Washington, the front pages told the story of a new rift between the American president and the Israeli prime minister.

The confrontation couldn’t have been clearer after the White House meeting between the two leaders. Netanyahu even went so far as declaring his opposition to the president’s positions to his face – before lecturing him on Jewish history and Middle East politics. There wasn’t even an attempt made to disguise their differences and mutual mistrust.

Netanyahu’s problem is not so much with the White House, which already made it clear that it would not support a Palestinian unilateral declaration of independence. In recent weeks, Israel launched a diplomatic counter attack, aimed at bringing as many European countries as possible to vote against the Palestinian initiative at the United Nations in September. But when the U.S. administration publicly confronts Netanyahu, more countries are likely to go a step further and take diplomatic initiatives that support the Palestinians. In the past, anonymous proxies to Netanyahu told the Israeli press that they suspect the White House is behind some such moves on the part of the Europeans. Similar theories are now likely to reemerge, and perhaps we will even see a return to the rhetoric of “Obama as Pharaoh,” which was sounded by government ministers in the months after the elections.

Netanyahu’s harsh response to the president – both in his Thursday statement and in his comments after the White House meeting – suggests that he intends to maximize the political capital such a confrontation might bring him with his base. So far, the diplomatic deadlock and the growing isolation of Israel have not hurt Netanyahu with the public, and according to recent polls, if elections were held today, their results would be pretty similar to the previous ones. If, on the other hand, the prime minister were to embark on a serious peace initiative, his coalition is likely to collapse. Netanyahu knows that, and he is unlikely to agree to any concessions before November 2013, when new elections are scheduled. The problem is that even those elections could result in the same coalition and political pattern.

I must admit that the logic behind the U.S. administration’s move is not entirely clear to me. There is no hope of launching meaningful negotiations anytime soon. Even if the president can somehow get Netanyahu and Abbas into the same room – a very unlikely scenario, given the political circumstances on both sides and the proximity of elections – one can say with some certainty that nothing would come of it.

At the same time, the White House opposes both the Fatah-Hamas reconciliation and the Palestinian Authority’s moves at the UN, and might even to do some work behind the scenes in support of Israel’s positions on these issues – without getting anything from Jerusalem in return. In fact, a substantial opposition to the Palestinian UN effort is likely to strengthen Netanyahu at home, and could even secure his re-election. Does the administration hope that by confronting both sides we might achieve a breakthrough before September? I find it hard to believe. PM Netanyahu made it clear he will never allow a real Palestinian state, so it’s time to look for new paths to end the occupation.

The solution, I believe, lies the in recognition of the Palestinians’ right to oppose the occupation through diplomacy, as well as in support of growing non-violent protests and in respect for their political choices. This road might take longer to achieve results, but the alternative could be a recipe for the renewal of violence, once the current path leads to its inevitable dead end.