The president gets a second chance to challenge the status quo on the Palestinian issue. But will his personal dislike for Netanyahu translate to effective pressure on Israel? I wouldn’t bet on it. 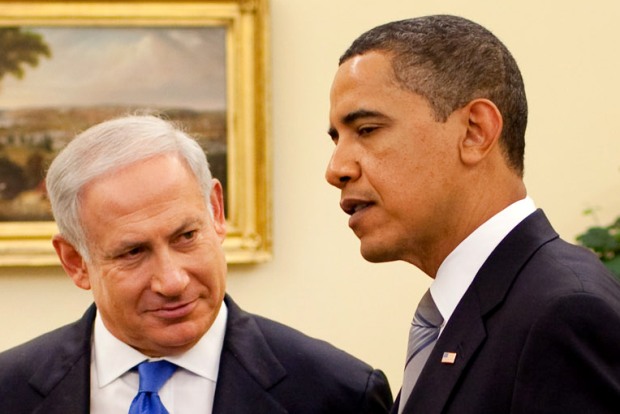 President Barack Obama and Prime Minister Benjamin Netanyahu in the Oval Office in 2009. Yes, you will have to meet again. (Official White House Photo by Pete Souza)

1. Israel was mentioned 34 times in the final presidential debate, and in the end, it didn’t matter. The Republican strategy in the last four years – going after the White House for “throwing Israel under the bus” – did not hurt Jewish support for the president. According to exit polls, Obama got 70 percent of Jewish votes, a slight decrease from 2008, overall matching the votes he lost with the general public.

There are two possible explanations for the failure: either Jews don’t think about Israel when they cast their ballots, or they didn’t buy the GOP’s story. My guess is more the former than the latter.

2. I wouldn’t hold my breath waiting for Republicans to rethink their alliance with the Israeli hard right. These relations are so deep and strong that they will survive such a hiccup. The GOP and the Likud – the Republikud party – share common values and an ideology which despises human rights, turns its back to the international community and approaches politics with a monolithic and often Islamophobic worldview. The blow this camp and its ideology has suffered is in and of itself a good thing, but there are many battles ahead. So far, the Democrats have allowed the GOP to shape this conversation and have even contributed to the “who is more pro-Israel” contest. Maybe it’s time they stop.

3. In his first term, Obama’s Mideast policy was a complete disaster. The president began by promising not to turn his back to the Palestinians, than tried to confront Israel on the issue of settlements with an empty gun. The last couple of years were embarrassing: not only did the United States fail to reach its own policy goals, the administration ended up vetoing a UN Security Council resolution on the settlements, which used the language found in the State Department’s press releases on the issue.

Will the second term be different? It’s hard to tell. Chances are that it won’t. I think the White House has realized that the Israeli-Palestinian issue costs a lot of political capital, but brings very little results. Furthermore, the administration continues to believe in the Oslo framework, as if two decades haven’t passed. The Palestinian Authority hardly represents anyone these days, the government in Jerusalem is anxious to renew negotiations for the sake of negotiations, and the whole thing is clearly leading nowhere. The only way the White House can move things forward is by confronting the Israeli desire to maintain the current status quo. The undeniable dislike of Benjamin Netanyahu by many in American government will not bring about this change on its own.

A good sign of the president’s intentions could be the people he chooses to appoint to deal with Israel and the Middle East. The first envoy, George Mitchell, didn’t enjoy full support from the administration. He was then replaced with Dennis Ross, who played the role of “Israel’s lawyer” in previous rounds of negotiations, and seems to have been appointed to win back the hearts of Jewish donors and supporters, rather then to end the occupation. Since he left, no high profile figure has dealt with the Palestinian issue. Meanwhile, the Palestinian Authority is planning to go ahead with its UN statehood bid in coming days. It’s a symbolic act, but like the previous round, it will force the administration to take a stand, thus revealing some of its intentions for this term.

4. One sure loser of these elections is Sheldon Adelson. It’s not just the millions he spent on Newt Gingrich and then Romney. Adelson has become a public figure, and a very controversial one, even in Israel. He got nothing for his investment, only bad press.

4. Israelis will hold their elections on January 22. Until now, all polls indicated a Netanyahu victory. Some people, also those within the political system, believe that the U.S. elections can affect Israeli voters, and probably swing a few seats away from the prime mister. I seriously doubt this. Netanyahu would have gained some momentum if Romney had won, and the media would have congratulated him for “picking the right horse.” But Netanyahu had survived the first four years of an Obama presidency, and he can live with another term. Netanyahu might actually sell – at least to the right – the line that only he can guard Israeli interests now that we don’t have a genuine supporter in the White House.

The outcome of the U.S. elections is said to encourage former Prime Minister Ehud Olmert to join the local race, but Olmert is yet to reach a final decision, and he has no chance of beating Netanayhu in any case. The GOP suffered some losses tonight, but it will keep the seat in Jerusalem.

UPDATE: Yossi Verter in Haaretz this morning: “If Obama chooses to interfere with Israeli elections, nobody could blame him.” Regarding Adelson, “he made the wrong bet too. You could expect better from someone who made his fortune in gambling.” Ouch.

Click here for more +972 coverage on the U.S. election

Related:
Obama wins election, takes Jewish vote with him
U.S. elections: The majority voting on the rights of the minority
Just today, forget about the Middle East and vote Obama
‘Pro-Israel’ figures who rebuked Obama now endorse him for president