Protesters taking part in the #J14 march last night couldn’t help noticing a large army vehicle near the route of the protest, on the corner of Ibn Gvirol and Frishman streets (basically under my house). The car, nicknamed Raccoon, is a modified Hummer with special surveillance equipment. It is often used in the occupied territories against unarmed Palestinian protesters (you can see it used in army training in this link). 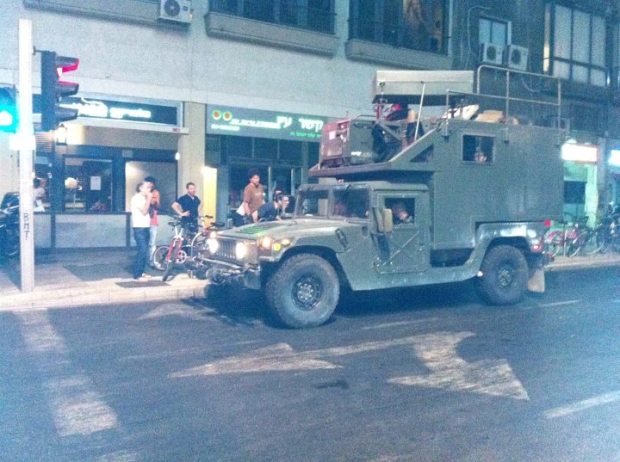 Update: Before reaching the corner of Rabin square, where this picture was taken, the vehicle waited opposite the Defense Ministry on Kaplan St., accompanied the march to Azrieli junction, and only then reunited with the procession at Ibn Gvirol.

Bystanders and families tried to peep inside the military car, in what seemed like a sign of days to come in Israel – more evidence that the occupation does not end with the Green Line. If there is no democracy in Ramallah and Nablus, there will be none in Tel Aviv. 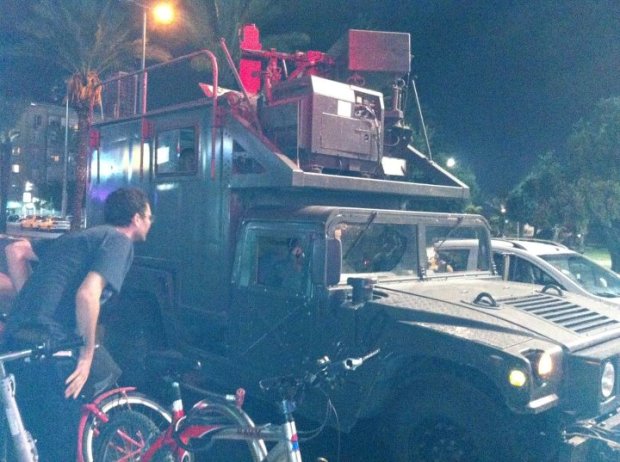 STALKER is the ideal choice for a multi-mission response, whether as a completely autonomous forward observer or integral part of the maneuvering force.

STALKER can be mounted on a variety of vehicles, in a flexible mounting configuration, for a wide range of scenarios ranging from open country to rugged mountainous terrain and urban environments.

· Operable by only three crew members
· Very short (few minutes) deployment and retraction time
· High-accuracy target coordinate finding and display on assortment of
· RADAR/EOS handshake for EOS slewing to target and closure of sensor-to-shooter loop via Stalker’s C2
· Integral battle planning, scenario recording and After-Action Review capabilities
· Programmable automatic search capability
· Independent operation of RADAR and EOS
· Can be integrated on a wide variety of vehicles
Stalker Family systems can be configured for military as well as homeland security applications

Update II: A military spokesperson told the site mako.co.il that the Raccoon didn’t belong to the army, but to the Border Police, a quasi-military unit under the command of the Israel Police, deployed mostly in the West Bank, but which also carries out missions west of the Green Line. The police refused to comment on the deployment of  the surveillance vehicle inside Tel Aviv.

I have changed the headline of  the post to reflect this new information.

Update III: MK Zehava Galon from Meretz wrote on her Facebook wall: “Those criticizing the police for deploying a surveillance car in the demostration yesterday don’t understand the achievement here – it’s the first time the government is listening to the protest!”