After 50 years of diplomatic relations, the Israeli-German partnership is strained by mounting German dismay over Israel’s settlement policy and reinvigorated anti-Semitism in Germany. 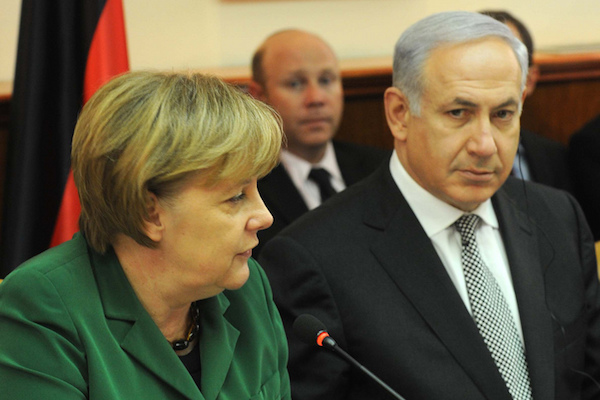 Israel and Germany are marking 50 years of diplomatic relations this week. While most people probably aren’t reeling with excitement in anticipation of the countless festivities (especially on the German side) to mark the occasion, the anniversary does serve as a good occasion to take stock of the relationship between these two countries.

Can Israeli-German relations ever be normal? Should they, after the Holocaust? Is Israel more entitled to German support than other nations? Or is this a poisoned chalice no side should lobby for? And where do the Palestinians stand in that equation?

German Chancellor Willy Brandt once described the relations between Israel and Germany as, “normal relations [that] are very special in nature.” A few decades later, I believe his words still ring true. And yet they mean something different today.

Fifty years after David Ben-Gurion and Konrad Adenauer forged an unlikely partnership, Israel and Germany are partners with strong ties in economy, science, culture, sports, and of course, politics. Not only are diplomatic ties strong between the two countries, there is also deep and broad cooperation between the two civil societies.

Probably most controversially, Germany is a major supplier and funder of Israeli arms, subsidizing up to 50 percent of the costs (for example with the Dolphin-class submarines) of armaments, including the subsidized sale of new warships announced this week. Israel’s security was and still is an essential part of the German Staatsraison, and no German politician has ever grown tired of saying as much.

But in recent years, Germany and Israel’s interpretations of what this cornerstone of foreign policy means and how it should be interpreted in day-to-day politics have drifted apart. Germany is taking baby steps toward being more outspoken about the Israeli occupation, and that is increasingly straining its relationship with Israel (see timeline).

Nevertheless, Khalil Shikaki from the Palestinian Center for Policy and Survey Research in Ramallah thinks Germany could support the Palestinians much more, even without hurting its relations with Israel.

“Palestinians want much stronger economic relations with Germany, which is also something Israel should support,” he told me.

Shikaki recently directed a public opinion survey asking Palestinians about their views on Germany. Most Palestinians like Germany as country, but not its foreign policy, the study found.

“Palestinians still believe Germany is biased towards Israel and shies away from sincere criticism in order not to hurt the special relations with Israel,“ he said. “There is no doubt in my opinion that the Palestinians suffer from the consequences of the Holocaust,“ Shikaki added — a view widely rejected in Germany.

While he recognizes Germany’s contribution in nation-building and rebuilding Gaza, Shikaki argues that Germany does not take any effective steps against Israeli settlement policy in the West Bank. “This indirect support for the continuation of the occupation is the problem, not the German submarines.“

Mohammed Dajani Daoudi is a Palestinian scientist, peace activist and founder of Wasatia who lobbies for interfaith reconciliation. Unlike Shikaki, he sees Germany’s foreign policy as more balanced than ever before. “I see a big possibility for Germany as an ‘honest broker’ in the Israeli-Palestinian conflict since it has good relations with both.” The real question, he adds, is whether Israelis and Palestinians truly want to reconcile.

The new German audacity has not gone unnoticed on the Israeli side, either. “Under Chancellor Merkel and her government, Germany has become much more outspoken about the Israeli-Palestinian conflict,” explains Shimon Stein, former Israeli ambassador to Germany.

“The German expectations about Israel making progress in the conflict haven’t been met and they express that.” Provoking Israel’s dismay is a risk German officials are willing to take, according to Stein. “Israel needs Germany more than Germany needs Israel right now.“

Public opinion polls indeed show widespread German disillusionment over Israel’s treatment of its Palestinian neighbors, a notion shared by Stein. “To Germans, the Palestinians now hold the role of the victim, not the Israeli people who are seen as the aggressors.”

Ambassador Stein sees German Mideast policy trapped in a situation he describes as a zero-sum-game between Israeli and Palestinian interests: “You sympathize with one [side] and offend the other.“

But it’s not just the situation in the Middle East itself has become a mainstay of the Israeli-German agenda: Jewish life in Germany is another important issue that comes into focus at the 50th anniversary of diplomatic relations. And in this regard as well, the status quo isn’t as cheery as the organizers of the countless anniversary ceremonies had hoped — even though stories of a huge Israeli influx to Berlin still dominate the headlines.

Just this year, Josef Schuster, president of the influential Central Council of Jews in Germany, made headlines when he advised German Jews not to wear yarmulkes in German Muslim quarters. His organization traditionally serves as a cautionary voice in Germany’s public sphere.

Since the recent attacks in Paris and Copenhagen, the problem of anti-Semitism in Western democracies like France, Denmark and also Germany indeed has become a hot topic again. And it’s not just media hype, Schuster insists. “Unfortunately, an aggressive, anti-Israel atmosphere prevails in Germany. Often, this plainly translates to anti-Semitism.”

Angela Gruber, 26, is a German journalist, blogger and former intern at +972 Magazine. She was a scholar for the “trialog of cultures” scholarship of the German Quandt foundation and reports from and about Israel. Follow her on Twitter: @netzkolumnistin.