As the world’s eyes are turned to Syria and its alleged use of chemical weapons, some of the most renowned human rights offenders gathered in London to trade in weapons. Activists of all stripes held a week-long protest against the fair, which included speeches and direct actions. Here is a wrap-up of the week’s events. 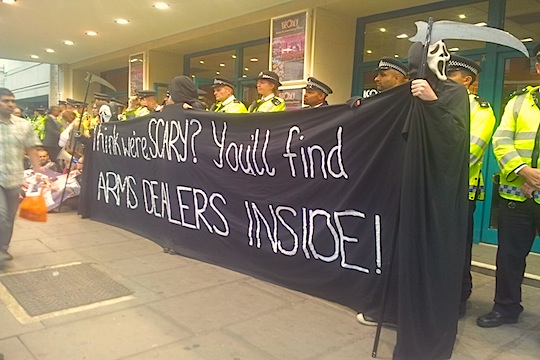 Since Sunday afternoon, activists have been protesting and occupying the public space outside London’s ExCeL Centre which has been playing host to the Defence Security and Equipment International (DSEI) arms fair.

DSEI is self proclaimed to be the biggest international arms fair in the world, hosting more than 1,400 international exhibitors. As the world’s eyes are turned to Syria and its alleged use of chemical weapons, some of the world’s most renowned human rights offenders gathered in London to trade in weapons. Buyers at DSEI include 14 states identified as authoritarian regimes, and nine defined by the British Foreign Ministry as countries with “the most serious wide ranging human rights concerns.” Sellers included companies such as BAE – the third largest global arms producer, provider of a vast amount of warfare technology used by the American military in Afghanistan and Iraq, and recent trader with Saudi Arabia – while JCB and Caterpillar (manufacturers of bulldozers used by Israel for house demolition in the West Bank) were also represented. Several other Israeli companies such as Rafael, SIBAT-Israel Ministry of Defense and Elbit also participated.

In opposition to this extravagant show of death, a coalition of British organizations including the Campaign Against Arms Trade, Occupy London, and War on Want called for a week of protest, which began on Sunday morning with a Critical Mass bike-riding protest.

According to Jessica, one of the organizers of Disarm DSEI, “DSEI is the world’s biggest arms fair and should be a natural focus for the anti-militarist movement, or just anyone with a conscience. DSEI promotes indiscriminate weapon sales around the world and this year, as in the past, exhibitors have been exposed as promoters of illegal torture equipment. Arms fairs like these need to be met with growing resistance.”

Following the ride, several hundreds of protestors gathered by the ExCeL Centre. Tents were hoisted on the roundabout leading to one of the main entrances of the fair, and protestors marched and biked in circles, holding signs reading “Tear gas kills,” “Wars are good for business,” “Arms traders here today, this is not okay.”

A set of formal speeches, including by a Green Party MP, a former ANC South African parliament member and a Bahraini refugee, was followed with an open stage with poetry reading, spoken word, and a one-woman show, which told the story of the training of a female pilot in Afghanistan. All of this took place on the road, disrupting the traffic into the fair. 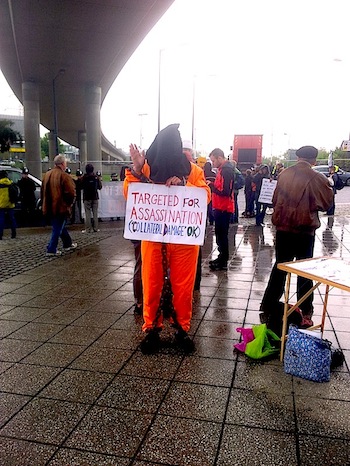 A protester at the DSEI arms fair in London. (photo: Leehee Rothschild)

The scene was colorful and creative. Children and adults alike painted both the roundabout and the road with anti-war slogans. Others, decorated the area with tents. Several groups rewrote a popular song with anti-DSEI lyrics, and a YMCA version was enacted in front of a ship-bearing truck.

As the police called on protestors to disperse, a massive “die-in” took place, and most people present pretended to drop dead to the ground. The die-in ended abruptly after a short and intense rain pour which managed to raise the dead, and clear the road for a short while.

While this was taking place, two smaller groups of activists used metal tubes to lock themselves on to the two main road gates leading to the center. While the police managed to remove and arrest 19, the arrestees were able to halt movement into the centre.

Protests continued on Monday, as DSEI hosted a conference on “unmanned warfare,” leading activists to hold a demonstration under the banner of “Say No to the Game of Drones.” With a good turnout for a weekday morning, the protest against the conference continued into a general protest against DSEI, involving the blockade of a truck-carrying ship, as well as maintaining a large presence at the protest area throughout the afternoon. A candlelit vigil organized by the Quakers for Peace group concluded the second day of protest.

Thursday saw a demonstration outside Parliament, another critical mass in the evening, along with a protest outside the celebratory dinner for the arm companies under the slogan “Don’t Let Them Dine in Peace.” While the protestors could not have hoped to prevent DSEI from taking place, they certainly succeeded in making their criticism loud and heard.

“This year’s build-up to DSEI has been particularly inspiring as so many very different groups have worked and organized together,” says Jessica. “As a result there have been daily actions during the week, using a diversity of tactics. This is something we can build on.”