When hundreds block Tel Aviv’s main boulevard, chasing away the police, the mass media isn’t there to document it, explaining that now is “The Gilad Schalit festival” 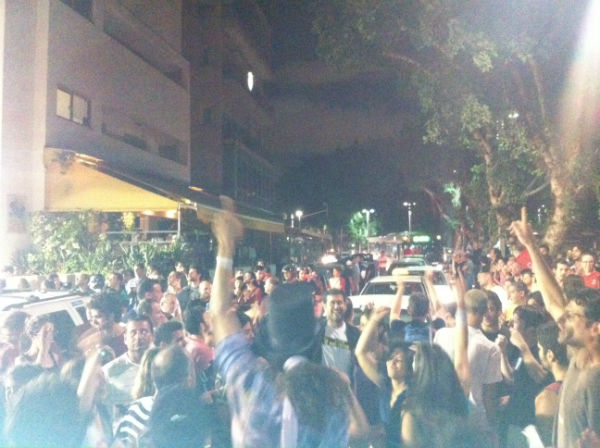 It didn’t look as though anything majorly exciting was due to happen in Tel Aviv on the “Global Day of Action”. Two events were indeed planned, but with the tents folded and the spirit of revolution calmed over the past month or so, no one expected mayhem.

The first was a gathering on the Art Museum plaza, featuring live streaming and global chat, which was approved by both the police and the city, although the latter refused to supply it with electricity.The result felt like a dimly-lit trade fair, where activists created debate circles amidst stalls erected by the Kabbala center and other not fully relevant organizations, all confined by blue metal barriers put up by the city. Having said that, Noa Yachot’s camera produced a couple of striking images there.

The second event planned was to be a dance party on Rothschild Boulevard, which only a month ago was still paved with the tents of the J14 movement seeking social justice. Tel-Aviv’s mayor Ron Huldai, who ordered the removal of the tents, appealed to the police and had the permit for the event annulled.

Despite the loss of the permit, hundreds gathered on the boulevard at the set time, 10:00 PM, underneath the newly created “People’s House,” a grassroots cultural center. The DJ was inside, but fine music reached the street. Soon dancers poured from the middle stretch of the boulevard, dedicated to pedestrians and bikes, to the road itself. The police, watching peacefully from the sidelines, got involved and pushed protesters back onto the sidewalk.

They then attempted a first arrest, walking into the “People’s House” and seeking one of its chief coordinators. The man they were after fled down the stairs and rushed down the street, followed by both police and revelers. The civilians pushed forth of the police lines, allowing the escaping man to vanish among them and disappear. They then proceeded to steal the ignition key of the police vehicle.

Several police officers stood stranded in the midst of hundreds of singing men and women, who chanted slogans of anger at Netanyahu’s government, at Mayor Huldai and at the tycoons running Israel’s economy, but also: “Mr. Policeman, you too deserve more.” Finally the police decided to back up the vehicle manually and roll it off the boulevard. Protesters followed them, singing. No arrests were made. Two protesters held by police were released and the rest were left in the middle of the street with no one to interfere.

With the police gone, the crowd proceeded to dance, singing “Hava Nagila”. The tent struggle, which died down thanks to elaborate media spins and diversions, seemed to have been reignited. The dances grew more and more elaborate, culminating in a folk dance taught to Israeli preschool kids. Everybody sang along: “We have a billy-goat / the billy goat has a goatee / and also four legs / and a little tail.” 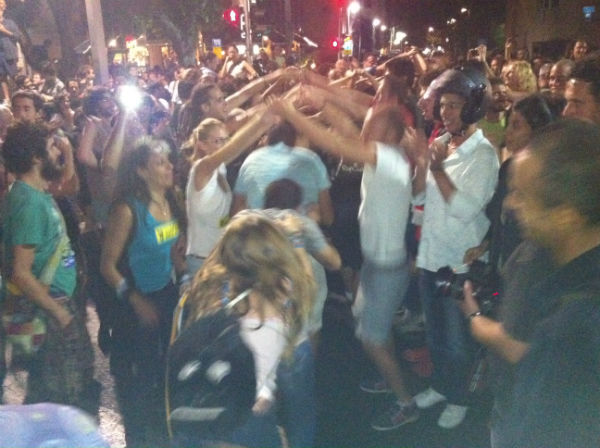 Outside Huldai’s blue metal barriers, fueled by music and with the only violence shown by the police, the struggle came into its own. One thing was missing, however. Tel Aviv’s main street was blocked for nearly two hours and no television camera was there to document it. The various news websites ignored the event altogether. When I approached a reporter for a major TV channel, texting him that they should send a crew over, he replied: “I’m all in favor, but for the next half a year we’re going to be all about the Schalit festival.”

The struggle makes an attempt to rise anew, despite animosity from the mayor and the use of Gilad Schalit’s release as yet another media spin. Socially conscious Israelis will need all the global help they can get.