The Headlines: The “Jewish state” demand strikes back 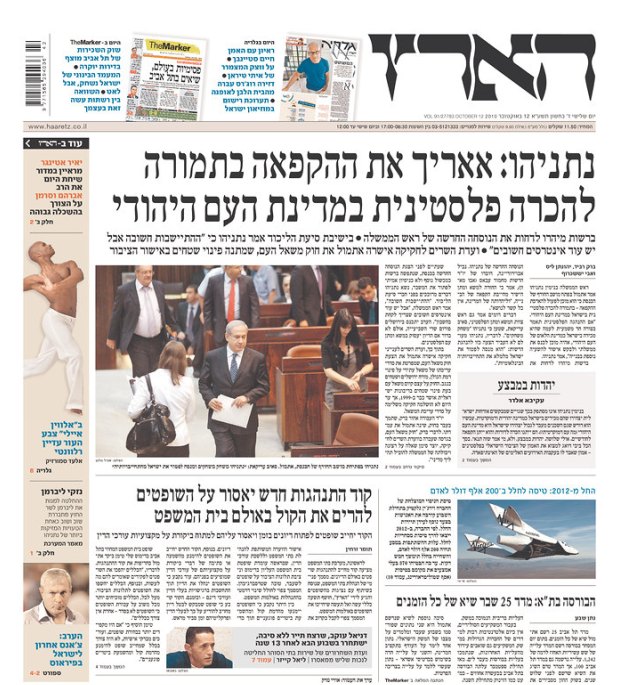 > Netanyahu offered the Palestinians an extension of the settlement freeze in return for recognizing Israel as the nation state of the Jewish people. Didn’t he offer them citizenship in return for the same thing, just the other day? It seems like yesterday’s bargain was better. The newspapers cover this as a cheap stunt, but give more weight to Netanyahu’s comments emphasizing that the settlements are important, but also that “there are other interests to consider”.

> Opposition party Kadima, in a counter-stunt, wants [Heb] to enshrine the Declaration of Independence in basic (constitutional) law. This is supposed to embarrass the coalition, which might have to oppose the bill, due to strong resistance from the ultra-orthodox parties . It could backfire, though: it is not as if Kadima, when it was in power, complied with the declaration’s principles.

> A new code of conduct will instruct judges to behave politely in court.

The Sidelines: Lieberman Strikes Back

> Foreign Minister Lieberman (Yisrael Beitenu) continues attacking the Europeans, claiming that Israel should not grovel before foreign nations, and claiming that Europeans are hypocrites for criticizing Israel, because of laws they passed against Muslim minarets and headscarves.

> A national-religious rabbi explains his criticism of academic education.

> A prominent advocate of LGBT rights is a candidate for judgeship.

> A policeman kidnapped and threatened to kill a woman who refused to marry him (Yedioth).

> Prosecutors decided to save money on expensive genetic tests in a rape trial, but now, faced with possible acquittal, have changed their minds (Yedioth).

> Defense Minister Barak (Labor) opposes a law, setting procedures for a plebiscite over a decision to withdraw from territories annexed to Israel (including the Golan heights and East Jerusalem, but excluding the West Bank), after having voted for it in the past. His bumbling behavior overshadowed a Labor party meeting, which raised the possibility of leaving the coalition, but not right now.

> The Knesset’s children rights committee discussed Palestinian children who throw stones in East Jerusalem. Despite sharp exchange between Arab and Jewish members, all agreed that children should not be involved in violence (Yedioth).

> Abdualla Abu-Rahme, one of the leaders of the Palestinian non-violent movement, has been sentenced to one year in prison and over 1,000$ in fines.

> The Dutch conglomerate Unilever will move a factory in a settlement inside Israel: one reaction to a global campaign boycotting companies involved in the occupation (Ma’ariv Asakim).

> A settler wins compensation in court from a Bedouin policeman that assaulted him during the violent eviction of nine homes in an illegal outpost (Yedioth, 24 Hours).

> Settlers build a 20-foot watchtower in preparation to oppose the IDF evacuation of an illegal outpost built on private Palestinian land (Yedioth).

> Ha’aretz columnist claims that if the parties will not reach an agreement on borders, the Obama administration will make its own offer for a Palestinian state on 95% of the West Bank, with equivalent land from Israel in compensation for the rest.

> The Israeli Foreign Ministry believes [Heb] Palestinian Prime Minister Fayyad is laying the groundwork for a unilateral declaration of independence in one year’s time.

> A political scientist compares the Palestinian governments in the West Bank and Gaza.

> The Palestinians want [Heb] to build a national airport in Jericho, waiting for Israel’s approval.

> Hamas, in breach of international law, still refuses [Heb] to allow any contact with Gilad Shalit, an Israeli soldier held hostage in Gaza for four years.

> Freedom of Information and transparency [Heb] are more, not less important in security matters: they have the potential to prevent wars.

> The Bank of Israel is considering hardening mortgage in an effort to prick a real estate bubble (Yedioth, Mamon). Knesset members pressure the government to take action, some suggest it should build 100,000 new apartments (Ma’ariv, Asakim).

> Widows will lose their benefits if they live with a new life partner (Yedioth, Mamon).

> Workers in a large chemicals firm are threatening to strike, fearing for their jobs after reports the company will be purchased by a Chinese corporation.

> Opposition Knesset members propose [Heb] a bill to create a clearer immigration policy for Israel, including a pledge for new citizens that does not include an explicit recognition of a Jewish state. The proposed bill also includes criteria for awarding refugee status to asylum seekers (so far, less than a 100 people have been awarded this status in Israel’s sixty years of existence).

> The Association for Civil Rights in Israel wants [Heb] the government to clarify that it is not debating the forced transfer of Israeli Arabs to a future Palestinian state. This follows a security forces drill in which such scenarios were practiced.