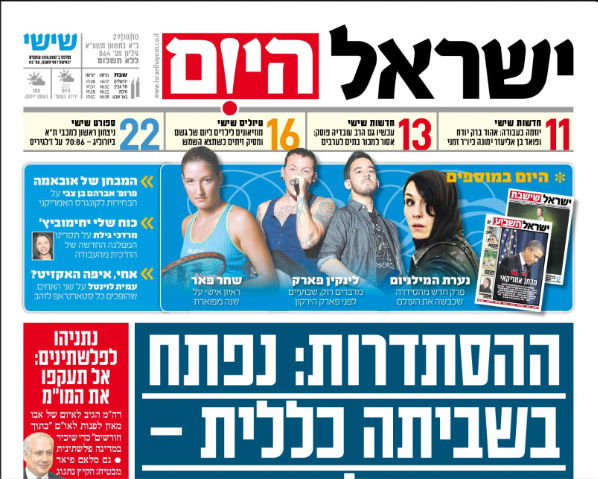 > Palestinian President Abbas has raised the possibility of asking the UN Security Council to recognize a Palestinian state, if negotiations with Israel are stalled. In response, Netanyahu called for avoiding unilateral moves. He did not mean to include, of course, settlement construction that changes facts on the ground. Two prominent Jewish Americans, considered close to Obama, visited [Heb] Israel and the Palestinian Authority, and urged Netanyahu to proceed with negotiations. In the background, the administration is increasingly frustrated by Israel’s policy.

> The German mediator, working on a deal between Hamas and Israel to secure the release of kidnapped IDF soldier Gilad Shalit in exchange for Palestinian detainees, is accusing Netanyahu of bringing the negotiations to a dead end (Yedioth).

> The Jerusalem municipality wants [Heb] to demolish a Palestinian protest tent in East Jerusalem, claiming it is a focal point for disturbances and stone-throwing.

> Palestinian children, who were heading to participate in a youth film festival in Tel Aviv, were delayed in the checkpoint for so long, over technical reasons, that they had to go back after missing almost the entire festival.

> UNESCO has called on Israel to remove from its list of “heritage sites”, the “Cave of Machpela” and “Rachel’s tomb”, ruling that these are also Muslim sites.

> The trade unions are threatening a general strike, beginning this Tuesday, if public sector pay is not raised by 10.5% over the next three years. Negotiations with the Finance Ministry are still continuing in an effort to avert the strike.

> Every weekend, the roundup brings you a summary of what the four newspapers’ major columnists have to say.

> It is an orphaned corner without Israel’s most important columnist, Nahum Barnea (Yedioth), apparently on holiday.

> Yossi Verter (Ha’aretz) thinks the Netanyahu government’s days are numbered. This explains the garage sale atmosphere which characterizes the current budget debate, with numerous protests and threats of strike. The controversy over benefits to Yeshiva students can be attributed to the incompetence of Netanyahu’s staff, but it also exposes divisions within Shas, between those who want to follow the uncompromising stance of the Ashkenazi ultra-orthodox, and those who want to appeal to the broader public. Verter brings contradictory reports from sources close to Foreign Minister Lieberman (Yisrael Beitenu). Some believe that Netanyahu wants to shake up the coalition, adding Kadima and dump his more right-wing partners, while others see this scenario as unlikely.

> Dan Margalit (Yisrael Hayom) reports [Heb] that even hawkish Jewish American leaders are warning Netanyahu about declining support in the US. Apparently, the obstacles to conversion and the loyalty oath idea go down badly over there. Margalit is also worried, at least on the former issue, detailing the lack of opposition to ultra-orthodox efforts to challenge even orthodox conversions. On the Palestinian issue, Margalit continues to believe in an interim settlement, of the kind peddled by former Defense Minister Mufaz (Kadima).

> Ben Caspit (Ma’ariv) argues that Netanyahu, encouraged by his wife, has already decided on another round of settlement “freeze”. But Caspit doubts he has the stomach for a comprehensive agreement with the Palestinians, even though it is politically feasible. Netanyahu is praying that the Attorney General will decide to indict Lieberman for corruption charges, thereby removing the greatest opponent of compromise in his current coalition. Considering the Prime Minister’s notorious weakness and disarray, Caspit suggests the only recourse might be an agreement enforced by the US. On the domestic front, Caspit has a piece of advice to the State Comptroller, investigating the attempt to derail the candidacy of the incoming Chief of Staff: don’t focus on that, but instead look into Barak’s feud against the outgoing Chief of Staff, Gabi Ashkenazi.

The Sidelines: Settlements vs. the World

> The US consulate in Jerusalem is tightening [Heb] its supervision of construction in the settlements. Over the past two years, they have managed to significantly constrain building in East Jerusalem, an unprecedented achievement. Even the settlers are now providing them with information, in an attempt to ensure their side will be heard by the US administration.

> The publisher, editor and other senior staffers in the New York Times visited the settlement, in a tour organized by the settler leadership.

> An op-ed makes an innovative suggestion: instead of fighting Palestinian efforts to pass a UN Security Council resolution recognizing an independent state, why not embrace it, and shape it according to Israel’s interests?

> A battalion commander, on trial for ordering a soldier to shoot at a handcuffed Palestinian detainee, is claiming that the video documenting his offence has been doctored. This is despite the fact that a forensic expert from the Israeli Police has ruled that the video is authentic (Ma’ariv).

> Labor MKs are hatching [Heb] a plan to depose Defense Minister Barak from his position as the party’s chairman.

> The ultra-orthodox and secular populations in Jerusalem continue to struggle [Heb] for control over once clearly secular neighborhoods.

> The government intends to allocate 45 million dollars as aid to the city of Lod, suffering from a serious crime wave. Both Arab and Jewish residents welcomed the plan, but expressed skepticism about the government’s long term commitment.

The Bottom Lines: Discrimination can Kill

> A report reveals [Heb] that Arab Israelis are much more likely to die or be injured in car accidents. Despite numbering less than 20% of the population, they account for 43% of fatalities over the last decade. 54% of children killed in road accidents were Arabs. The report recommends enforcement and raising awareness of parents. But there does not seem to be any mention of the fact that without childcare or playgrounds, Arab children have no place to play except in parking lots and near roads.

> Rabbi Ovadia Yosef, the spiritual leader of the Sephardic ultra-orthodox party Shas, has stated that Jews should not sell homes to Arabs.