A former editor of Israel’s flagship weekend television news program reflects on the challenge of presenting the October 2000 events — when Israeli police killed 13 unarmed Arab protesters — in a way Jewish Israelis might empathize with the pain of the country’s Palestinian population. 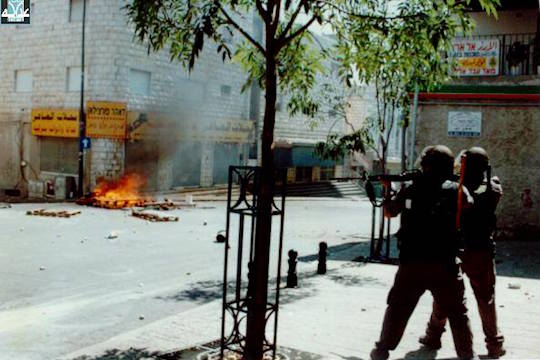 Israeli police officers shooting at Arab protesters in northern Israel during the protests of October 2000. (Courtesy of Adalah)

It was an intense meeting in a small room on the second floor of Channel 2 news in Tel Aviv. We tried to come up with the perfect mix of views to make Israeli Jews make sense of what would eventually come to be known as the “events of October 2000.” Back then I was an editor on Ulpan Shishi, which was and remains the channel’s flagship weekend news broadcast. It is a show that summarizes the events of the past week, and provides enough time to tell a story, analyze it, bring in interviewees, and go beyond.

Historically, the High Holiday month is considered fairly quiet when it comes to news. The summers are usually dead, and the Jewish holidays do not fare much better. That is why in the short period between the end of summer vacation and Rosh Hashana (Jewish New Year), news outlets go into hyperactive mode and prepare dozens of filler items for their holiday supplements.

But none of these harmless, personal interest stories were printed in Octover 2000. And it wasn’t the news that died, but rather 13 Arab citizens, one Jewish citizen, and a Druze Israeli soldier.

These were the pre-social media days, before Facebook and smartphones took over our lives and the way we consume news. The media was based on regular cellphones and pagers.

Even the internet was not, how should I put it, too sophisticated 15 years ago, such that the flow of news dependent entirely on the reporter’s ability to provide accurate, honest, fact-checked, and thorough information to the news desk. This was especially true on holidays when the desks functioned at lower capacity.

This is what was happening as we were thrust into the events of October 2000. No one expected the tsunami that hit nearly every corner of the country.

News studios were forced to go into emergency mode, complete never-ending live broadcasts. But the expectation was that Ulpan Shishi would, at least after the first wave, come away with some kind of summary. Some insight. 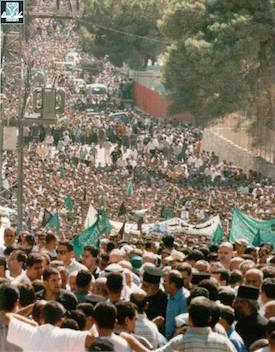 A demonstration in northern Israel during the events of October 2000. (Courtesy of Adalah)

We expect television to bring us a bit of depth alongside the hard news, analysis, interviews, explanations, and reports from the field. We want the one story that will turn people’s heads — the indisputable kind of story.

This is not an easy task, considering the fact that there is simply not enough man power during the holidays, not to mention the fact we received our news using poor technological means. But the task became even more formidable because the dead were Arabs who were killed while demonstrating. How do you create sympathy when the country’s main junctions are blocked due to violent clashes between Arab protesters and the police, a situation that prevented Jewish families from traveling during the holidays?

How do you give a humanizing angle to this kind of story? How does one find the right moment? The right person? How does one say it gently? Arabs are barely recognizable in the media. Arabs don’t bring in ratings. Our ability to produce a story about an Arab citizen on Israel’s leading television station — one that will cause the viewer to identify, to feel something — is nearly impossible.

But the coverage of those 13 Arab citizens who were killed provided the answer.

Had a talented screenwriter or author sat down to try and write a fictional account of the incident, he wouldn’t have come close to getting across the real life story of Asel Aslih from the village of Arraba.

A 16-year-old with a round face and a soft look in his eyes. He was shot in a field, but never took an active part in the protests.

Asel was one of two children who were raised on tolerance and peace. Two years prior, Asel took part in a summer camp put on by “Seeds of Peace,” an American organization that brings together Israeli and Palestinian children so that they get to know one another and work to promote peace and acceptance of the other in their own communities.

Asel was a big supporter of Seeds of Peace’s mission. His room was plastered with the group’s posters, as well as photographs of him sporting a Seeds of Peace t-shirt.

Journalist Itay Engel went out to report on this story, which, after it aired on Ulpan Shishi, turned out to be even more powerful than we ever expected.

And that is how Asel, after his unnecessary death, became a symbol of those difficult weeks. No one could remain apathetic to a story of a life cut short. No one could argue with his father or sister, who turned into the most prominent and powerful spokespeople of the deep breakdown in Arab society during the October 2000 events. Aseel’s father would go on to become the spokesperson for the bereaved families of those killed, taking part in every meeting of the Or Commission, which was established to look into the circumstances surrounding the deaths of the 13 Israeli citizens.

It is painful to remember. It is disturbing to think that 15 years on, a good portion of the commission’s findings have not been internalized. That even today, one cannot safely say that these things won’t repeat themselves. So that Asel’s death won’t be in vain.

Anat Saragusti is an Israeli journalist and former editor of Ulpan Shishi. A version of this article was also published in Hebrew on Local Call.