UPDATE: An Israeli woman arrested during Friday’s demonstration in Nabi Saleh, who refused to sign an order forbidding her from entering Nabi Saleh for two weeks as a condition of her release, has today been released without conditions.

Two dozen Palestinian, Israeli and international activists were arrested at a protest marking one week since the killing of Mustafa Tamimi; IDF fires tear gas, “skunk spray” on protesters with start of demonstration.

Of the two dozen people who were arrested at Friday’s weekly demonstration in the West Bank village of Nabi Saleh, most – the Israelis and internationals – were released by Saturday. The Palestinians, however, were held longer. Muhammad Khatib, a coordinator from the Bil’in Popular Committee was released later on Sunday, and Mohammad Tamimi from Nabi Saleh was still detained on Sunday evening.

As a condition for their release, the Israeli and international activists were required to sign injunctions forbidding them from entering Nabi Saleh for two weeks. Two Israeli women who were arrested initially refused to be released. One refused as a protest against legal discrimination of Palestinians, who are tried under a military court system, as opposed to the regular civil process for Israelis. She was ultimately released.

The other Israeli refused to sign the order on the grounds that the IDF’s policy of declaring Nabi Saleh, Bil’in and Ni’lin as “closed military zones” – making it illegal for Israelis to enter these areas for any purpose at the Friday demonstrations – is a violation of the right to assembly.  A judge rejected her claim at an arraignment hearing today, and she is scheduled for another hearing tomorrow.

One week after the death of Mustafa Tamimi, hit by a tear-gas canister fired by the IDF at very close range, the regular demonstration at Nabi Saleh on Friday was larger than usual, with over a hundred activists including Israelis, Palestinians and some internationals. A substantial press corps also attended.

The demonstrators marched down the road leading out of the village, as they have every Friday for nearly two years. They sought to reach the nearby spring, which has been taken over by the settlement of Halamish, making it impossible for villagers to reach the water source. 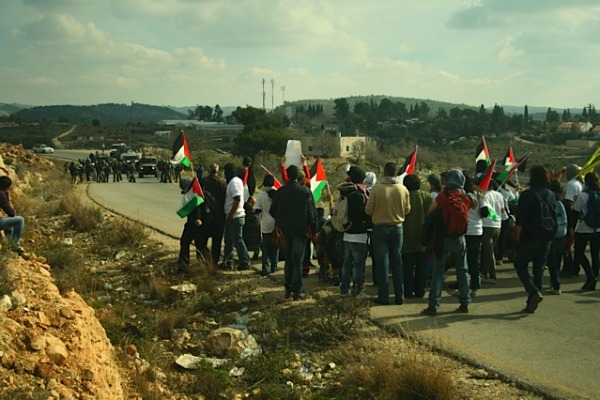 The IDF used crowd dispersal methods almost immediately; the demonstrators had barely rounded a bend in the road when tear gas was fired in all directions. Both sides of the road were soon clouded over and many fled; at least one woman fainted immediately and was carried away, while others coughed, choked and cried before returning to the road.

The IDF continued in a methodical way: firings rounds of tear gas first to the left of the road, then to the right – streaks of gas exploded in firework patterns and a breeze scattered the painful air around. The demonstrators partially regrouped, and next an army truck advanced, causing them to flee back up the road again. The truck then fired an enormous geyser of what looked like water into the air. A rank stench filled the whole area, a stink so foul it is referred to as “skunk.” 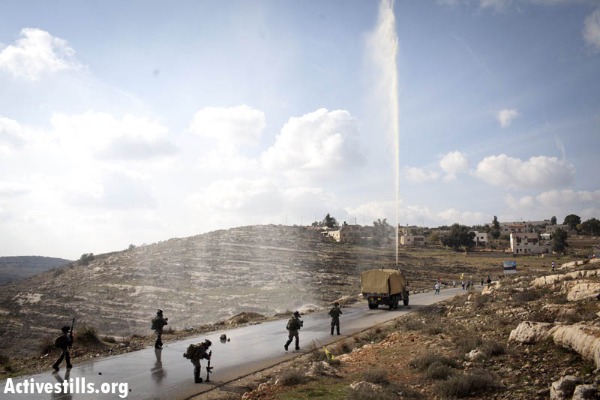 But some of the demonstrators had already managed to scurry off the road and make their way to towards the settlement. As army jeeps advanced toward them, they quickly took up positions, linking arms and sitting down immediately by the side of the road. They were arrested forcibly, with Border Guard forces prying each one away from the other. 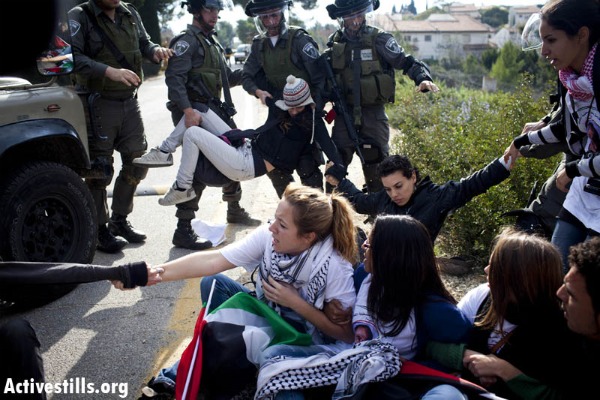 The charges against Mohammad Khatib (wearing a gray shirt in the video below) involved attempting to assault a soldier. As one Facebook post noted dryly: Judge for yourself.

Noa Yachot and Noam Sheizaf contributed reporting to this article.

This article has been corrected: Some stones were thrown later in the day on Friday, after the main demonstration had already broken up.