facebook twitter email link
It’s a chilly night on Gaza St. in Jerusalem, and Binyamin Netanyahu is covered by a thick TV blanket in his Lay-Z-Boy, feet up, watching reruns of M-A-S-H. He loves Klinger.

Holding a cup of Swiss Miss (with marshmallows), he feels lonely. Sara is in the States for some stupid psychologist convention on controlling child tantrums. He wished her a good trip before she left, but deep inside he hopes she doesn’t talk too much.

Fiddling with his mug, he glances at the phone on the table next to him. Should he call? It could be a good opportunity… especially with Sara away. And with the DVD that Dershowitz sent him… who knows, could be fun. Dershowitz sent him the now famous “Palestinian Chicken” episode from “Curb Your Enthusiasm.” Bibi heard it was fantastic. Dershowitz recommended he not watch it alone.

He runs his fingers on top of the receiver, contemplating.

Finally, he lifts the phone and dials.

In the Muqata in Ramallah, Abu Mazen has just finished watching Pulp Fiction. He loves Travolta. The phone rings as he puts down a small plate of knafa that’s way too sweet for these hours.

Abbas crashes onto the couch, trying to keep his breathing at a normal rate. Inside, his heart is pounding.

The door knocks just as the microwave popcorn is ready. Bibi rushes to the door. As he opens it, Abbas shyly smiles.

Abbas: Hey…
Netanyahu: Hey! Come in, come in… sorry about the mess.
Abbas: Ah, it’s nothing. You should see the Muqata!
Netanyahu: Well, I guess we had something to do with that, right?
Abbas: Well yeah, you know. Bygones…
Netanyahu: Yeah… well… whatever… So, hey – take a seat. I’ll get the popcorn.
Abbas: Cool, thanks..

Abbas sits down on the couch. Bibi plomps down next to him, very close. They both glance at each other and quickly turn heads away, to the popcorn. Abbas looks around the room.

Abbas: So, you say you got this DVD from a friend?
Netanyahu: Yeah, yeah – Alan Dershowitz, a famous lawyer in the States.
Abbas: Wasn’t he in that Jeremy Irons flic?
Netanyahu: Yeah! Wow! I’m impressed! “Reversal of Fortune,” great movie.

Abbas: Cool… anyway, which episode are we watching?
Netanyahu: The “Palestinian Chicken” one.
Abbas: Oh, I think I heard about it. Yalla, I’m ready.

Netanyahu starts the episode. They both get comfy, each under their respective TV blankets. Legs touching.

Abbas: Hey! They named it after me!!!
Netanyahu: Well of course… you’re the best Mahmoud….

Netanyahu looks at Abbas, and puts his hand on his thigh. Abbas  can barely breath… he almost chokes on some popcorn.

Next, they’re into the famous sex scene. As the woman yells “You wanna fuck me me like Israel fuck my country?”, Bibi starts to rub Abbas’ thigh faster. Bibi feels the passion rising, burning in his loins

Abbas begins to sweat, he raises a hand to his neck and closes his eyes slowly. 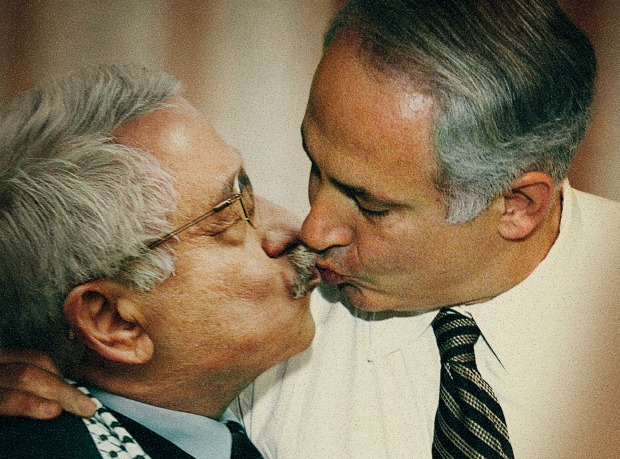