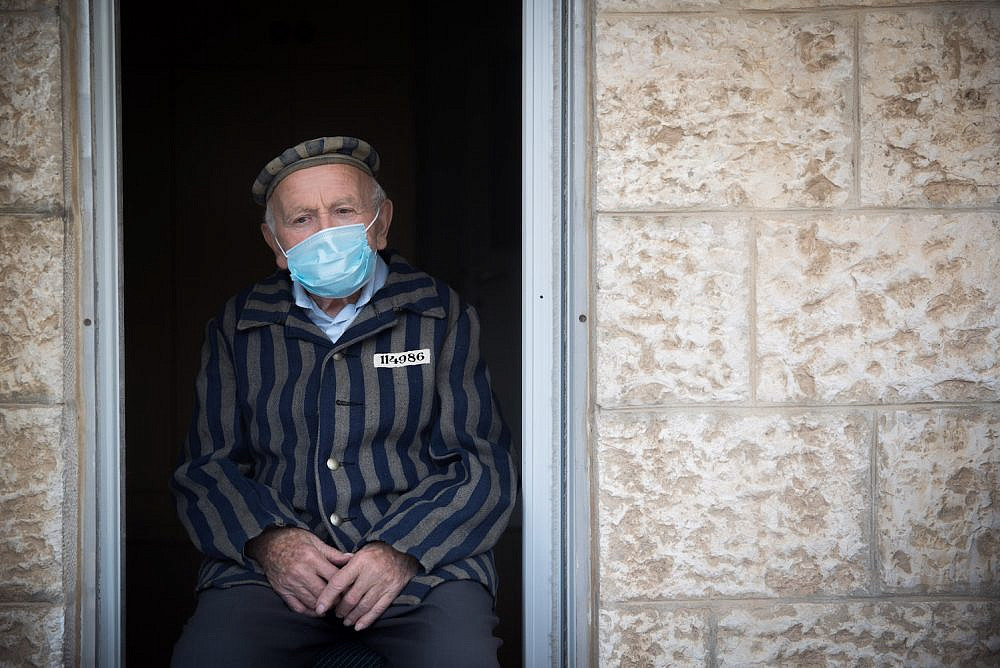 A Holocaust survivor is seen wearing a face mask as he sits at his porch in Jerusalem on Holocaust Remembrance Day, April 21, 2020. (Yonatan Sindel/Flash90)

There is a book in Prime Minister Benjamin Netanyahu’s office that explains a good deal about his worldview, and particularly the way he views the Jewish people, his approach to Holocaust Remembrance Day, and his response to the ongoing coronavirus pandemic.

The book, “And Every Single One was Someone,” published in 2013 by Rabbi Phil Chernofsky, consists of a single word repeated six million times over: “Jew.” According to Netanyahu, this book, which the prime minister has previously gifted to a Holocaust survivor, serves as a reminder of the atrocities of the Holocaust, as well as of the constant need to ensure that such horrors never befall the Jewish people again.

The Holocaust was, at least in part, made possible by the Nazi regime’s reduction of millions of people — every single one of whom had a name, face, interests, passions, family members — into one thing only: their Jewishness. Yad Vashem’s commemoration philosophy in part revolves around the effort to resist this reduction, and to remember each person as more than what is captured through this narrow definition — to tell us about the lives of those who survived and those who did not through photos, sound clips, testimonies, and more. 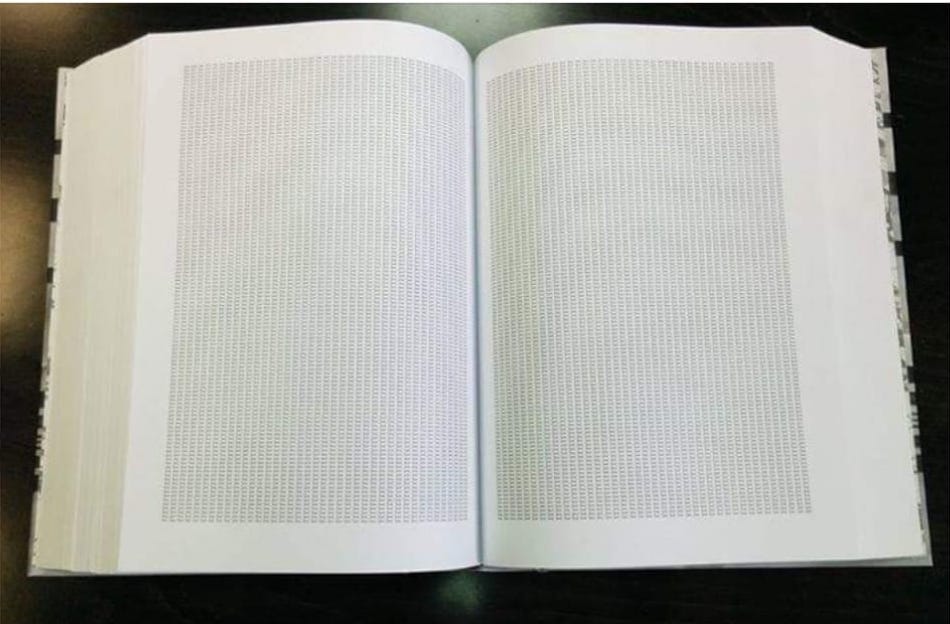 An image of Rabbi Phil Chernofsky’s ‘And Every Single One was Someone.’ (Screenshot from Prime Minister Netanyahu’s Facebook page)

Chernofsky’s book, on the other hand, and perhaps unintentionally, minimizes the victims of the Holocaust to their Jewishness alone. Those who perished have no names or faces. They are Jews and must be remembered only as such, reduced to a single word repeated six million times.

Netanyahu’s praise of Chernofsky’s book can also teach us something about the way the prime minister, and his predecessors, view many of us who live in Israel. To them, our sole purpose is to serve as little more than a number in Israel’s “demographic war” against Palestinians. Under Zionism, we are reduced to our Jewishness alone, while any other aspects that make us human are entirely stripped away. In a sense, while we were raised to believe the Zionist project was created to serve the interests of Jews, it seems that — in the eyes of this project — the purpose of Jews is to serve the interests of Zionism.

Since its inception, Zionism has been built on a clear hierarchy. Like other discriminatory ideologies (for instance, patriarchy), this hierarchy comes with a price tag not only for those at the bottom of the ladder, but also for those who enjoy the privileges of being at the top. That is because when societies are built around rigid categories and classifications, people are often reduced to these categories. In other words, instead of these categories serving us, we are subjected to these categories, and the ideologies that dictate them.

Think of the way men must fit themselves into ideals of masculinity. While they certainly enjoy the privileges afforded to men, they will always be seen and judged first and foremost as men, rather than as people with feelings, ambitions, and dreams of their own. Under patriarchy, men who challenge what a “man is supposed to look and act like” often pay a price for their behavior. Under Zionism, like under patriarchy, our categorization as “Jews” outweighs everything else that makes us full human beings.

This approach may explain the contradiction between the central role the Holocaust plays in the Israeli ethos and the dire situation facing many Holocaust survivors in Israel, some of whom live in dilapidated apartments with no money for food or medicine. They contribute to the Zionist project primarily as symbols, meaning they have already served their purpose, and so their actual livelihood, welfare, and well-being can now all be neglected by the same state that is enlisting their story. Like men under masculinity, the limited role created for them by Zionism doesn’t allow for them to be recognized as complete human beings; even though they are allegedly at the top of Zionism’s ideological ladder, that ideology, at the end of the day, will always take precedence over the people it claims to serve.

This symbolic template is also the reason why Netanyahu has no problem embracing anti-Semitic leaders across the world while calling on Jews living in those countries to immigrate to Israel, or as Netanyahu has put it, to “come home.” The fate of Jews living in communities around the world is reduced to the question of “aliyah.” Can we count you in our book or not? 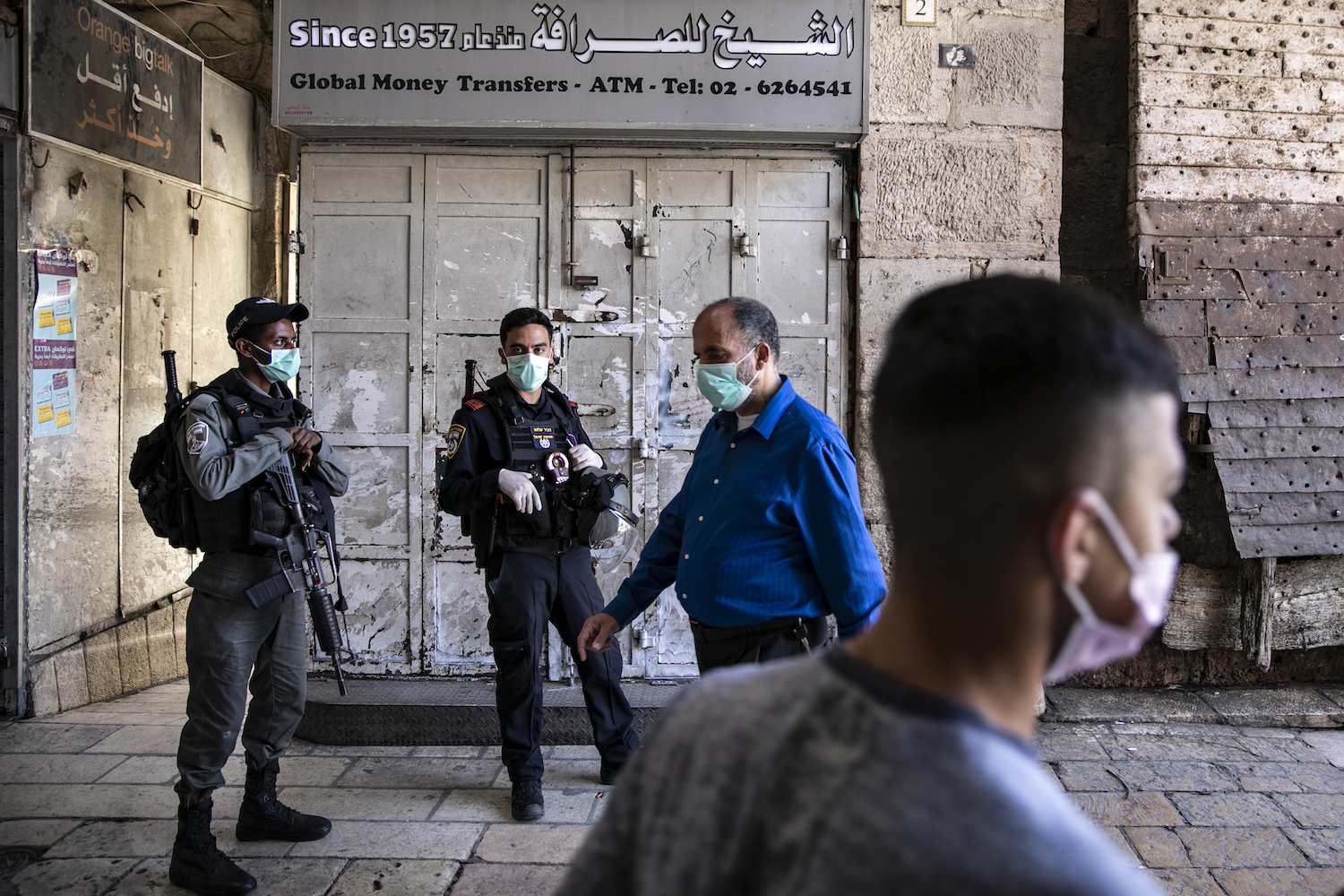 We’ve long known that the Zionist ethos has divided those under Israeli rule into two categories: “Jews” and “non-Jews.” It is this classification that has, since Israel’s founding, served as the ideological backdrop for its systematic discrimination against asylum seekers, migrants, and Palestinians, both inside Israel and in the occupied territories. Israel’s management of the COVID-19 crisis provides another example of the racial hierarchy of Zionism, leaving Palestinians and refugees uniquely vulnerable to the pandemic.

As of now, hundreds of thousands of employees have been dismissed from their jobs with unpaid leave, many of whom have been offered unemployment compensation far below their regular monthly income. Meanwhile, doctors who have been placed in quarantine due to exposure to the virus have seen their salaries cut in half. The Welfare Ministry’s flagship program to assist poor families has been cut by 30 percent. According to the Labor Ministry, around 9,000 pregnant women have been dismissed or fired under emergency regulations (that have since been canceled) and most self-employed Israelis have been almost completely abandoned.

The frustration and helplessness of many was encapsulated by a video circulating on social media featuring Yuval Carmi, an owner of a falafel stand in the working class city of Ashdod, who can barely hold back his tears while being interviewed outside his business just minutes after learning from the police that he was not allowed to open due to quarantine restrictions. His reaction captured the deep frustration and helplessness of so many Israelis during the past month:

Israel’s treatment of its poorest Jewish citizens, and the lesson we can learn from the book sitting in Netanyahu’s office, reveals the ways in which the cold, dehumanizing reduction of everyone under Israeli rule to Jews/non-Jews affects us Jews as well. It sees us as a means to the Zionist project’s end. As a word in a book, nothing more. We are nothing but Jews to this government. We have meaning when we are alive as Jewish citizens in a Jewish state. We have another type of meaning when we’re dead. But this meaning appears to start and end with a word count. Most of us, most of the time, are not viewed by this government as people. Not in the full meaning of the word.

Lihi Yona is a JSD candidate at Columbia Law School focusing on employment law and race theory in Israel and the United States.