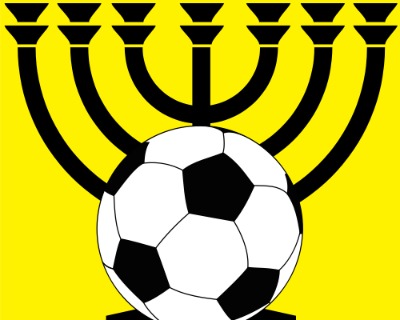 You’re sitting in the bleachers at a Yankee game. You brought The New York Times with you, just in case things get slow. Or at least for the seventh-inning stretch. You read about how Steinbrenner is considering buying a new player from Haiti, or the Dominican Republic.

Suddenly, you lift your head and see a huge flag hovering over the fans, written in large black print: “NO SPICKS!”

You drop your beer, right?

Well, that’s pretty much what happened during a Beitar Jerusalem game. During a league game last night, Beitar fans rolled out a sign saying, “Beitar, pure forever,” in response to the team’s intention to hire two Muslim players from Chechnya.

Of course, the usual condemnations of politicians and other public figures came. They’re just as useful as U.S. condemnations of settlement expansions. (Even Kahanist Baruch Marzel condemned the act, showing basically any racist can hide behind kind words. Although, in his same Facebook message he promised to come to Beitar’s next game in the Arab city of Umm el Fahm. We’ll be very lucky if this goes by quietly).

I’ve written a few times about the racism of the capital city team, so it’s not really that surprising.

I guess what touches a nerve with most people is the coincidental timing of it all – today being the International Holocaust Remembrance Day.

Here’s what Rabbi Michael Melchior wrote on his Facebook wall about Beitar:

This morning we awoke, in the state of the Jewish people, on International Holocaust Day, with huge signs in yellow and black reading “Beitar (Jerusalem’s soccer team) Will Forever Remain Pure.”

We are returning to an agenda of racism that is spreading like wildfire in our midst. How fortunate we are to have Arcadi Gaydamak (owner of Beitar Jerusalem), who was sentenced this week to three years in prison in France for corruption, to teach morals and values in our country! In contrast, we have his coach, Eli Cohen, who said that so long as there are no Arab players on the team, then everything is fine. And the team chairman, Kornfein, who rationalized that the players joining the team are not really Muslims, but Chechens.

To add insult to injury on this momentous day, a radio station called this morning asking me to comment on the news about a young Druze man, Rani Tarif, a student who works as a security guard at a government office, who was repeatedly called out, disgraced and prevented from entering nightclubs around Haifa with his Jewish friends.

Just as we require nations of the world on this day, and rightly so, to create a plan of action against anti-Semitism, racism and xenophobia, it is not enough for us to say we will not cross over into racism and then do it anyway. We need a comprehensive plan put in place in the educational and legal systems, and in the entire public sector, and we must show zero tolerance for all forms of racism. “Kee B’Nafshenu Hee” – Because that is who must be.

Here we are, remembering the crimes of hatred and racism, while the hatred and racism amongst us is rampant. Last night it was Beitar. Two days ago it was Yair Lapid and his refusal to sit in a coalition with the “Zoabis,” referring to the Arab parties.

One of my Facebook friends asked a good question: Is there really a difference between a politician who doesn’t want Arabs on his team, to fans who don’t want Muslims on theirs?

And if that isn’t enough, Israel finally admitted today that it administered birth control shots to Ethiopian women. The issue was first reported five years ago, but was until now denied by the authorities. Haaretz reports today:

About six weeks ago, on an Educational Television program journalist Gal Gabbay revealed the results of interviews with 35 Ethiopian immigrants. The women’s testimony could help explain the almost 50-percent decline over the past 10 years in the birth rate of Israel’s Ethiopian community. According to the program, while the women were still in transit camps in Ethiopia they were sometimes intimidated or threatened into taking the injection. “They told us they are inoculations,” said one of the women interviewed. “They told us people who frequently give birth suffer. We took it every three months. We said we didn’t want to.

Why was this done? Who wants fewer Ethiopian children in Israel?

Sure, I know racism is everywhere. It exists in every country. In the stadiums in England, Germany, France and more. On the streets of New York, New Orleans and Gaza.

I guess I just had higher hopes, after all we’ve been through.

But on a happy note, here’s an initiative I saw today that made me smile. An organization called Roots, which helps the elderly and Holocaust survivors who live by themselves, takes old clothes they don’t wear anymore, fixes them up and is selling them online. All proceeds will go to the foundation. Check it out: