Jeffrey Goldberg believes that the Jewish settlement in Sheikh Jarrah is “not necessarily” in the best Jewish self-interest. Why not? Because peace is important, and without a Palestinian East Jerusalem, there will be no Palestinian state, and hence, no possibility of peace. Israel will either cease to be a Jewish state (through the absorption of Arabs), or it will cease to be democratic. “It will not survive if it becomes a pariah state, and, in this unfortunate world in which we must exist, Israel is in danger of becoming an outcast among nations.”

For Goldberg, the ultimate and overriding moral injunction is to preserve the state of Israel. All other considerations, if they obtain at all in this “unfortunate world in which we must exist,” are secondary. If the Judaization of East Jerusalem conformed to Jewish self-interest – didn’t Jewish self-interest dictate the Judaization of the Arab neighborhoods of West Jerusalem? — Goldberg would apparently see no problem. After all, “Jerusalem is Judaism’s holiest city” and “Jews have a right to live wherever they want in the Land of Israel”. As for the Shepherd Hotel, “in and of itself, it is not a morally profound issue.”

It was bought legally by Jewish buyers years ago; it did not house Palestinians, and it is associated with the former Mufti of Jerusalem, Haj Amin al Husseini, who was an actual bona fide Nazi, so its disappearance does not cause me sorrow. The world’s focus on Sheikh Jarrah is, of course, disproportionate in the larger scheme of thing.

Goldberg does not say whether the removal of Palestinians from Sheikh Jarrah is a “morally profound” issue; perhaps, he thinks that it is. 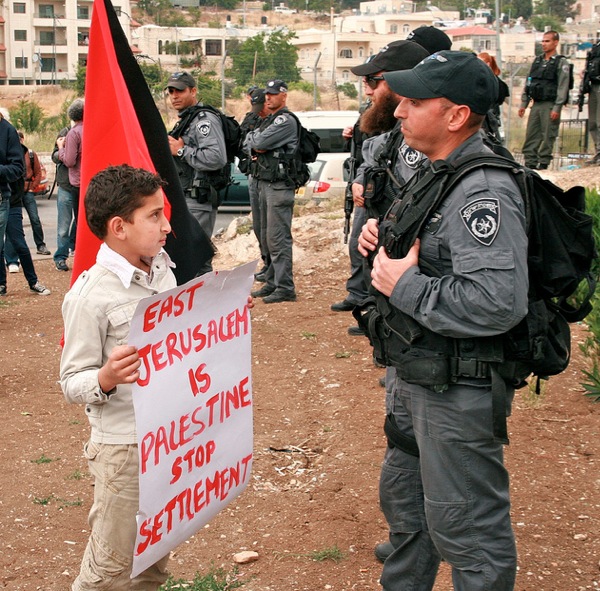 What is wrong with all this? In the end, Goldberg opposes the de-Arabification of East Jerusalem. What difference does it make how he reasons? Isn’t he getting enough flak from his rightwing readers for his liberal-hawkish Zionist perspective. Shouldn’t I be giving him a break?

No, I shouldn’t, for two reasons. First, Goldberg’s account is factually incorrect and tendentious. Second, it lacks what is lacking in almost all the liberal hawkish/neocon writing on Israel: holding Israel to a reasonable moral standard besides that of the Mafia.

First, the facts: Goldberg surely cannot be unaware that almost all of the “sales” of Arab property to Jews in East Jerusalem are at best legally and morally questionable, and at worst, bogus. Some properties have either been purchased by the state, often with secret funding funneled through groups like Ateret Kohanim, with the express purpose of Judaizing East Jerusalem and ridding it of its Arab heritage. This has been described in numerous books and articles (see, for example, Separate and Unequal: The Inside Story of Israeli Rule in East Jerusalem, pp. 216-218; the Ir Amim website should also be consulted.)

Some of these sales have been judged bogus even by the Israeli Supreme Court. Most of the properties were transferred to Jewish owners on the basis of the Absentee Property Law of 1950, by which the state was allowed to take property of Arabs who left for, among other places, Jordan. In some cases, we have the absurd situation where property owners living in East Jerusalem, occupied by Jordan in 1948 and then by Israel in 1967, may have their title to ownership disputed because they “fled” to Jordan (i.e., East Jerusalem) in 1948. But even when this is not the case, the use of the Absentee Property Law is morally outrageous, even according to those liberal Zionists who justified its use in 1948.

And how does the theft work? Settler groups try to find Arab homes whose owners are no longer there, have them registered with the custodian for absentee property, and then receive them from the government. This cooperation between settlers and government began in the late 80s and has continued ever since; since Nir Barkat was elected mayor of Jerusalem, it has become a national disgrace.

The Judaization of East Jerusalem is not the story of conventional real estate transactions in an open city; rather, it is the story of government-sponsored ethnic cleansing of occupied territory in an attempt to erase the historical and physical presence of Arabs in East Jerusalem – sixty-three years after the government did the same thing in the Arab neighborhoods of West Jerusalem.

Goldberg also must be aware that the Jewish ownership of both the Sheikh Jarrah properties and the Shepherd Hotel is disputed. In the former case, the owners have Ottoman documents that they claim show that the land was rented to, and not purchased by the Sephardic committee. But even if the Sephardic committee was the owner before 1948, it is morally outrageous to evict Arab families who were not allowed to return to their homes in W. Jerusalem, and who were sold these homes by the Jordanian authorities over forty years ago. They have now become refugees twice – both times because of the state of Israel not allowing them to return to their homes. If it is just to transfer the Sheikh Jarrah homes to rightwing Jewish extremists on the grounds that it was owned by Jews in 1948, why is it not just to transfer homes in Talbieh, Baka, and Katamon, to their original Arab owners? The injustice cries to high heaven, which is why leading intellectuals and people of conscience find their way to the weekly Sheikh Jarrah protests.

And what of the Shepherd Hotel? Because nobody actually turned Palestinian residents into the streets, and because over sixty years ago it was associated with the Mufti of Jerusalem, Goldberg finds nothing morally problematic in a secret purchase by an American Jewish gambling mogul in order to eliminate the Arab presence in Jerusalem, and then tearing it down to put up Jewish apartments. (When was the last time Jewish property was torn down in Jerusalem in order to build housing for Palestinian residents of the city? When was the last time that any such housing was built?) He doesn’t care that the hotel is claimed by the descendants of El-Husseini family and was questionably transferred – without any documentation, apparently — to the custodian for absentee property? He doesn’t care that another landmark of Arab Jerusalem is deliberately erased. He doesn’t care that the final word on justice in Occupied Jerusalem (maybe not “occupied” according to Goldberg, but according to the rest of the world) is given to the Supreme Court of the Occupier, which can only judge according to laws that favor Jewish claims. None of these moral outrages bother him – what interests him is only Jewish self-interest.

Jewish self-interest will no doubt allow Jewish tourists to sleep in the five star Palace Hotel now being renovated in West Jerusalem (after being seized by the Israelis in 1948), despite the fact that it was built and owned by the Mufti.

In Jerusalem, Palestinians have suffered undeniable injustices for over sixty years, beginning with their expulsion from their homes in 1948, the subsequent theft of property and annexation (unrecognized by the world to this day), and ending with the annexation and Judaization of East Jerusalem, a process that only has accelerated in recent years. None of this matters to Israel supporters, unless it reduces the chance for peace.

Is Israel’s conduct in East Jerusalem bad, or merely bad for peace?

It is indeed bad for peace, but more importantly, it is just bad..

This article is cross-posted from the Magnes Zionist blog, with the author’s permission.