Settler violence forced M. from his home and after his olives were stolen, his house was suddenly set on fire. 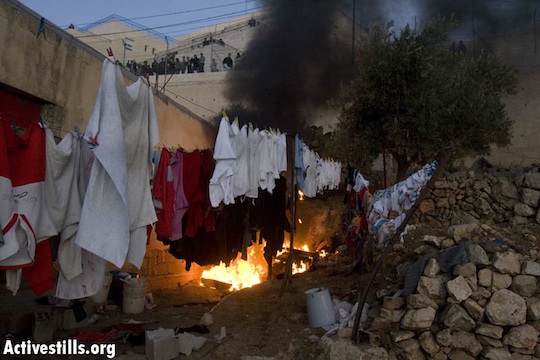 [Illustrative photo]: A Palestinian house burns after it was set on fire by settlers in the West Bank city of Hebron during the eviction of Jewish settlers from a disputed building. December 4, 2008 (Activestills.org)
Nowadays, M. lives in Nablus. Until about a decade ago, he used to live in his house in Burin, a house he was forced to leave due to unceasing settler violence. He had children, after all. They were young then. M. worried about their fate, and told himself that if he just left the house for a few months, the settlers would forget about him.

Things did not turn out that way. Three months after M. settled down temporarily – or so he hoped – in Nablus, the settlers took over his Burin house. Because that’s how it goes in the West Bank: you can take over someone’s private property without showing ownership, assuming of course you’re a Jew. M. complained time and time again to the police, but nothing happened. And why should it?

Seven years passed with the settlers loafing in the stolen house, and four years ago – for reasons beyond M.’s ken – the army decided to pull them out. M. hurried to see what was left of his house, and as soon as he got there he was met by an IDF jeep. The soldiers told him the area was declared a Closed Military Zone; he informed them it was his house. They were underwhelmed by the statement.

M. went off to the IDF’s District Coordinating Office (DCO), holding the paperwork proving beyond any doubt that he is the owner of the house. The DCO told him that’s nice of him, but that the house is in Area C, and the fact that it is close to the settlement of Har Bracha causes “friction.”

Here we’ll note, for the umpteenth time, that the guarantor of the Palestinians’ protection in the West Bank is a minor, penniless organization called the IDF. It is the occupier and as such, their protector. If a Palestinian suffers from endless harassment by settlers, the army – according to international law and decisions of the Israel’s own High Court of Justice – is supposed to protect him. Not the settlers. The Palestinian. As far as I’m concerned, if the IDF can’t deter the settlers, it should guard threatened Palestinians around the clock. I suspect that if the IDF was forced to dedicate the necessary assets to that, we’d soon see a sharp decline in Jewish terrorism – the terrorists are used to the army backing them up.

That is, if the proximity of M.’s house proximity to Har Bracha causes “friction,” it ought to have been the settlement’s problem, not M.’s. But, of course, that was not the case. M. spent the last four years in attempts to get the DCO to allow him to return home. To this day, he has not received a definite answer. Naturally: had they allowed him to return, the army would have to protect him; had they declined the request, they’d have to compensate him. Why decide, when you can simply leave him in legal limbo?

About a year ago, M. went to harvest his olive trees, which are next to the house. He surprised a gang of people he described as settlers as they were picking his olives. In response, they attacked him. Nothing to see here, move along.

Two weeks ago, M.’s house was set ablaze. The house stood empty, as noted, for some four years since the army forced the settlers out. M.’s brother noticed a large cloud of smoke coming from the place. The house and its surroundings were on fire. Our brave troops prevented a Burin fire truck from reaching the area.

How much damage did the house sustain? We don’t know since the army refuses to let M. reach the place, M. does not know what state the house is in, whether there is any point in reconstructing it, how much it will cost or whether he will ever be allowed to live in it. Try to put yourself in his shoes; try to think about what it means to not be able to check the state of your property which has been set afire. The IDF, it seems, is rather good at blocking owners from reaching their property. A pity it isn’t half as good at blocking arsonists.

In the grand scheme of things, this story is not exceptional. No national epic will be written about a house first stolen from its owners, whose heart went out to it and couldn’t reach it, and which was finally burned down without him even being even permitted to reach the ruins. There are plenty of greater injustices around. It’s just a daily wrong of the occupation. Just a minor mine in a road, already twisted, on the way to peaceful coexistence.