An Israeli decision to continue the occupation is illegitimate, even if it was reached through a democratic process. Democracy has no meaning when the population at hand is not allowed to take part in it. 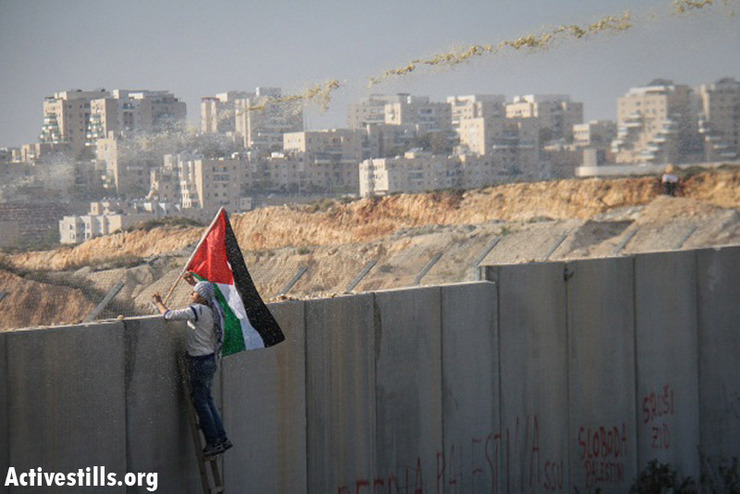 A demonstrator waves a Palestinian flag as he looks over the wall during the weekly protest against the wall and the occupation in the West Bank village of Bil’in, January 4, 2012. (Photo by: Guest photographer Hamde Abu Rahma/ Activestills.org)

This is a slightly modified translation of my weekly op-ed in the Israeli daily Maariv.

“Occupation denial” is the latest trend in the Israeli (and American) conversation regarding the conflict. Conservative scholars are presenting a revisionist reading of the Fourth Geneva Convention, claiming that it never applied to the West Bank and Gaza, while politicians are claiming that the term “occupation” is biased.

Yet all those verbal and legal gymnastics won’t change reality: the term occupation does not relate to land alone, but also to the people living on it (and the ones who used to live on it). The undeniable truth is that under Israeli sovereignty, there are currently two distinct populations: one which enjoys all legal rights and privileges, and one which is held under a military dictatorship for 45 years (even if the in the last two decades some elements of the military control are being executed through a Ramallah-based proxy, and with European and American funding).

Those who think that the political problem at our doorstep will simply disappear if they call the Palestinians “Arabs” and the occupied West Bank “Eretz Yisrael” (“Land of Israel”), are deluding themselves. I also believe that Hebron and Bethlehem are part of our historic land just as Tel Aviv and Netanya are, but there are currently millions of people with no rights living there, and this fact is way more important. There are Israelis who get that – even on the right – but the majority of the public and the political system prefers to live in fantasy land.

Peace activist Gershon Baskin reminded us yesterday that no Knesset nor any Israeli government has ever formally adopted the two-state solution. There were several prime ministers who made some real steps in this direction – while others did all they could to avoid it. At the same time, Israel has strengthen its hold on “the territories.” Even during the era of the disengagement and the settlement freeze, the area slated for construction projects for Jews has grown, as did the number of settlers. The injustice on the ground increased, but every election the Israeli public has granted this policy its stamp of approval.

This should be clear: an Israeli decision to continue the occupation is illegitimate, even if it was reached through a democratic procedure. Democracy has no meaning when the population at hand is not allowed to take part in it. Israelis cannot “democratically” decide to keep Palestinians as their prisoners; to prevent them from traveling freely; to try them in military courts; to hold them under a military regime which views them as an enemy rather than a civilian authority which seeks to serve them. They are not objects, but human beings, and they have rights.

Many nations have not gained independence, but even the people of Tibet or the Kurds – let alone the Basques or the Catalans – are citizens of a country. Israel won’t give the Palestinian citizenship nor independence. All it offers is endless negotiations that will either lead or not lead to a point in which millions of people will receive those very rights that weren’t ours to deny.

For these reasons, international intervention in favor of the Palestinians is not only legitimate but desirable. Needless to say, human rights campaigns and struggles over rights of minorities – and especially native minorities like the Palestinians – always have an international dimension in them, because the ethnic group in power is almost never happy or willing to hand over those rights. This much was true in South Africa, China and even the segregated American South. In all those cases, embarrassing the authorities and exposing their immoral policies was considered a legitimate and even desirable strategy among political activists.

The prolonged Israeli occupation, the Jewish public’s indifference to the status quo and the self-perception of Israelis as part of the democratic West create added justification in the attempt to mobilize international public opinion and institutions for the cause of ending the occupation, despite all the rage that such actions might create among the Israeli public.

Related:
No end in sight: Occupation marks 45th anniversary
The Israeli negotiator who thinks the two-state solution is still possible