Labor leader Yacimovich asks not to be called a ‘lefty’ and shows hospitable face to the settlers, while Yair Lapid rejects compromising on the issue of Jerusalem. 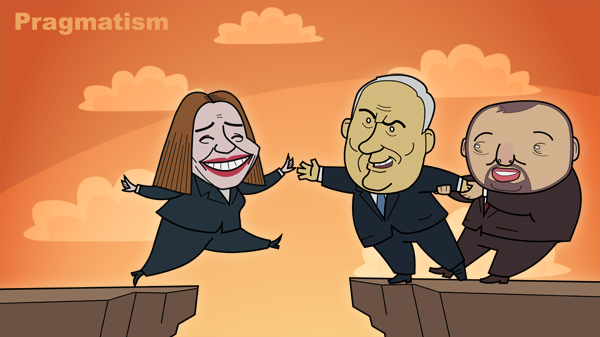 The heads of the two leading parties to the left of Netanyahu have made statements on the Palestinian issue this past week which place them very close to the prime minister. Yair Lapid, leader of the newly formed Yesh Atid party, declared that it is possible to keep all of Jerusalem in Israeli hands, if and when a Palestinian state is formed. Shelly Yacimovich of Labor gave an interview to the settler website Arutz 7 in which she declared that Labor is not a left wing party. It is presumed that either Yacimovich or Lapid will serve in Netanyahu’s next government, if not both of them.

Yacimovich has shown again her desire to distance herself from the Palestinian issue:

I think that for too many years the public debate was left or right, the whole land of Israel [for Israel] or not the whole land… the time has come in these elections to not vote only on a diplomatic agenda…

Q: Is Labor a leftist or a centrist party?

Calling Labor left is historically unfair. Labor has always drawn its power from being a centrist party, a party that wants a pragmatic peace and doesn’t dream dreams. The pragmatic approach of Labor is two states for two people… land swaps and keeping 80 percent of the settlers… any diplomatic move should be made out of national consensus and not out of hate or incitement [against the settlers – N.S]

Yair Lapid has declared on several occasions that he will not agree to a divided Jerusalem. In a meeting with security establishment veterans, Lapid said this week that if Israel insists, the Palestinians could be persuaded to give up on Jerusalem. Currently, there are 300,000 Palestinians living in the annexed part of Jerusalem. They have limited civil rights and they cannot vote to the Knesset. According to Lapid, under a final status agreement, Palestinians in Jerusalem should be made Israeli citizens.

In the past, Lapid has also demanded that his party would not be referred to as part of a “left” bloc in the Knesset.

A few words of commentary: There is a lot of wishful thinking going around regarding the chances to beat Netanyahu in the upcoming Israeli elections, especially given the results of the U.S. elections. But if there is one thing we could have learned from Tuesday night, it is that polls are usually right, or that one should try to avoid projecting desires onto them. Polls in Israel are very consistent, and so far none – none! – have shown Netanyahu without a ruling majority. The recent declarations show that beneath all the levels of rhetoric on “campaigning to win,” both Lapid and Yacimovich recognize this, and thus are leaving the doors open for future collaborations with Bibi.

Lapid and Yacimovich are not identical in their positions – Lapid wants Israel to negotiate with the Palestinians but there isn’t a serious Palestinian who would sign on to his ideas, while Yacimovich simply wants to avoid the occupation altogether. Still, those variations are minor, and both politicians, who are selling themselves as the alternative to Netanyahu, betray the unspoken understanding that the Israeli public is satisfied with the current status quo. Political competition in Israel is indeed fierce, but it should not be mistaken for an argument over the occupation. Even in the unlikely event of a Netanyahu loss, Israeli policy won’t change.