Raviv Drucker is a prominent Israeli journalist and political analyst with his own program (co-hosted) on Channel 10 News. He’s one of my favorites, because he’s supremely well informed, doesn’t suffer fools (gladly or otherwise) and back in the day was generous with his knowledge toward novice journalists who speak Hebrew with a weird accent (could be me; I’m not saying…). Below is the blog post he published on Friday in response to the claim, put out by Tzipi Livni and Yair Lapid, that the (still unofficial) collapse of the Kerry-sponsored talks is all the fault of  Mahmoud Abbas, the president of the Palestinian Authority. The tone here is one of sarcasm, rage, and deep sadness. A note on the translation: Israeli journalists generally refer to Abbas as Abu Mazen, which is his kunya.  (Translated with permission of the author.) 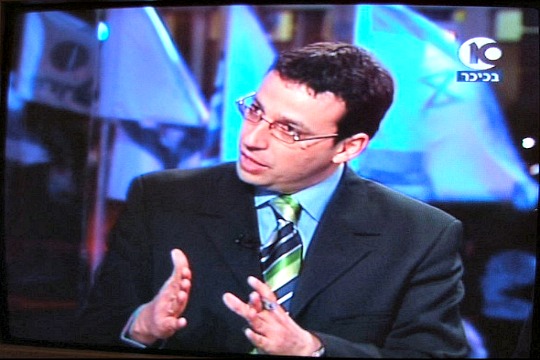 Yair Lapid issued a statement: Abu Mazen [Mahmoud Abbas] is the one at fault. He made a demand that was completely beyond the realm of acceptability. Israel is committed to the diplomatic process — of course we’re committed — but there is no way to make peace with a man like Abu Mazen. The people in Tzipi Livni’s inner circle are also saying that Netanyahu came a long way [in these negotiations] and Livni is angry — really boiling mad — at Abu Mazen for blowing the whole thing up.

These two representatives of the governing coalition’s so-called peace camp have set a new record in hypocrisy and revulsion. Their spin and self-delusion are nauseating, and are for only one purpose — strengthening their positions in the government. And the Israeli public will pay a heavy price for their venality. Ehud Barak could learn a thing or two from these novice politicians.

Just a few facts — not that facts are of any particular interest to Livni or Lapid. Israel blatantly and flagrantly violated the terms of agreement with the Palestinians. Upon entering these negotiations, the Palestinians agreed to shelve two of their three conditions (withdrawal to the pre-1967 boundaries and a freeze on settlement building). In return, the delighted Netanyahu committed “only” to the release of Palestinian prisoners. And then he simply did not release the fourth round of prisoners. Why? Just because. Because he felt like it. Instead, he decided that he had a condition: Abu Mazen should commit to keeping the negotiations going. Did you hear Livni and Lapid, the Knights of the Diplomatic Process, say anything about this flagrant violation of the agreement? Nope. That might have caused tension between them and Netanyahu. Heaven forbid. And then Abu Mazen “blew everything up” by submitting requests to join 15 international organizations under the auspices of the UN. Wow, what a painful violation. Once upon a time the Palestinian Authority was held responsible for releasing terrorists, or for turning a blind eye to information about terror attacks. Now their terrible violation is submitting requests to join international organizations. What a catastrophe. It’s a good thing we have 200 atom bombs to protect us from this threat to our existence.

Livni is not angry at Netanyahu for making a joke out of the negotiations, or for being responsible for more settlement growth than at any time in the history of the occupation. Lapid is not “boiling mad” because Israel suddenly made its security demands so onerous that it was impossible for Abu Mazen to meet them. Livni has nothing to say to the Israeli public about the fact that for eight months Netanyahu has prevented her from presenting a map of the negotiations, which have not progressed one centimeter. All that matters is keeping her seat as Minister of Justice while telling us with a straight face that the only reason she stays in politics is for the sake of the diplomatic process.

It’s all so depressing.