More and more, members of Israel’s ruling parties are matching their public statements to the reality they are implementing every minute on the ground: Israel’s opposition to the establishment of a viable Palestinian state and a negotiated two-state solution to the conflict. 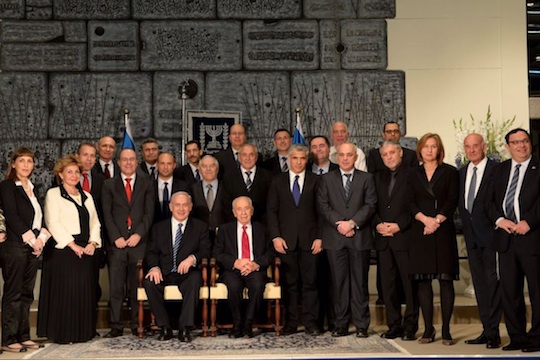 Economy Minister and Jewish Home Chairman Naftali Bennett is the latest MK to join a robust list of Israeli government coalition members who have publicly stated that the two-state solution is dead and that the notion of a Palestinian state is a thing of the past. Although it’s no new position for him, Bennett is making it clear that no matter what Prime Minister Netanyahu says or what polls show, the Israel of 2013 is squarely against a two-state solution.

Bennett stated that “the idea of forming a Palestinian state in Israel has reached a dead end,” speaking at a settler council meeting Monday morning, comparing the “Palestinian problem” to a “piece of shrapnel” lodged in someone’s rear end; that one needs to learn to live with a pain in the ass rather than surgically remove it and risk becoming disabled.

Bennett also asserted there is no occupation, since Israeli Jews cannot be occupiers in their own home (echoing the Netanyahu-commissioned Levy Report from nearly a year ago that concluded there is no occupation) and called on Israel to annex Area C of the West Bank. This is similar to what Likud MK and former Knesset speaker Reuven Rivlin said last year: “Today, almost 20 years since Oslo, one could clearly argue that the idea of separating between the nations has failed … Between the Jordan River and the sea, there can only be one state, Jewish and democratic, with a solid Jewish majority.”

There are plenty of other coalition members who have publicly come out against the two-state solution and the possibility of a viable Palestinian state, as a Knesset committee meeting on the subject exposed last month. It’s not just fundamentalist Hebron settler Orit Struck from Jewish Home, who said two states are “not part of the government’s guiding principles, and for good reason.”

MK Yoni Chetboun, also from Jewish Home, said at that meeting that, “the government has not even decided that it supports two nations for two peoples.” He is also the MK who publicly accused the Obama administration of boycotting Ariel University in the West Bank when the student body was not invited to his Jerusalem speech in March.

MK Ofer Shelah, from Yair Lapid’s Yesh Atid party, said recently that Israel will become an apartheid state if it does not pull out of the West Bank and called the occupation “corrupt.” Yet two of his party members – Pnina Tamano-Shata and Dov Lipman – attended the launch of the Knesset pro-settlement caucus a few days ago, which is committed to “bolstering the legal status of the Jewish people in the entire Land of Israel” and “rectifying the grave mistake of the disengagement [from Gaza] and preventing its recurrence.” Knesset Speaker Yuli Edelstein also attended the event.

Yair Lapid isn’t any better. His declaration that there will be no compromise on Jerusalem and no settlement freeze is pretty much as good as saying no to a two-state solution.

Likud of course has its fair share of anti-two-staters who openly oppose establishment of a Palestinian state. Likud MK Tzipi Hotovely, at the start of this year said the two-state solution is an “illusion.” Just the other day, Likud MK and Deputy Minister Ofir Akunis said settlements are actually good for peace and followed it up with the declaration that “Palestinians are not ready for statehood.”

Deputy Defense Minister from Likud Danny Danon takes the cake with his statement last week that the government will block any chance of a two-state solution and that any efforts at negotiations are futile. (MK Ahmed Tibi rightly said Danon is the most honest in the coalition as he at least does not hide Israel’s plans.)

Likud MK and Defense Minister Moshe Ya’alon said in Washington a few days ago that the Arab Peace Initiative (for a two-state solution along 1967 borders in exchange for normalized relations with the Arab world) is just “a spin.”

As for Likud chairman, Prime Minister and acting Foreign Minister Netanyahu, he has himself said Israel must reach an agreement with Palestinians to avoid becoming a binational state and that a “demilitarized’ Palestinian state could be established. So Netanyahu is in fact – as far as the political rhetoric goes – the most moderate of the bunch. Scary. Though an official in his office just stated just the other day that in fact the government “has no official position on the Palestinian issue.”

And we mustn’t forget Justice Minister-cum-chief Israeli negotiator Tzipi Livni of Hatnuah, one of the last ministers in the governing coalition still publicly invoking a two-state solution as the only way to keep Israel Jewish. But considering her work environment, she cannot be seen as much more than a fig leaf for this government.