The two-state solution is not a progressive cause and neither is a single-state solution — they are just possible means to an end. The only possible goal for progressive politics in Israel/Palestine can be full human, civil and political rights for everyone living on this land. 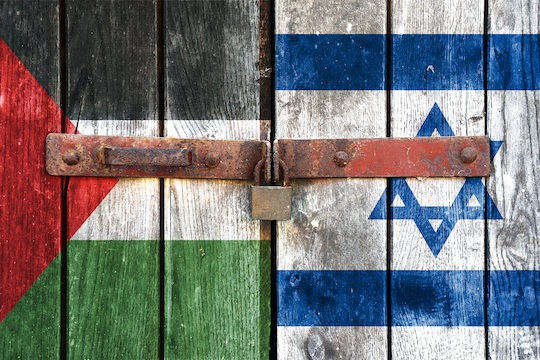 [Illustrative photo by Shutterstock.com]
Every now and then a comment on this blog attributes a position to me — one I thought I had been very careful to avoid taking. A misunderstood writer should blame only himself and not the readers. However, there is a specific point I always have trouble getting across, maybe because of the way it diverges from the way people tend to frame the political debate — and not just in Israel.

The issue at hand is a so-called final-status agreement in the Israeli-Palestinian conflict. I often get comments that assume I am preaching for an Israeli withdrawal from the West Bank and for the evacuation of settlements. Other comments take for granted that I am calling on Israel to annex the West Bank and give citizenship to all of the Palestinians.

The truth is that I am not a follower of either of these ideas – or if you prefer, I accept both of them under certain circumstances.

My principal political position is opposition to the occupation. By “occupation” I don’t mean the legal status of the land administrated by Israel. I am referring to the existence of a regime that separates the two populations on ethnic lines and grants them different rights, and to all the policies that are part and parcel of that regime: the military court system, the extra juridical assassinations of people living under Israeli sovereignty, the lack of freedom of movement, the limits on freedom of speech, and many more such measures.

I support equal rights for all people living in this land, between the Mediterranean and the Jordan River. Theoretically this can happen as part of a two-state solution, a single-state solution and in various hybrids of the two. All these solutions could just the same preserve a situation where there are no equal rights and Jews continue to rule over the Palestinians but through different measures, much like what happened in Gaza following the withdrawal of IDF forces and 9,000 settlers in 2005. A person can state that he or she is in favor of the two-state solution or that he or she supports applying Israeli civilian law – instead of a military regime – in the West Bank, but such making such statements guarantees nothing.

Even when such final status plans are presented in their ideal form they all have considerable flaws. The game in which progressives bring up ideas for resolving the conflict and the Right finds holes in them is a lost cause. In fact, the entire debate on solutions might be intellectually intriguing but its only importance is as counterweight to the claim that the conflict is some type of given state of affairs or a natural disaster that cannot be solved. One needs to put alternatives on the table, but they shouldn’t be turned into a cult.

One of the major problems in Israel is that the two-state solution was transformed from a means — to ending the occupation and its evils — into a goal. This is a disastrous development. There is no “peace camp” in Israel and no major political force seeking justice; there is only a “two-state camp,” which is something completely different. If a peace camp is having trouble implementing the two-state solution, it looks for just alternatives which will end the occupation and diminish its evils. But when a two-state camp has trouble implementing a two-state solution, it stops looking for any sort of solution and instead becomes a supporter of the status quo with all its inherent policies, such as the need to kill 2,000 people in Gaza in order to maintain the current state of affairs.

This is why progressives need to go back to opposing the occupation, and they need to do it actively — not just through lip service about “a diplomatic process” or two states or peace and all the newspeak Shimon Peres trademarked.

One must be very wary not to delve too deeply into the debate about solutions. More often than not, this conversation is a waste of time and political capital. Solutions are not the result of debate clubs but of political interests at a given moment in time. In other words, once Israeli society decides to end the occupation irrespective of the political circumstances, the power relations and various interests will determine the nature of the arrangements on the ground.

That is the moment in time where we, Israelis, will need to conduct an honest conversation about the kind of arrangement we would rather negotiate (Palestinians would do the same probably). Such a debate cannot exist now because the one thing we can all agree on is prolonging the status quo. This is what happens every day in the Israeli political system: Naftali Bennett, Avigdor Liberman, Yair Lapid and Tzipi Livni (or Labor’s Yitzhak Herzog, for that matter) can be part of the same coalition despite their contradictory options because they can live with the status quo. That is the common denominator that defines the entire system.

One final note: even when the final status agreement presents itself, it will be neither final nor static and we will need to continue working so that relations between Jews and Palestinians are conducted within an egalitarian and accountable political system and not through though exploitation or military force. There are no endgames in politics, certainly not here.

Related:
Who gets to vote in Israel’s democracy?
War is the new system of governance (and five other Gaza takeaways)
This is Netanyahu’s final status solution