The secret to understanding Israeli political behavior lies in the widespread (and fundamentally evident) notion that any change to the status quo is likely to bring more harm than good. 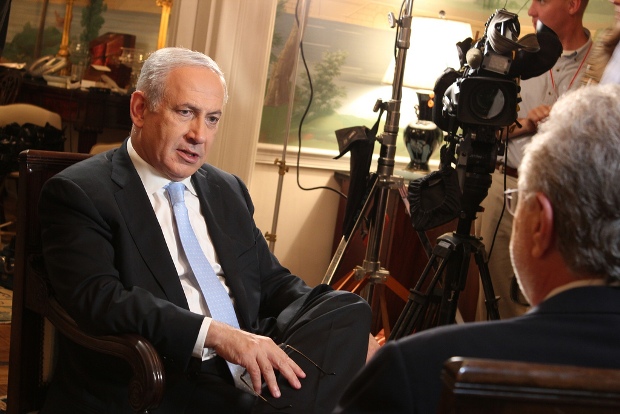 More than any other politician, Prime Minister Benjamin Nentanyahu (Seen talking to CNN's Wolf Blitzer) represents the Israeli outlook that the current situation is the best (photo: IsraelinUS/flickr CC by-2.0)

Even passionate advocates of Israeli policy wonder at times – often in private, but sometimes also in public – why the Israeli government doesn’t show a bit more urgency in pursuing a way out of the West Bank.

Israel, the saying goes, is faced with two options: A two-state solution and a one-state solution. The first option involves removing most of the settlements from the West Bank (but not necessarily most of the settlers); the second one starts with annexing the West Bank and changing the demographic balance between Jews and Palestinians living under full Israeli sovereignty. Israelis – both leaders and the public – seem to be rhetorically adopting the former while in practice moving towards the latter.

Advocates for the government would explain this paradox with security concerns and “Arab rejectionism.” According to this line, Israel has made up its mind to leave the West Bank and even engaged in several attempts to do so; only to be met with violence and hostility from the Palestinian side. Critics would claim that the Israeli policy objective is not maintaining a Jewish majority but rather colonizing as much land as possible, hence the settlements and the reluctance to leave the West Bank.

The most popular rationale is a blend of the two approaches: Israel wants to leave the West Bank, but it was taken hostage by a minority of rightwing nationalists and messianic settlers, mainly due to “Arab rejectionism” and the failure of the peace process. When Israelis will be made to understand the danger of the current political trend – and when the Arab side is ready – they will come to their senses and regroup behind the demographically-secure Green Line.

This rationale, however, doesn’t bring into account a third option before Israeli policy-makers, and before Israelis themselves: that of maintaining the status-quo.

The status quo as a viable political option is never discussed enough. The common wisdom is that it is “unsustainable”; many (myself included) also see it as immoral. The result is a general blindness to the advantages of the status-quo from an Israeli decision-making perspective, and therefore, a failure to understand Israeli political behavior.

The Israeli decision maker – from left or right – is actually faced with three options: Annexing the West Bank; withdrawing from it, or maintaining the current situation (military occupation under which a privileged Jewish population is living alongside a Palestinian majority with no civil rights). Within this framework, and especially right now, maintaining the status quo is probably the most rational option for Israelis.

Rational choice theory claims that we all try to pay minimum costs and get maximum benefits. The definition of those costs and benefits is subjective, of course. Bearing this in mind, let’s look at the options an Israeli policy-maker has before him: a two-state solution is likely to bring a near civil-war moment within the Jewish public, as well as considerable security risks. It is worth noting that no Palestinian leadership would be able to really vouch for Israel’s security, since we never know what the next leadership will be like (I explained this point in more detail here). At the same time, annexing the West Bank will cause a severe international backlash, as well as major legal problems – and that’s only in the short run. It is even more risky, politically, than the two-state solution. The third option is maintaining the status quo, while trying to minimize its costs and maximize its benefits. From a rational-choice perspective, this is the optimal option.

The many benefits of the status quo

For some reason, people find it hard to accept that the current situation is desirable for Israelis. It certainly isn’t optimal, but considering the alternatives, it is probably the best.

It’s enough to come on a week’s visit to Israel to understand the appeal of the status quo. Despite occasional outbreaks of violence in the south and north, Israelis enjoy stability, prosperity and a general sense of security. According to the theory of “convincing Israelis to abandon the West Bank,” this was supposed to be the right moment for concessions, but the exact opposite is true: When things are going so well, it would be totally irrational to move in any other direction, either by annexing the West Bank or by leaving it.

Israelis understand that instinctively, regardless of what they say in polls on the desired solution to the conflict. Actually, even in polls, when faced with the option of maintaining the status quo, Israelis are likely to prefer it to the two-state solution. A Palestinian state becomes the preferable option only when presented on its own (“do you support/oppose…”) or when it is compared to annexing the West Bank.

See for example question 6 of the January 2012 Peace Index: A clear Jewish majority (57.3 percent) agrees with the following statement:

… even long-term continued rule in the territories will not prevent Israel from remaining a Jewish and democratic state.

This result is consistent with previous polls, I was told. In a panel I attended at Tel Aviv University, Prof. Ephraim Yaar, who runs the peace index, explained that Israelis’ political choices are irrational, since they don’t elect leaders that reflect their support for the two-state solution. But his own polls prove the opposite: that Israelis actually support the status-quo, and choose their leaders accordingly. The record-breaking support for Prime Minister Netanyahu, a man whose entire political history is a tale of maintaining the diplomatic status quo, can be easily explained in this framework, and so can the collapse of the parliamentary peace camp. There is not one Knesset party that has leaving the West Bank as the single most important issue on its agenda today – mainly because everyone knows that the public prefers the current state of affairs. So maybe it’s time to stop blaming the settlers alone.

But aren’t Israelis concerned about the long run? Well, when making political choices, most people don’t pay much attention to the long run, and politicians are even more likely to be focused on the immediate impact of their decisions. Anyway, the “unsustainable” occupation is proving itself to be pretty sustainable thus far. In the last decade, and especially since the withdrawal from Gaza in 2005– a move that was initiated, as Sharon himself said, in order to prevent the establishment of a Palestinian state in the West Bank– Israel has been able to resist international pressure at a relatively low cost and maintain control over the territories it captured in 1967, while suffering the lowest number of casualties than at any other time. Never in its history has the gap – military, economic and in terms of international support – between Israel and its neighbors been so wide. The status-quo might not be perfect, but from the point of view of the average Israeli – not to mention that of his elected official – it represents the best alternative.

In other words, the major problem right now is that an inherently immoral order represents the most desirable political option for Israelis. All the left’s effort to demonstrate the problems the occupation creates – like the burden on the state budget – won’t help, since political choices are made based on alternative options, and right now the alternatives are more expensive, more painful, and more dangerous.

It should be noted that the status quo will remain the best option regardless of developments on the Palestinian side. Even if the Palestinians in the occupied territories recognize Israel as a Jewish state or vote Hamas out of office – even if they all join the Likud – from an Israeli cost/benefit perspective, keeping things as they are will remain preferable to the alternatives of either pulling out of the West Bank or to annexing it.

Current demands from the Palestinians are just smoke screens intended to disguise this unpleasant fact. Not only is the approach of “accommodating Israel’s needs” not likely to get concessions out of the Israeli leadership, a truthful analysis points to the fact that the better things get in Israel, the less changes to the status quo become rational; when thinking about a political strategy that will lead to the end of the occupation, we should bear this in mind.

I will address the desirable ways to change the Israeli decision-making equation in a separate post, but there is one last point I’d like to make. A lot of intellectual effort is put in the “one state vs. two states” debate, or in the attempt to analyze whether we are past the point of no return for the two-state solution. Certainly, reality on the ground might cause us to think that we did.

Yet these are for most parts false questions. The real issue is the balance between change and the status quo which has yet to be shifted. There is no way of telling whether we have passed the moment for the two-state solution because Israel has never faced the real choice between one and two states. It always faced the choice between one state, two states and the status quo. When it will be met with a real make-or-break decision, the political dynamic in Israel might fundamentally change. We are still very far from such a moment.