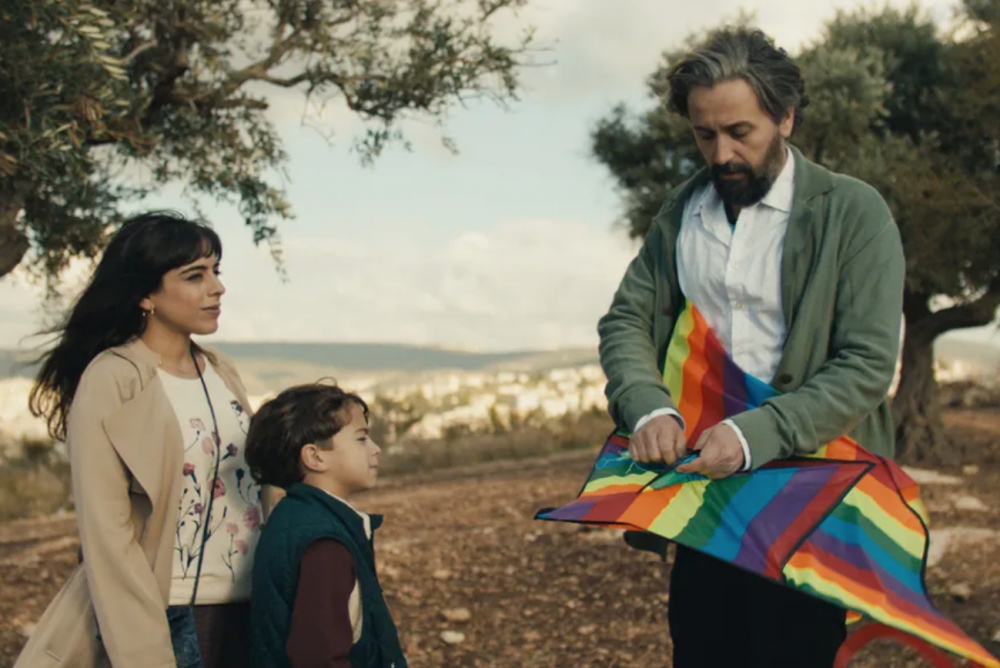 A still from the film "Let It Be Morning," directed by Eran Kolirin, based on the book by Sayed Kashua. (Courtesy of Dori Media/Les Films Du Poisson)

A film about a Palestinian citizen of Israel, with a predominantly Palestinian cast, based on a novel by a Palestinian author, won this year’s top Israeli film honor, the Ophir Awards. As the winner, it will automatically become Israel’s selection for the best foreign-language film category at the Oscars.

Directed by Jewish-Israeli filmmaker Eran Kolirin, “Let It Be Morning” scored a total of seven awards, including best director and screenplay for Kolirin, best actor for Alex Bakri, and best actress for Juna Suleiman. But the lead actors, who live in Germany, skipped the event.

“Under normal circumstances, I would feel happiness and gratitude for the award, but unfortunately that is impossible when there are active efforts to erase the Palestinian identity and the collective pain I carry with me in every role I play,” said Suleiman, in a statement that Kolirin read on her behalf at the ceremony.

Bakri, too, had a statement read on stage: “I know that there are those who will be angry about bringing up politics in this evening that celebrates art, but to my mind all art is political, and behind it is an artist’s responsibility to take advantage of every stage possible to speak out about a lack of justice.”

Most of the cast, including Suleiman and Bakri, refused to attend the film’s premiere at the Cannes Film Festival in July, due to its classification as an Israeli production, rather than Palestinian.

“Let It Be Morning” is based on a Hebrew-language novel of the same name by one of Israel’s most prominent Palestinian authors, Sayed Kashua, who emigrated to the United States in 2014, also out frustration over Israel’s treatment of Palestinians. It examines the social and political reality of Palestinian citizens of Israel through its protagonist, Sami (Alex Bakri), a Palestinian accountant living in Jerusalem, who returns with his wife and son to his home village for his brother’s wedding, only to be held captive there after the Israeli army imposes a lockdown. The sudden and unexplained siege forces him to grapple with his identity. Author Sayed Kashua, who is a Palestinian citizen of Israel, working in his house in Jerusalem, March 29, 2011. (Nati Shohat/Flash90)

“Films don’t have an identity,” said Kolirin. “I support my actors and stand by them. As I see it, the power is on my side. I can talk about the identity issue and bring it on. It’s a matter of power, and political discourse.

“I don’t know whether it’s good for the movie or will it increase our chances of winning,” Kolirin continued. “It doesn’t concern me; what concerns me is showing solidarity with the people who worked with me.

“I’ll be happy if the film reaches as many people as possible,” Kolirin added. “Film is meant to address the heart of the audience and open them to the new story they are not ready for.”

The actors’ statements at the Ophir Awards reflect the struggle all Palestinian artists face in Israeli cultural productions and institutions, said Suha Arraf, a Palestinian director, screenwriter, and producer, who also writes for +972 Magazine. When Arraf listed her feature film, “Villa Touma,” as “Palestinian” at the 2014 Venice Film Festival, ministers in the Israeli government accused her of stealing public funds and committing fraud, and the Israeli Film Council demanded that she return hundreds of dollars in funding. At the time, Kolirin delivered a statement in court in support of Arraf. In 2010, Scandar Copti, co-director of the Oscar-nominated “Ajami,” an unsparing drama about the eponymous Palestinian neighborhood in Jaffa, caused uproar when he said he was not representing Israel at the Academy Awards ceremony. The film’s listing as “Israeli” was merely a technicality, Copti said at the time — Israel’s public film fund covered 40 percent of its budget. “I can’t represent a country that doesn’t represent me,” he told an Israeli reporter.

“Our identity is part of our work, our creativity,” said Arraf. “For my first movie, I searched for funding everywhere in Europe and the Arab world, and it didn’t go so well. Eventually, I covered 70 percent of my budget using grants from Israeli foundations. It’s a budget I well deserve, as a citizen who pays her taxes. Nobody is doing me any favors.”

According to Arraf, Palestinian citizens only receive about 2 percent of Israel’s culture budget, despite making up 20 percent of the population. Given this limited funding, many Palestinian artists feel compelled to take on roles or join productions that contradict their lived experiences.

Still, Palestinian stories are not exclusively for Palestinians to tell, Arraf said. “To tell a story, you don’t have to be a Palestinian, or to belong. You have to identify, support, and stand by your actors. I respect and appreciate Eran Kolirin.” Ehab Elias Salami has been swamped with calls since he won best supporting actor. “Suddenly, I became famous. Where have you been in the last 20 years?” he quipped.

Salami plans to attend the Oscars, if and when he is invited — though he tries to avoid long flights. While Salami joined his cast’s protest and skipped the Cannes Film Festival, he did attend the Ophir awards. In his acceptance speech, he quoted Martin Luther King Jr., his idol: “I have a dream that the Palestinian people find justice, and all of us Arabs and Jews live in peace. We all deserve to live in a world with no tension or hate.”

“My speech came from my heart,” Salami told me in a phone interview, days after his win. “Anyone in my position who is appreciated for their work would be grateful and happy, and I am.”

Looking back, he questions his decision not to attend the Cannes Film Festival. Though he identifies as Palestinian and seeks justice for the Palestinian people, he would rather not focus on the labels, he said.

“I’ve been in the industry for 20 years, mainly in the Arabic community, and as a director, I connect to the soul, to the person, to the energy,” he said. “This is how I overcome the barriers and borders.”