Bassem Tamimi, the popular committee leader of Nabi Saleh, was arrested more than one month ago for his role in organizing unarmed demonstrations against the Israeli occupation. His arrest was largely based on evidence illegally obtained from a number of Nabi Saleh youth including 14-year-old Islam Tamimi. Yesterday, Tamimi’s trial began at the Ofer military court. Below is Tamimi’s full statement to the court. According to Jonathan Pollak, who was in attendance when Tamimi finished the statement, the military judge announced that the hearing’s protocol has been erroneously deleted. However, he refused to submit the full written statement to the stenographer. She went on to dictate a short summary in her own words for official record. 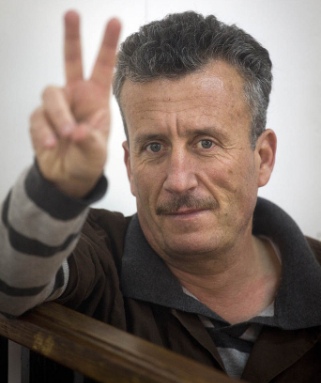 I hold this speech out of belief in peace, justice, freedom, the right to live in dignity, and out of respect for free thought in the absence of Just Laws.

Every time I am called to appear before your courts, I become nervous and afraid. Eighteen years ago, my sister was killed by in a courtroom such as this, by a staff member. In my lifetime, I have been nine times imprisoned for an overall of almost 3 years, though I was never charged or convicted. During my imprisonment, I was paralyzed as a result of torture by your investigators. My wife was detained, my children were wounded, my land was stolen by settlers, and now my house is slated for demolition.

I was born at the same time as the Occupation and have been living under its inherent inhumanity, inequality, racism and lack of freedom ever since. Yet, despite all this, my belief in human values and the need for peace in this land have never been shaken. Suffering and oppression did not fill my heart with hatred for anyone, nor did they kindle feelings of revenge. To the contrary, they reinforced my belief in peace and national standing as an adequate response to the inhumanity of Occupation.

International law guarantees the right of occupied people to resist Occupation. In practicing my right, I have called for and organized peaceful popular demonstrations against the Occupation, settler attacks and the theft of more than half of the land of my village, Nabi Saleh, where the graves of my ancestors have lain since time immemorial.

I organized these peaceful demonstrations in order to defend our land and our people. I do not know if my actions violate your Occupation laws. As far as I am concerned, these laws do not apply to me and are devoid of meaning. Having been enacted by Occupation authorities, I reject them and cannot recognize their validity.

Despite claiming to be the only democracy in the Middle East you are trying me under military laws which lack any legitimacy; laws that are enacted by authorities that I have not elected and do not represent me. I am accused of organizing peaceful civil demonstrations that have no military aspects and are legal under international law.

We have the right to express our rejection of Occupation in all of its forms; to defend our freedom and dignity as a people and to seek justice and peace in our land in order to protect our children and secure their future.

The civil nature of our actions is the light that will overcome the darkness of the Occupation, bringing a dawn of freedom that will warm the cold wrists in chains, sweep despair from the soul and end decades of oppression.

These actions are what will expose the true face of the Occupation, where soldiers point their guns at a woman walking to her fields or at checkpoints; at a child who wants to drink from the sweet water of his ancestors’ fabled spring; against an old man who wants to sit in the shade of an olive tree, once mother to him, now burnt by settlers.

We have exhausted all possible actions to stop attacks by settlers, who refuse to adhere to your courts’ decisions, which time and again have confirmed that we are the owners of the land, ordering the removal of the fence erected by them.

Each time we tried to approach our land, implementing these decisions, we were attacked by settlers, who prevented us from reaching it as if it were their own.

Our demonstrations are in protest of injustice. We work hand in hand with Israeli and international activists who believe, like us, that had it not been for the Occupation, we could all live in peace on this land. I do not know which laws are upheld by generals who are inhibited by fear and insecurity, nor do I know their thoughts on the civil resistance of women, children and old men who carry hope and olive branches. But I know what justice and reason are. Land theft and tree-burning is unjust. Violent repression of our demonstrations and protests and your detention camps are not evidence of the illegality of our actions. It is unfair to be tryed under a law forced upon us. I know that I have rights and my actions are just.

The military prosecutor accuses me of inciting the protesters to throw stones at the soldiers. This is not true. What incites protesters to throw stones is the sound of bullets, the Occupation’s bulldozers as they destroy the land, the smell of teargas and the smoke coming from burnt houses. I did not incite anyone to throw stones, but I am not responsible for the security of your soldiers who invade my village and attack my people with all the weapons of death and the equipment of terror.

These demonstrations that I organize have had a positive influence over my beliefs; they allowed me to see people from the other side who believe in peace and share my struggle for freedom. Those freedom fighters have rid their conscious from the Occupation and put their hands in ours in peaceful demonstrations against our common enemy, the Occupation. They have become friends, sisters and brothers. We fight together for a better future for our children and theirs.

If released by the judge will I be convinced thereby that justice still prevails in your courts? Regardless of how just or unjust this ruling will be, and despite all your racist and inhumane practices and Occupation, we will continue to believe in peace, justice and human values. We will still raise our children to love; love the land and the people without discrimination of race, religion or ethnicity; embodying thus the message of the Messenger of Peace, Jesus Christ, who urged us to “love our enemy.” With love and justice, we make peace and build the future.

Read more on the protest in Nabi Saleh: